Democrat Michael McMahon will be Staten Island’s next district attorney, after defeating first-time candidate but longtime prosecutor Joan Illuzzi to flip what had been a Republican seat for 11 years.

Mr. McMahon, a former congressman and city councilman, garnered 55 percent of the vote to Ms. Illuzzi’s 45 percent, according to preliminary Board of Election results with 97 percent of votes tallied.

The race had boiled down to a battle between a career politician and a career prosecutor—with Mr. McMahon charging that Ms. Illuzzi had no civic or community experience and Ms. Illuzzi charging that Mr. McMahon had no law enforcement experience, and each candidate offering differing visions of what the district attorney ought to do. Mr. McMahon argued the role was to lead the office and fight for funding, while Ms. Illuzzi argued the DA should be more hands-on. Both candidates spoke about the need to stem the tide of Staten Island’s heroin epidemic, which has resulted in many overdose deaths and fueled other crimes; both had little positive to say about Mayor Bill de Blasio, who is unpopular on Staten Island.

The district attorney’s seat was open after Republican Daniel Donovan was elected to Congress in a special election in May, filling the seat vacated by former Congressman Michael Grimm, a Republican, after he pleaded guilty to tax fraud. Ironically, Mr. McMahon had held that congressional seat for two years before Mr. Grimm defeated him at the polls in 2010, and Mr. McMahon has since been out of elective office.

Despite the borough’s Republican leanings, the conventional wisdom was that Mr. McMahon was the favorite for the seat, given his high name-recognition as a former Island-wide elected official and North Shore councilman. He also had significantly more cash-on-hand, after significantly out-raising Ms. Illuzzi throughout the campaign. Still, many expected the race to be tight and ahead of the today’s election it seemed Ms. Illuzzi had some momentum—she was wrested back the Conservative Party line in an upstart primary challenge, was endorsed by the Daily News, the New York Post and the Staten Island Advance.

Ms. Illuzzi faced challenges beyond her lack of name recognition. She had waded into a Republican party wracked with infighting, fractured by a rift between several Republican elected officials and former borough president and congressman Guy Molinari, who served as Ms. Illuzzi’s campaign chairman. Some GOP elected officials were slow to endorse her—though popular State Senator Andrew Lanza did offer his endorsement last week, despite a spat with Mr. Molinari that saw them trading insults in speaking to the Observer. Staten Island Borough President James Oddo, a Republican and no friend of Mr. Molinari’s, did not endorse in the race at all. And Ms. Illuzzi’s campaign spent much of the money it raised on a lawsuit challenging petition signatures gathered by Mr. McMahon that she eventually dropped.

The race was a must-win for Mr. McMahon, whose future political chances would have been grim had he lost a second Island-wide race after losing his congressional seat. It is also likely a welcome change for the Staten Island Democratic Party and its chairman, John Gulino, after the Dems lost two congressional races in the span of just a few months—first, when the indicted Mr. Grimm defeated Dominic Recchia last November despite Mr. Recchia’s impressive campaign coffers and second, when Mr. Donovan beat Brooklyn Councilman Vincent Gentile in the special election in May.

His campaign had been run by campaign manager Jonathan Yedin, who was district director of Mr. McMahon’s office in 2008 and ran his unsuccessful 2010 congressional bid. But Mr. Yedin resigned from the campaign last month, after the political consulting firm he works for, the Advance Group, was fined for its conduct in two unrelated City Council campaigns.

Mr. McMahon was also buoyed by the support of a slew of unions—including the vast majority of the major law enforcement unions and all of the unions representing NYPD police in the city.

Among the many issues Mr. McMahon will have to grapple with as district attorney is the heroin epidemic on Staten Island—something he told the Observer last month had spurred him to get into the race in the first place. During his campaign, Mr. McMahon also spoke of lowering the rate of domestic violence on Staten Island, cracking down on gun violence and bringing more budget money into the district attorney’s office, something he argued he was better fit to do than Ms. Illuzzi given his political experience.

One thing that neither candidate spoke much about on the trail was the relationship between the DA’s office and communities of color on Staten Island, which has been seriously strained since a grand jury convened by Mr. Donovan declined to indict a white police officer in the death of Eric Garner, an unarmed black man who died when the officer used an apparent chokehold while trying to arrest him for allegedly selling untaxed cigarettes. When asked about the issue, both candidates had expressed some desire for more transparency into the grand jury process in some cases.

“I would certainly work with the state DAs association and the legislature to bring a more modern level of transparency to to the process,” Mr. McMahon told the Observer last month. 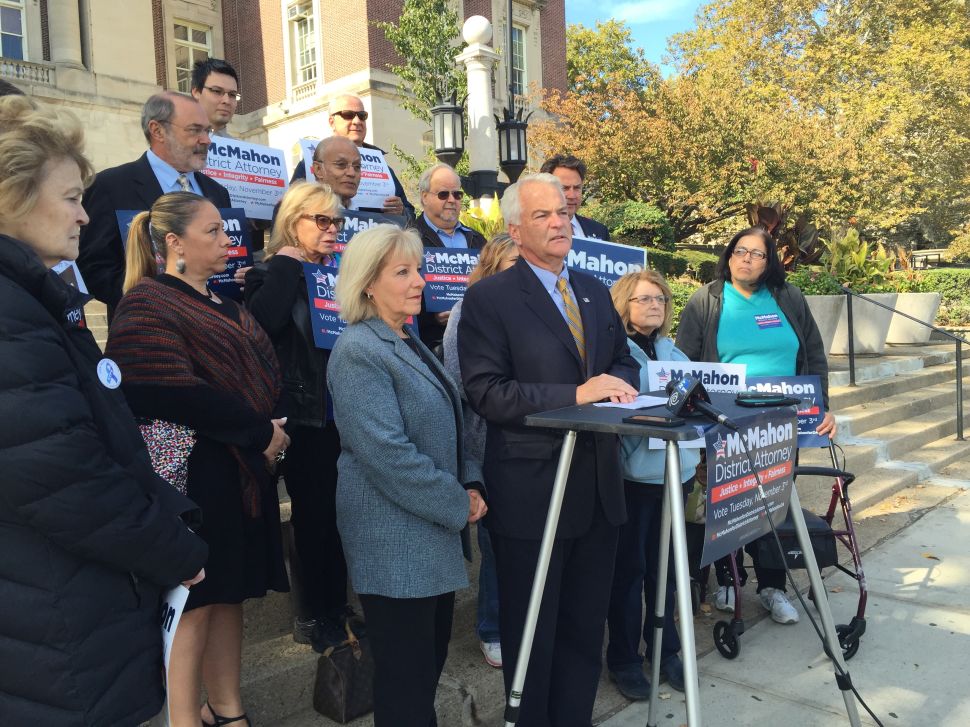