After “The Day of the Doctor,” that momentous 50th anniversary episode, we all wondered what would come next. So much had changed—Gallifrey was still out there, somewhere! Surely the show would have to address these new developments right away.

Of course, that’s not what happened. Eleven and his bowtie continued on their relentless march toward Trenzalore, and the search for Gallifrey seemed to fall off the radar, save one tantalizing hint by Missy last series that turned out to be just a tease.

But the consequences of that episode had to come sooner or later, and here they are at last. No, Gallifrey is not yet on the radar, but another plotline left loose on that fateful Day suddenly gets picked up in “The Zygon Invasion.”

I confess, I had all but forgotten about this particular loose end, but the episode helpfully gives us a little recap. The shape-shifting Zygons staged a takeover within UNIT, so the Doctors (all three of them) trapped both sides into negotiating the “perfect peace treaty” by making them forget which side in the negotiations was which.

Now, we get the outlines of this peace treaty: The Zygons, whose home had been destroyed, were allowed to leave some of their people on Earth, so long as they took human form and assimilated into our culture. A whole generation—20 million Zygons—took human faces and went incognito. As long as they stayed hidden, the ceasefire would hold.

The peace treaty was cemented by fan favorites the Osgoods (Ingrid Oliver), a UNIT researcher and her Zygon counterpart. The pair negotiated the ceasefire’s terms, but they went further than this: By refusing to acknowledge that they were in any way different from one another, they became the peace treaty’s physical embodiment. If they were both the same, full sisters, neither wholly human nor fully Zygon, then they proved the reality of lasting peace via assimilation.

But then one of the Osgoods was murdered by Missy, and her surviving sister is too consumed by grief to do much peacekeeping. So all hell starts breaking loose. A rebel faction of Zygons—a relatively small number, the show insists, hashtag notallzygons—breaks away and starts killing people. Their demand: They want to be allowed to live openly on Earth as blobby octopus-sucker-faced Zygons, rather than having to pretend to be humans.

Or maybe that’s just an excuse, and they really want to take over the whole world and kill everyone. It’s not totally clear. They’ve taken as their slogan “truth or consequences,” or presumably: “Let us tell the truth about ourselves to humans or be prepared to suffer the consequences, i.e. we’ll zap them all into gross little blobs that look like huge electrified dust bunnies.”

So the Doctor, who seems less and less reluctant to play President of the World with each passing UNIT encounter, dispatches everyone to different parts of the globe to try to figure out the crisis. Which just seems like a lot of useless running around, to be frank.

Kate Lethbridge-Stewart is sent to the town of Truth or Consequences, N.M., where the Zygon rebels seem to have begin their invasion of America—I guess for symbolic reasons? There she meets the town sheriff, who seems like the only remaining human in town, until she reveals herself to be yet another Zygon.

The Doctor goes to a fictional former Soviet republic where the Zygon rebel leadership has holed up, just in time to stop UNIT forces there from just bombing the place, because the Doctor is a pacifist whenever it’s least convenient for everyone around him. But a ground assault doesn’t work, because the shapeshifters can be anyone they want to be, and it’s really hard to shoot someone who looks exactly like your mother. So instead the Doctor finds the surviving Osgood and gets out of dodge just before they bomb the place to hell.

And Clara and Kate’s assistant Jac hang out in London, where they discover that the Zygons are stockpiling human bodies in caves underneath the city. Too late, Jac realizes that these pods contain people that the Zygons have taken the form of. And since one of the pods has Clara’s face, that means the Clara she’s been hanging out with all day is really…the head of the rebel Zygons, named, oddly, Bonnie.

Bonnie-with-Clara’s-face apparently kills Jac and a bunch of UNIT soldiers, and then fires a surface-to-air missile at the plane carrying the Doctor and Osgood, sending us into yet another cliffhanger in which the fate of Clara or the Doctor or both hangs in the balance, and if you’re keeping score, that’s three already this season.

This is the point at which I usually gripe about all the things in the episode that didn’t really make a whole lot of sense. I mean, if Clara was really Bonnie the whole time, why bother leading Jac down into the crypts of London to find the pods and reveal the whole plan? And if the New Mexico sheriff was likewise a Zygon, why engage in this extended monologue about how monsters came to their little town?

But for me these strange quirks actually added to the interesting weirdness of the episode. See, on the face of it, the rebel Zygons’ demands don’t seem particularly awful. In a certain light, they seem reasonable and humane. (Assuming, that is, that what they really want is to just live openly as aliens, not, you know, kill everyone.)

“We demand the right to be ourselves,” they say. “We want the truth of who we are to be acknowledged. We want to live as ourselves at any cost.” Isn’t it really hard to argue with people who just want to live their own truth?

Unless, of course, that “truth” isn’t what it seems. Because the metaphor of the Zygons just wanting to come out of the closet is complicated quite a lot by the example of Osgood. Osgood, who refuses to be categorized as either human or Zygon. (Another “hybrid,” which is shaping up to be the true through-line of the season.) When the Doctor presses her about which one she is, she responds: “I don’t answer that question. Because there is no question to answer.”

See, the treaty that was negotiated on the Day of the Doctor was truly predicated on the idea that the Zygons who remained on Earth would no longer be fully Zygon. From now on, they’d always be part human. Remember, this was not a group of Zygons who came and settled—it was a new generation that was hatched and raised on Earth. Essentially, they were natural-born earthlings, just with different DNA. And by extension, even if they never knew it, every human being on Earth, in order to maintain the peace, became at that moment a little bit Zygon.

Osgood represented this ideal, the only real way the peace could last: true hybridization. She wasn’t just the emissary of the peace treaty, the characters keep saying; she is its embodiment. “I am the peace. I am human and Zygon.”

This is what elevates this episode beyond what was otherwise essentially just a retread of the cheesy 1980s sci-fi show V. Here, the Zygons don’t just look like humans. They need to take the form of an actual existing human whom they take an imprint from, and as long as that human is alive, they remain linked.

Suddenly it makes sense that Bonnie and the sheriff don’t act like villains for most of the episode. They’re acting like the people whose faces they share because they continue to be those people in some way. When they want to pretend to be those people for a while, they’re better than good actors—they’re perfect, because they’re essentially letting their other selves drive. Until, of course, they need to put their nefarious plans into action, when the claws and/or suckers come out.

We’ll see how this all plays out next week; in the meantime, let’s just hope Bonnie/Clara has very bad aim with that bazooka. 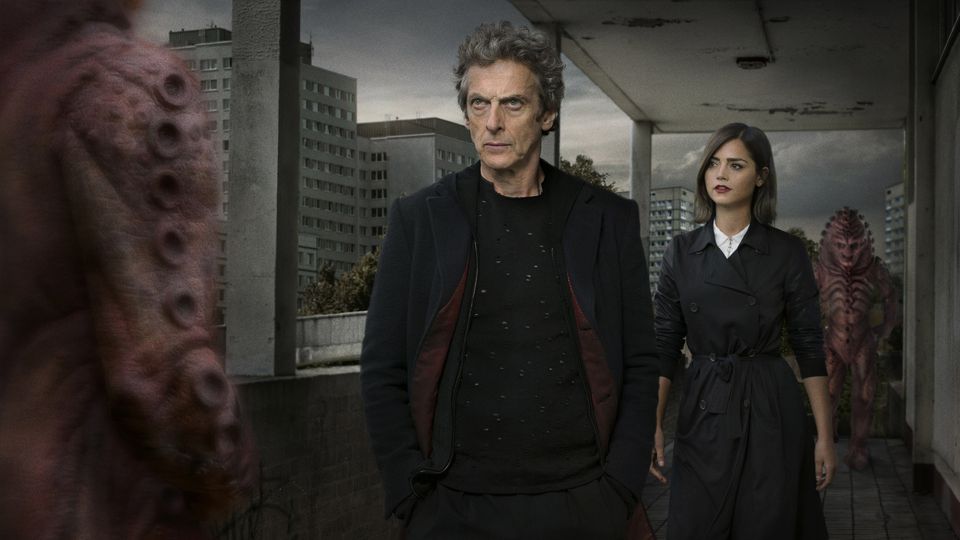