On the basis of “The Zygon Inversion,” I’m now ready to call it: Series 9 is the best season of Doctor Who yet. Hands down.

(At least, the best of the rebooted show; I’ll always be a Tom Baker guy. But then we do have four more episodes remaining this time out, so who knows?)

The writers are turning in episode after episode of meaty, interesting, weird, funny, though-provoking, relevant stories without falling into the trap of getting overblown, stentorian or maudlin.

Sure, I wasn’t a huge fan of that Muppet alien lion two episodes ago, and the last episode had a bit too much flailing about for my taste. But both moved the overall story forward in interesting ways, and without a lot of the hand-waving that too often characterizes the show’s season-long arcs. This season’s through-line is mostly just a broadening and deepening of the Doctor’s understanding of his relationship to humanity, as embodied in (but not limited to) Clara. (Who knew the old guy still had so much to learn?)

And of course none of this would be possible were Peter Capaldi not so completely hitting his stride as the Doctor. The slight stiffness of his characterization last season is gone, now replaced with a deeper and more appealing reserve. He manages to convey this quality, a slight distance and sadness, even as he japes and puns and says very silly things, a feat his two predecessors aimed at (from opposite ends) but never quite achieved. Capaldi’s Doctor is simply mesmerizing. And it’s an astonishingly generous performance—his rants and manic faces and jumping around don’t suck energy away from those around him, but elevate them, and the script, in magical ways.

Take the climactic scene of “The Zygon Inversion,” set up, intentionally, as a sort of Let’s Make a Deal game show. The two contestants, Zygon leader Bonnie (wearing Clara’s face) and UNIT science head Kate Stewart face off over their respective wargames boxes, while the Doctor shouts at them in a twisted version of diplomacy. He gets most of the lines, but it’s Jemma Redgrave and Jenna Coleman really shine here, as it dawns slowly and sadly on both of them in turn that the only way out is through: Pushing a button and hoping for the best just won’t cut it, when the terms are laid out so starkly.

The episode—after some clever scenes in which Bonnie and Clara fight for control of their shared consciousness—is actually in the end a kind of puzzle, as much for the audience as it is for the contestants in its game show. And the more we think about it, the more layers this puzzle turns out to have.

The Osgood Box is a puzzle box. We’re led to think the trick here is that there are really two boxes—just like Osgood, they’re a pair. But that’s not much of a trick. After all, the Doctor reveals to Bonnie right away that the box she wants, the one that will unmask all of the Zygons is the blue one. But when she opens that one: two more buttons. Labeled “Truth” and “Consequences.”

“Safeguards upon safeguards,” the Doctor says. One button will unmask the Zygons, while one will make them human. In the other box, one will kill all the Zygons while the other will level London. As Kate and Bonnie try to work out all of the possible scenarios, it turns out to be a very cockeyed version of mutually assured destruction.

But none of this is the trick of the Osgood box(es). These aren’t actually levels of safeguards at all. The real trick of the boxes is that they’re both empty. Not just the same on the outside, they’re exactly the same on the inside. Just like the Osgoods continually insist about themselves—they’re no different from one another. And just like the Osgoods continually insist, that’s the whole point. Asking “which one are you” is useless. The only truth is the truth of the identical boxes.

See, despite all of the precautions the Doctor and Osgood put in place to make sure the Zygons don’t find the box, the truth is that they always wanted the Zygons to find it. (Why else leave these videos teasing the box as if it is a riddle to be solved?) The box is a way of showing the Zygons—and the humans—what war really looks like, when you can see the universe from a Doctor’s-eye view. And from that perspective, war is so horrible and so stupid. From that vantage, starting a war has to seem like the most ludicrous thing there is, no matter how strong your grievances or your convictions.

Not that this plan is guaranteed to work. It’s played as a joke, but in the end the Doctor reveals that he has erased Kate Stewart’s memory and knowledge of the box 15 times now. It seems that this Truth or Consequences crusade has actually been going on for a while, and what we are watching represents the final attempt by the Doctor, after 14 failed ones, to use the boxes as an object lesson to find a diplomatic solution to the war.

This opens up a Groundhog Day­-like scenario where the Doctor runs through his spiel each time with variations, finding the right words to use to convince them. And Kate and Bonnie keep ignoring the lesson, giving up on peace and (ineffectually) pushing the mutually assured destruction buttons. After which, the Doctor has to erase their memories and start over, each time tweaking the part of his speech that tipped them over into violence.

What finally convinces them, of course, is the Doctor’s own experience on the last day of the Time War, in which he was faced with a similarly terrible decision. And the parallels here—a box, a button, a world’s destruction—represent some of the best writing Doctor Who has ever offered. This scene could have been massively mishandled. “The Day of the Doctor” was so huge a moment in the history and mythology of the show that simply referencing it would have seemed like lazy shorthand. Instead “The Zygon Inversion” chose to remind us of a small, simple element of that momentous day: that it was Clara who caused Eleven to pause before killing a world. That it was her quiet tears that made him stop and reconsider.

“I was going to wipe out all of my own kind. Man, woman and child. I was so sure I was right.”

“The same thing that happened to you—I let Clara Oswald get inside my head. Trust me: She doesn’t leave.”

This is Doctor Who at its most powerful. Capping off the story of the week with an explanation that drives forward large stories (the fate of Gallifrey) and smaller ones (Clara’s relationship to the Doctor)—countering the show’s huge questions (the horror of genocide) with its most important theme (the need for compassion and forgiveness)—while making us smile with the shock of recognition.

A play on words that isn’t a joke at all: “inside my head.”

It’s the realization of something the Doctor has known for a while, as have we. That he can no longer do any of this without her. 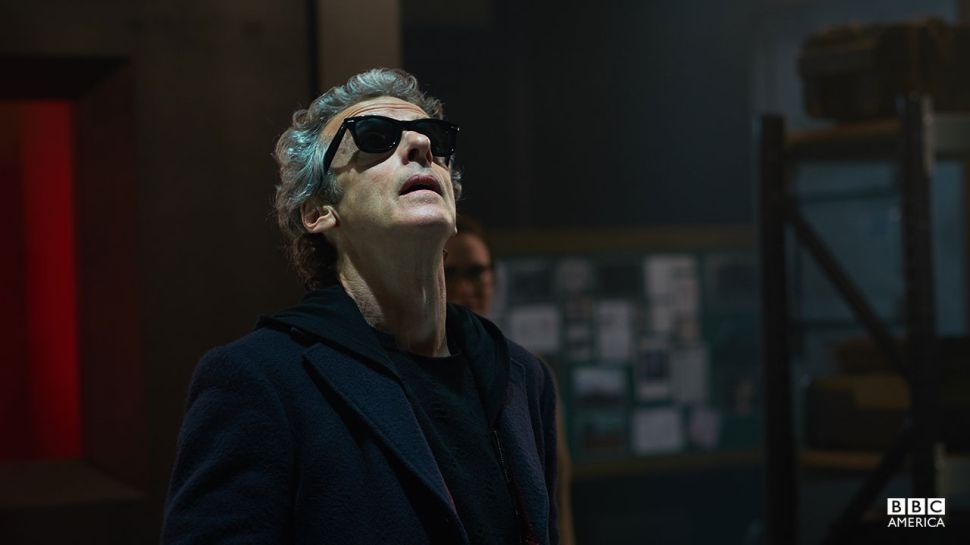