You knew this was coming. You had to know. There was a countdown, real as the one on the nape of Riggsy’s neck.

How many times this season has the Doctor already thought Clara was dead? At least three: vaporized by Missy, taken to “Valhalla” by the Mire, killed by Zygon Bonnie. Each time she cheated death, we got a little closer to the realization that the next time, or maybe the one after that, was going to turn out to be more than just a close call.

It doesn’t make it any easier to bear, but there you go. From the very first episode this season, the show has been preparing us for “Fear the Raven.” Clearly the Doctor has been preparing himself for it too. Ever since he met Ashildr, it has come sharply into focus for him: the girl who lives forever stacked up against the one who…won’t.

But the seeds of this (totally avoidable, by the way!) tragedy were sown earlier, last season, when Clara spent an inordinate amount of time impersonating the Doctor. Evidently she liked how that felt when she tried it on. Because more and more, she’s been emulating his reckless bravado. The Doctor’s noticed: When Clara’s giggling her ass off while hanging on by her ankles as the TARDIS lurches over London, he observes to Riggsy, “It’s an ongoing problem.”

But that’s super dangerous, playing Doctor. (Heh.) Just ask Ashildr, whose human brain can’t keep up with her Doctor-like lifespan. Likewise, the Doctor says, Clara’s body is just more breakable than his, too breakable to have her diving headfirst like he does into harebrained schemes, such as taking over Riggsy’s death sentence. Then again, she’s done plenty of even more reckless things, and she’s survived them all, until now.

The oddest thing about “Fear the Raven,” and the most interesting, is just how resigned to it all the Doctor seems. Sure, he fights to save Clara, but he also seems to know what’s coming. When he discovers that Riggsy’s tattoo is a death sentence, the mark of the “quantum shade,” he hesitates somberly for a few seconds before launching a plan to save him. He senses that this is all going to end very, very badly.

And it’s strange, then, that he seems to miss so much of what’s happening as it unfolds. The cleverest man in the world is sitting at the middle of a mystery, with obvious clues lying all around him, but he picks up on only a few of them.

He should have seen right away that nothing here was as it seemed, that Riggsy’s death sentence was a red herring meant to lure him in. He should have known this immediately and solved the mystery in seconds. Clara would have had no time to make her idiot move, he would have found a way to save the Janus woman without getting that teleporter stapled to his arm, and all crises would have been averted. Instead, he follows only the clues that Ashildr means him to as she leads him down the garden path to his own downfall and Clara’s demise.

What is he overlooking? Well, for starters, the fact that this was all a trap. I mean, it is explicitly explained to him that this is a trap. He says they’re looking for a street that has disappeared from maps, and Clara says “Like a trap street.” (Trap streets are fake streets put on maps to catch copyright infringers. See also: Mountweazel.) The Doctor looks straight at her in near-shock: “What did you say?” But then he doesn’t follow up. (I certainly can’t be the only one who was picturing Admiral Ackbar at this point.)

Not that this is the first time the Doctor has walked knowingly into a trap—it’s how this season started, after all—but still, the moment he saw that Ashildr was behind it, he should have realized that he was the target. And once he knew that, he should have been able to puzzle it all out, rather than wasting half an hour trying to convince hostile aliens that Riggsy didn’t kill anyone.

Then there is the fact that the street it all takes place on is itself a realm of illusion, where everything is made to look like what you think you should see, rather than what it is. The Doctor knows this is a place where everything he sees is altered to fit “the compass of your expectations,” and yet he doesn’t immediately think, “Oh so I’m seeing a murder mystery because that is what I want to see, when this is actually nothing of the sort.”

(Also, by rendering the shade in the form of a raven, Ashildr is dropping her own little Edgar Allen Poe-shaped hint that she’s playing off the Doctor’s own sense of himself as a great detective.)

Finally, he should have realized by now that Ashildr is a master of smoke and mirrors. Even as a young girl, when he first met her, she defeated the Mire by creating a “dragon” out of two-by-fours and spit, and then making it seem real. When he next encounters her, in the 17th century, she is making her tiny self seem like a fearsome highwayman using only a mask and a fake voice. Surely this latest version is up to something similar, using the outward form of a murder mystery to disguise something much more devious

But alas, the Doctor overlooks the clues until it is too late, and he is trapped into whatever grim fate Ashildr has sold him into in exchange for protection. And meanwhile Clara plays her reckless stratagem, dooming her to a very sad and affecting onscreen departure. It is, as they say, a good death. She dies doing what she loved. And she faces death with grace and bravery, stopping to say goodbye and telling the Doctor exactly what he needs to hear: That taking revenge is the wrong path here, that he’s not very good at it anyway, and that the compassion and forgiveness that have always been his lodestar must remain in place.

It is left ambiguous whether he concedes. He frankly seems shellshocked by the whole thing, in part I think because it all seems so accidental and random. Ashildr didn’t actually mean to hurt anyone—Riggsy was always supposed to live. And there’s a sitcom quality to the fact that she decides to go ahead with her own plan without telling the Doctor. If they had just talked about it, none of this would have happened.

He’s also just blindsided. He must have known there was some kind of trap here. And he knew that one day he’d have to pay the price for saving Ashildr. In “Before the Flood” he says that messing with the rules of death is an abomination—but there he is doing it, one episode later. He knew it would come back to hurt him eventually. He just seems to have assumed that he’d pay with his own life, not Clara’s. (I mean, why do you think he’s still carrying around his last will and testament all the time?)

And his life may certainly be in jeopardy now as well, as he is teleported into the clutches of whoever paid Ashildr off to take such dangerous and elaborate measures to entrap him.

We have a week until we find out who that might be—a small space in which to mourn Clara. A remarkable woman, a character who grew from being more a riddle than a person into one of the Doctor’s most formidable and capable companions. Clara Oswald, you will be missed. 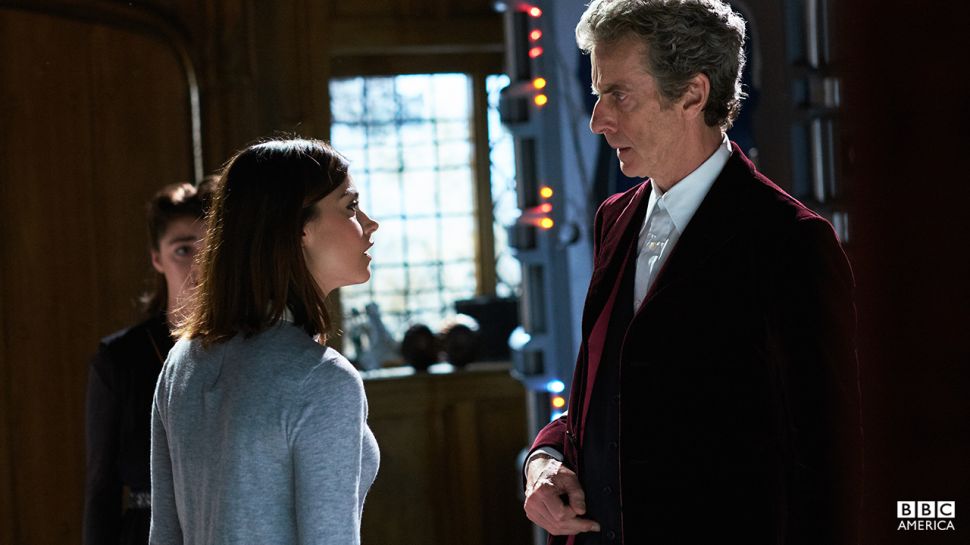