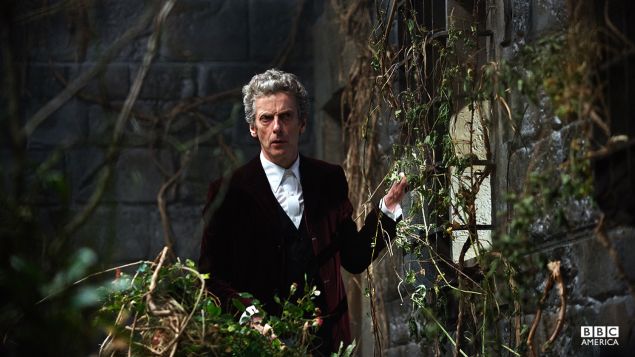 Ever hear that Radiolab episode with the clip of the woman who repeats the same conversation over and over and over? She’s got temporary amnesia, and every 90 seconds or so she forgets the last few weeks. But since the conditions she’s in are exactly the same—she’s in the same place (a hospital bed) with the same person (her daughter)—when she “resets,” she ends up saying the same exact things all over again. It’s kinda freaky.

The Doctor finds himself in the same situation this week, though of course he doesn’t realize it until near the end of the episode, doesn’t understand that he’s done all of this before. Many, many times.

For most of the episode, he’s trapped inside kind a of clockwork castle, pursued by a veiled creature that is a manifestation of one of his worst childhood fears (shades of “Listen”), which only stops chasing when he confesses something that he has never told anyone before. Then whole floors of the castle spin around, lock into new positions, and the chase is on again.

Lest we forget, the Doctor is also in deep mourning for Clara, whose death he has witnessed only moments before. And in this near-solo episode (a brilliant feat on the part of both Peter Capaldi and director Rachel Talalay), when the Doctor has moments of doubt, fear and confusion, he conjures up a phantom TARDIS with a ghostly Clara to spur him on and act as a sounding board for his puzzle-solving mind. A teacher even after death, Clara pushes him via questions on the TARDIS chalkboard to figure out where he is, what is being asked of him, and how he can escape from it.

Alone and without anything to fall back on—no companion, no TARDIS, not even a villain to outsmart—the Doctor is terrified. This may be the most scared we’ve ever seen him. The maddening puzzle he finds himself inside is designed specifically for him, tuned to his own fears and doubts. And it works. Which suggests to the Doctor that this is his own private hell, one he thinks he probably deserves, seeing as he just let his best friend die. There are certainly moments when he does seem simply on the verge of giving up.

But the castle doesn’t only want his fear; it wants his confession. It turns out to be a sort of torture chamber, meant to break his will until he tells it what it wants to know: that the Doctor didn’t leave Gallifrey all those years ago because he was bored, he left because he was scared. Scared of the hybrid of Time Lord prophecy, whose identity he alone knows. And his final confession is supposed to be the identity of that hybrid. But this is a secret he would rather die than divulge.

So die he does. Over and over and over. But not before finding a way to reset the whole castle, including his original arrival via teleport, and to leave himself—his new self, newly transported into the castle from 2015—a cryptic message that keeps the whole cycle going.

Remember that woman with amnesia? The Doctor is the same way, re-arriving in the castle with no memory of his previous go-around(s), and so, because the starting conditions are precisely the same, he goes through (almost) exactly the same scenario, again and again and again. He figures out again that he has to die, again resets it, again leaves himself a message, and once again dies in agony. For literally billions of years. If that’s not hell, I have no idea what is. (And if that’s not penance, then who can ever be forgiven?)

The message that the Doctor leaves for himself is a single word: “Bird.” He realizes this refers to a story by the Brothers Grimm (who were on the Doctor’s darts team, natch) about a bird that pecks a mountain down over eons. In the story, this unimaginable stretch of time is “only the first second of eternity.” Given a long enough timeline, the Doctor realizes, he can even punch his way through a 20-foot-thick wall of “azbantium,” 400 times stronger than diamond.

And he does in fact punch his way through, dying billions of times, advancing a fraction of a fraction of a millimeter each time. The filmmaking here is some of the most gorgeous we’ve yet seen on Doctor Who, as we see him repeat the scenario over and over, getting slightly deeper into the wall each time, slightly further in his Grimm story each time, before the nightmare creature overtakes him.

Until finally he breaks through and discovers what the astute viewer will have noticed by now: a clockwork castle, that spins around and around each time it hears a new confession? Sort of like a “confession dial”? See, he’s been inside this odd little series-spanning McGuffin the whole time.

Last week, when Ashildr grabbed the Doctor’s confession dial from him and asked him what it was, he said, “In your terms, a last will and testament.” But that’s just what he was told. When she followed up with “How does it work?” he responded, tellingly, truthfully, “I have no idea.”

But now he has an inkling, and so do we. More than a will, a confession dial is meant to extract someone’s final secrets before sending them to their final rest. And who could have done that but the High Council (or maybe the War Council?) of Gallifrey, where he now stands, having found it after all this time. And now he’s on the warpath, because he knows the truth of the prophecy, the whole season coming full circle: He’s the hybrid, the one destined to destroy Gallifrey after all.

Like all such mind-boggling Doctor Who episodes, though, “Heaven Sent” opens up more questions than it even attempts to answer. For example, was the real purpose of the confession dial to get the Doctor to go through only one run-through and give up his secrets? If so, what would have been the use of killing him when he doesn’t tell? Or did the dial intend to have him figure out that he had the power to reset his life? But if so, wouldn’t its makers anticipate an unchanging loop with no new revelations each time?

Why did some parts of the castle keep resetting—the flowers he plucked apart, the food he ate, the dirt he dug up—but not the impenetrable wall he punched? Or the written word “bird,” which should have been erased? Why did Clara’s painting age, if nothing else did? Why did the stars move if he were inside the confession dial the whole time?

If the confession dial was a sort of trap, who sent it to Missy in the first place, in this year’s series premiere? If it was the Gallifreyans, why bother—why not just keep it on Gallifrey and transport him into it like they did anyway?

And hold on—if the big secret he was keeping the whole time was the fact that he himself is the hybrid, why just blurt it out now? Could have saved yourself a few billion years by just confessing, instead of going, as he put it, “the long way ’round.”

Finally, if the Doctor really is the one destined to destroy Gallifrey—and if he now seems to think this is a capital idea—then why on earth go to all that trouble to save it in “The Day of the Doctor,” and then go searching all over space and time for it?

Some of these—but clearly not all—will hopefully be answered in next week’s series finale, in which the Doctor is, after all these years, back home once 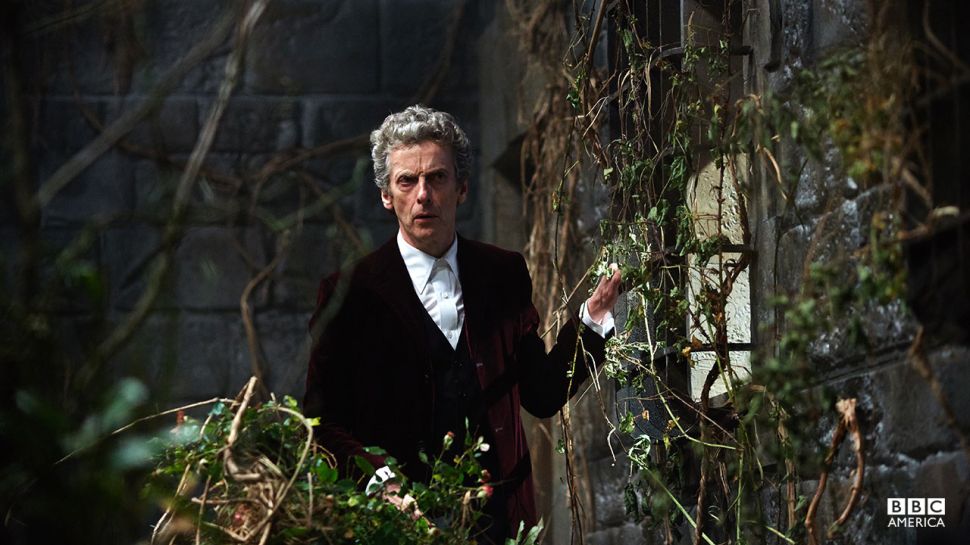