With serious media attention for hot-button topics like marriage equality, pride marches and the questionable sincerity of Caitlyn Jenner’s overexposed “transgender tipping point” on reality TV, times have certainly changed for the LGBT community—of course, it wasn’t always so. The gorgeous, heartbreaking and unforgettable film The Danish Girl is about the first known case of transgender surgery recorded in medical history—the story of Einar Wegener, the married painter in Denmark who bravely endured a pioneering gender reassignment operation in the 1930s and later became known as Lili Elbe.

With the seemingly limitless talents of Eddie Redmayne as a tender and wrenching centerpiece that cannot be topped, and Tom Hooper (The King’s Speech) in the director’s seat, this movie has multiple awards stamped all over it. It’s anyone’s guess whether the amazing Mr. Redmayne’s most prestigious performance will go down in the archives as Stephen Hawking in The Theory of Everything or as the tortured, androgynous woman trapped in a man’s body in The Danish Girl. But it’s a sure thing that he’ll be nominated for another Oscar.

It’s 1926 in Copenhagen and Einar is a painter of landscapes on the verge of success, and the passionate and actively heterosexual husband of a beautiful fellow artist named Gerda (Alicia Vikander), who specializes in portraits. Then everything is altered dramatically the first time he poses as a favor for Gerda while she’s waiting for her model to arrive. Reluctantly, he dons silk stockings and matching pumps, and his embarrassment slowly turns to a confusing confrontation with feelings he’s repressed since childhood. The unexpected ecstasy in Mr. Redmayne’s face of the way the fabric feels to his touch is a clue to things to come.

As Einar, he expresses a sort of unfocused gender identity that makes him neither masculine nor feminine, but when he smiles his eyes light up girlishly, and in Lili’s lingerie he turns downright sensual. Dressing for a masquerade ball, the delicate placing of his hands and crossing of his legs literally turns him on. Drawn inexplicably into a double life, as Einar and as his shy, alluring “cousin Lili,” he conceals a dual personality that nearly drives him to suicide. Based on Wegener’s actual diaries, published in 1933, Lucinda Coxon’s beautifully collated screenplay, from David Ebershoff’s book about Wegener’s life, tackles a complex subject with dignity and respect, leaving nothing out. In the process, you will learn more about gender crisis than you ever thought possible.

You experience firsthand the challenges transgendered people endured nearly a century ago and still experience today—brutal physical examinations, homophobic violence, specialists who prescribe primitive medical experiments like penis radiation and drill holes into the brain to cure what they erroneously diagnose as schizophrenia. Einar loves Gerda, but the only way he feels fulfilled is to live with her as Lili. At a time when sexual reassignment surgery was unheard of, Gerda stuck by Einar all the way, remaining by his side when at last he found a doctor in Dresden willing to perform a series of operations that were more dangerous and highly experimental than they are today. The outcome is a failure, but for one brief shining chapter in the life of a doppelganger in disguise, Einar became Lili at last and in the end, there was contentment in her smile.

Regardless of how you feel about the subject matter, The Danish Girl is an overwhelming act of heroism for Eddie Redmayne. His fine features have always accented an androgyny that is part of his charm. Now he shows an intense compassion for the daunting psychology of gender transition that results in what looks like uncanny freedom on the screen. His body language in scene after scene, measure for measure, is in a class by itself. Tom Hooper, who reunites with his star after they worked together on Les Misérables, is the perfect director to find his pulse and guide him bravely to further glory in a difficult and demanding tour de force. Linda Hunt, William Hurt, Gwyneth Paltrow and Hilary Swank all won Oscars for playing gender benders on film. History could repeat itself with Eddie Redmayne. In my opinion, it is the performance of the year. 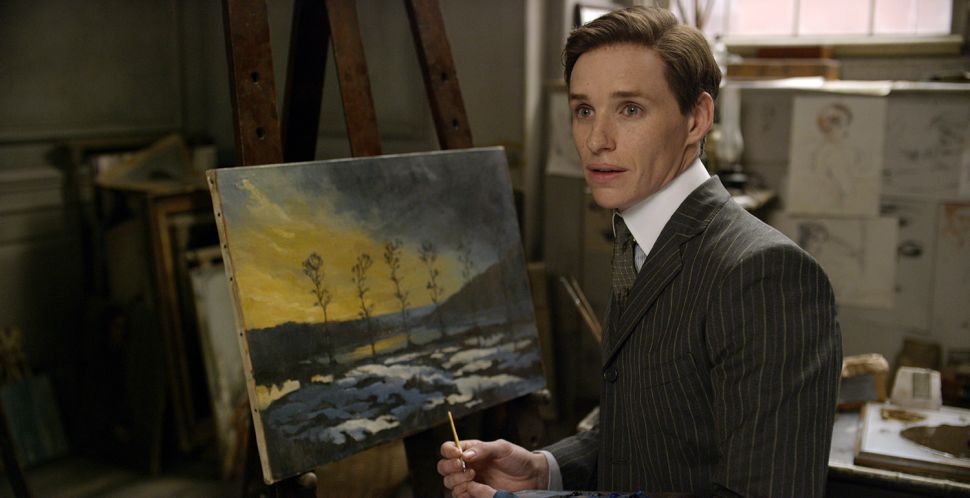