Piling on the City Council once again, Police Commissioner Bill Bratton lashed out at progressives in the body who are pushing for more oversight of the department, accusing the unnamed pols of being “obstructive” and “destructive.”

Mr. Bratton, speaking at a Citizens Budget Commission breakfast in Midtown this morning, said he had to wrangle with a “novice” Council with many members who never worked in the private sector, and implied their lack of experience was the reason they were advocating for a series of police reform bills he despises.

“The City Council … depending on the day of the week is supportive and helpful or obstructive and destructive,” Mr. Bratton said. “The vast majority of these bills I feel are unnecessary, intrusive and self-serving on the part of the particular members of the Council.”

Telling the small group assembled in the Harvard Club that he prefers a collaborative approach to new legislation, Mr. Bratton implied some lawmakers in the 51-member body lacked the experience to deal with issues related to policing. At the beginning of Mayor Bill de Blasio’s tenure in 2014, Mr. Bratton confronted a “novice City Council, most of the City Council members were new to their position, most of them had never worked in the private sector.”

Rather, Mr. Bratton said the council members had served in “political capacities and had significant lack of experience in the part of many of them.”

Two pieces of legislation, a bill to make police chokeholds illegal and a pair of bills known as the Right to Know Act, have galled Mr. Bratton most. The chokehold bill, advanced after Eric Garner, a Staten Island black man, died in an apparent police chokehold last year, would make criminal an act that the NYPD already forbids internally, though progressives in the Council believe police enforcement is not enough to ensure more chokeholds aren’t used.

The Right Know Act would compel police officers to identify themselves to those they stop by name, rank and command, as well as require them to ask permission before conducting some searches. Mayor Bill de Blasio has backed up Mr. Bratton in opposing all of the bills.

Following his CBC address, Mr. Bratton told the Observer his message for the Council: Enough is enough.

“I made it quite clear that I think some of the legislation they are proposing is not necessary, some of it doesn’t need to be made into law,” he said, arguing the NYPD is getting “very good reviews” from the new Inspector General and Civilian Complaint Review Board. “So why keep up this pressure on the department? For what purpose? It reaches a limit where it’s not necessary, it’s not needed, it engenders extraordinary negative reactions on the part of our cops and on the part of our unions and on the part of police leadership so at some point in time enough is enough.”

Mr. Bratton said he runs a “well-regulated” and “controlled” NYPD. “I don’t need a lot of what the Council is proposing,” he said.

Council progressives immediately condemned Mr. Bratton’s comments in interviews with the Observer. Most irksome for the lawmakers is how Mr. Bratton seemed to disregard their concerted, multi-year push to hire 1,000 new police officers, a successful effort that resulted in about 1,300 additional police, including new counterterrorism officers deployed yesterday. Mr. Bratton initially rejected the idea before embracing it fully earlier this year.

Eric Koch, a spokesman for Council Speaker Melissa Mark-Viverito, underscored all of the initiatives the Council has promoted to bolster the NYPD.

Councilman Rory Lancman, a Queens Democrat and sponsor of the chokehold bill, took on Mr. Bratton directly. “Commissioner Bratton can’t have his cake and eat it too,” he said. “He can’t accept the Council’s support for some of his most important initiatives without also responsibly engaging on other issues that our constituents care deeply when it comes to police reform.”

Councilman Ritchie Torres, a Bronx Democrat, called Mr. Bratton an “arrogant, imperious commissioner who plays by his own set of rules, feels accountable to no one but himself, and drips with disdain for democratic law-making.”

“He can say and do whatever he wants,” Mr. Torres said. “That seems like it’s an accepted fact of political life here in New York City.” 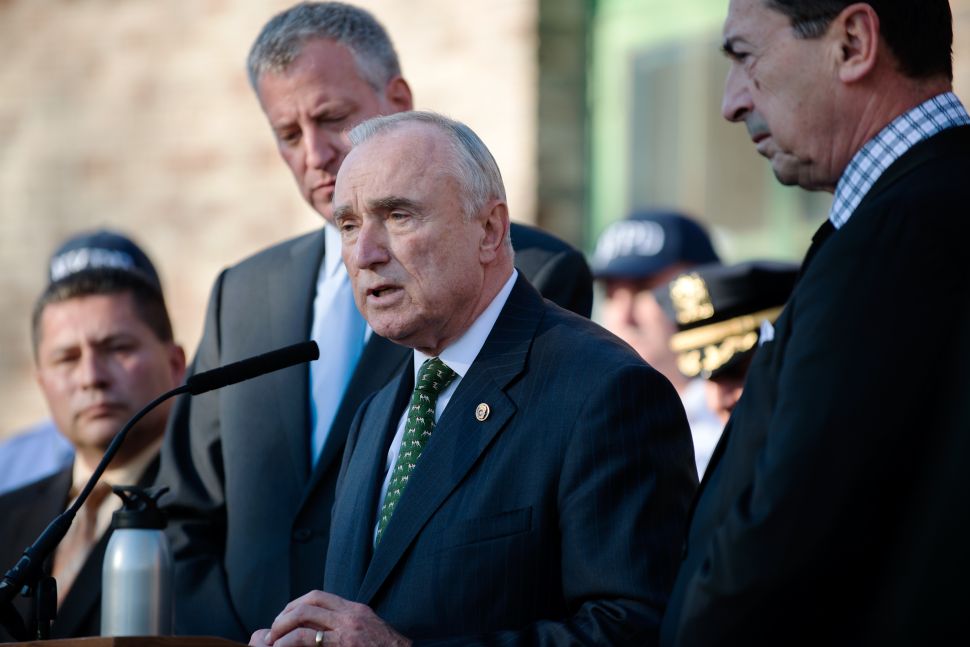