It’s been nearly a week since I first watched last night’s Fargo. Like I’ve said, I rush to watch each new advance-screener episode the moment the network sends them to me, like a kid running headlong to unwrap the biggest present under the tree on Christmas morning. A lot has stuck with me since then: the opening massacre montage set to Jethro Tull’s “Locomotive Breath” (window washers!); Floyd Gerhardt’s smile in the interrogation room when she realizes she’s used the cops to win her war; the use of a ‘70s-style cover of “Just Dropped In (To See What Condition My Condition Was In),” a Big Lebowski soundtrack standout; the Undertaker; the appearance of the title in the cold air above the Gerhardt farmstead. You could easily list two or three times as many memorable moments without breaking a sweat.

But I’ll tell you the bit that got to me the most. It’s a line from Simone Gerhardt, the ill-fated double-agent heiress to the empire. Barely surviving her confrontation with Mike Milligan over the hit on her grandma’s home (which took out Grandpa Otto, not her hated father Dodd), she’s escorted out by Ben Schmidt, one of Fargo’s Finest. He falls for her blunt come-ons like the supporting-character dupe he is, then gets kneed in the balls for it so that she can effect her escape. “If I’m goin’ to the noose,” she tells him, “I’m goin’. But I’m done lyin’ down for men.”

Then she walks out to the parking lot, where she is waylaid by her uncle Bear, who drives her out to the middle of nowhere, marches her deep into the woods, and kills her for sleeping with the enemy while she begs for her life. She was done lying down for men, yes. She was not done kneeling for them.

“Did You Do This? No, You Did It!”, the seventh and finest episode in Fargo magnificent second season, strips away the layer of civilization, progress, humanity that its characters wrap around them like winter coats against the chill. It does this with violence—extravagant gangland violence in the Scorsese/Sopranos vein. Simone’s situation is the most obvious example. Though in many ways she was just as naive and reckless as her many detractors said, much of this stemmed from the near-constant dismissal of her worth as a human being by virtue of her gender. Abused and ridiculed by her father, who pushed her out of the family business as much as he could, she weaponized her body, the one thing she could still control, on explicitly feminist grounds. She used it to get into Mike Milligan’s good graces, in hopes he’d take out her tormenter. Instead she came within a hair’s breadth of being killed by him to take revenge against Floyd, again simply because she’s female: “The first-born granddaughter—well, she’s always the shine on the apple.”

When death finally comes, at her uncle’s wounded hands, it comes for her womanhood too. Bear tells her of the fate that awaited women who slept with German soldiers in France during World War II: After the country’s liberation, their countrymen shaved their heads and drove them out of town in disgrace. But the penalty he has in mind for her is even harsher, so much so that she begs for humiliation and banishment instead. He’s devastated afterwards, smashes the cast right off his arm against the hood of his truck as “Danny Boy” plays on the soundtrack. He, of course, is still alive.

For Mike Milligan, the reservoir of racism in which he’s no doubt been treading his entire criminal career finally overflows, the dam shattered by his failure to break the Gerhardts. “Braverman stood for you!” the boss of Kansas City barks at him over the phone, referring to one of the management-level gangsters taken down by Bear’s daring window-washer raid. “Said ‘He’s not like the other darkies. This one’s smart, capable.’ But that is not what I’m seeing.” “I appreciate the opportunity, sir,” Mike replies, “Believing as I do, like the good Dr. King said, ‘A man should be judged on the content of his character, not the color of his skin.’” “Yeah, he’s dead,” the boss says. “You’re gonna need a different quote.” Mike’s got plenty of those, that’s for sure—he’s a walking Bartlett’s Familiar Quotations—but when it comes to the showdown with the Undertaker, he’s just “This eggplant that can’t stop shittin’ the bed.” Mike and the surviving Kitchen Brother win that fight, for all the good it’ll do him.

And it’s not just the criminals whose illusions shatter. Throughout the season, Hank Larsson has been the definition of a stand-up guy: a wonderful father, doting grandpa, ideal father-in-law, brave cop, all-around decent human being. His time in the War hardened him, but it also softened him, made him more empathetic. It did not seem to break him. This war may be different, at least for those close to him. With he and his son-in-law Lou out fighting crime all the time, it falls to his daughter Betsy to go to his house and take care of his cat. There she opens a door and finds a chamber of horrors—a room filled floor-to-ceiling with the seemingly schizophrenic scribblings of an obsessed UFOlogist. Put aside the fact that for the purposes of Fargo, unidentified flying objects are very real. (Hank doesn’t know that for sure at any rate.) What Betsy sees is her father as an old man who sits at home, locked in a room, poring over books full of nonsense, deciphering a nonexistent alien alphabet, slowly losing his mind. The man of steel she always saw is gone, never to be rebuilt, the comfort and safety and wisdom he provided never to return. They were never really there at all. 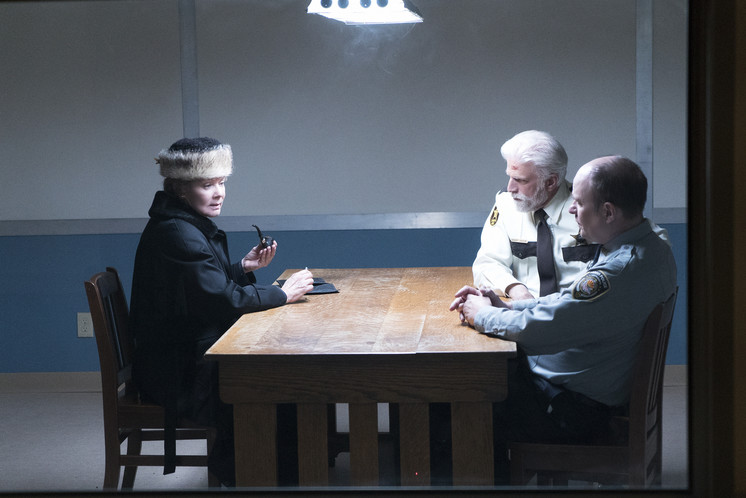 Filed Under: TV, TV, recap, Fargo, Coen Brothers, Patrick Wilson, Jean Smart, Did You Do This? No