Let’s talk about war. We might as well; this week, everybody’s doing it. Two speeches about war bookend “Rhinoceros,” last night’s extraordinary episode of Fargo. One of them closes the hour, intercut with the laid-back ‘70s-rock cover of “Man of Constant Sorrow”—which as performed in O Brother, Where Art Thou? is an entry in the Coen Brothers highlight reel if ever there was one—that runs during the closing credits. Here, Karl Weathers, the blustery “barrister” played with gasbag gravitas by Nick Offerman, offers an encomium to its unique way of uniting individuals in a common experience. “I’m talking about the camaraderie of men, kid,” he tells Sonny, his auto-mechanic sidekick. “That hard-to-define male bond. Born in the age of the neanderthal, when men still hunted mastodon with flint and spears. I’m saying you find that in wartime, that foxhole brotherhood. Then, when you come back—well, there’s no civilian equivalent, not in peacetime.”

A Korean War veteran, Karl has clearly been a barstool philosopher for years, and his pronouncements about man’s eternal struggle are no doubt as familiar a fixture in this VFW hall as the American flag. But there’s a difference this time: Earlier that evening, he engaged in that struggle with a gang of armed killers. When Bear Gerhardt and his crew came to the Rock County Sheriff’s Station to liberate his son Charlie and execute his brother Rye’s killer Ed Blomquist, Karl served as law and order’s last line of defense. Tapped by Lou Solverson—the cop and Vietnam vet he’d been drunkenly decrying as an agent of the state’s overweening authority just a few minutes earlier—to stave off a full-scale battle, he talked Bear down with a clear-eyed assessment of Charlie’s grim legal prospects should the joint jailbreak/lynching proceed. Only after the kid’s dad contemplated sentencing his son to either life on the lam or life in prison and signaled a retreat did Karl finally let the fear he’d covered up during the negotiation show. “I stared down Chiang Kai-Shek,” he’d cited to Lou earlier as one of his credentials for the task; he may have his Chinese warlords mixed up, but whatever he saw in those eyes served him well.

The other speech about war comes near to the beginning of the episode, just after the title of the show appears on screen. Its audience is no less captive than the boys at the VFW, though the reaction is harder to gauge—an audience of one, Otto Gerhardt, the stroke-debilitated patriarch of the Gerhardt crime family. This speech comes from Bear Gerhardt himself, whose scruffy, scraggly, restrained portrayal by Angus Sampson is a world apart from the lockjaw gangster swagger of his martinet older brother, Jeffrey Donovan’s Dodd. “I was thinking about Elron the other day,” he tells his old man, referring to the eldest of the Gerhardt brood. “Before? His face, you know? Trying to remember. I was ten when they came. Soldiers in uniform with a folded-up flag. You were in Chicago, I think. Mom says. There’s that picture in the hall of you and all the kids, that winter in Bear Lake. Everyone else in coats, but Elron’s in a t-shirt, making muscles. What would he do, now, you know? Now with, uh, with this. ‘Cause he was the oldest, right? Not Dodd.” Speak of the devil and he appears: Dodd then pulls up and puts an end to Bear’s reverie. Until that moment, though, Bear’s painted a picture of a cute, courageous young cut-up, cut down before his time, kept from reaching the time when his family would need him most. War reduced Elron to symbols of himself—the flag that draped his casket, a photograph from happier days—and put in his place a grinning thug who abuses his daughter and brother with impunity. Whatever menace Elron’s sacrifice was meant to stop, that sacrifice unleashed a different menace here at home.

And the war that took him was the same war that first showed Karl Weathers the bond that kept him from breaking later that night. The war that gave Lou Solverson the courage to protect Ed Blomquist at great risk to himself was the same war that fueled the misanthropy of Hanzee Dent, the man sent to kill him. World War Two helped make Hank Larsson a stand-up guy willing to face down Dodd and his gang alone; World War One helped Dodd’s grandfather Deiter start that gang in the first place. War is Mike Milligan’s vision of a beamish boy slaying the fearsome Jabberwock with his vorpal blade, recited on the way to massacre a house full of unarmed women and old men. It’s Ed Blomquist recounting the myth of Sisyphus and interpreting its tale of meaningless suffering and struggle as a paean to fighting for what’s yours. And no matter how many times that back-crushing boulder rolls down, some motherfuckers are always gonna push it back into place. 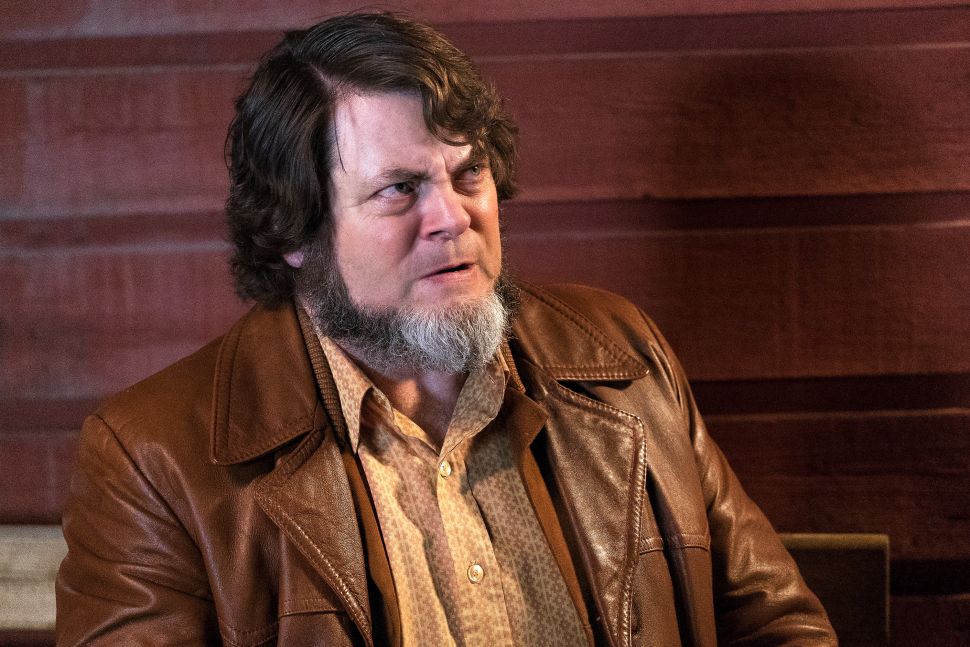