“The American dream is so compelling, is it not?”

That’s a line that’s so on the nose that it would be cringe worthy, if it weren’t so absolutely true in most instances.

That line is voiced during the new Starz series Flesh and Bone, a limited run offering that tells the tale of a wannabe ballerina searching for her American dream, and yes, along the way, there is sex, drugs, anorexia, money issues and even some human trafficking.

The story begins when young waif Claire quickly lands a position within a fictional but clearly prestigious ballet Company, but struggles to find her true place within the large conglomerate of human neediness. At every turn she is simultaneously praised and belittled. Throughout the series, everyone in the company struggles under the weight of preparing for the upcoming dance season, and in particular, the performance of an entirely new piece that will star Claire.

It’s been hotly debated lately among creators and audience members alike that there is simply too much television content for consumption these days. Those that are happy with the situation say that the prevalence of new unique material means that there is something for everyone. One can’t help but feel that it’s only due to this continual massive need for original content that this series even exists. In a world with limited outlets Flesh and Bone surely would never been made, for main concept of the material seems a bit too narrow for the average viewer.

But having said that, while the original distinctive selling point may have been that that series is set in the oft mysterious world of ballet, the truth is that that’s really just the backdrop to tell stories about some seriously fucked up people doing a lot of seriously fucked up things. For comparison sake, much like Friday Night Lights was only peripherally about football, this is only really peripherally about ballet.

In fact, when one character utters to another (in a funky accent) “You’re enemy of yourself” in an episode midway through the series, you might want to scream, “yes!,” realizing that’s exactly how to describe virtually every single character in this series and that this seems to be the real foundation for this narrative, rather than the struggle to reach a certain career pinnacle.

This is assuming that you even make it that far into the narrative. Sadly, there’s a lot to keep you from getting there. As you take in the muted colors surrounding the sweaty dancers as they continually work in a dingy practice facility, listening to them constantly endure extremely harsh criticism time and again, you might find yourself wondering why anyone in their right mind would choose this path. In coming to that conclusion you might also wonder why you should spend your precious time watching people suffer through such a dismal situation of their own making. It’s not pretty and if percentages were given, it would be safe to say that nearly 95% of the scenes in Flesh and Bone are just downright uncomfortable to watch. Everyone is self-absorbed and yet so extremely fragile at the same time that should you tune in odds are that you’ll spend much of your time wondering just when each one of these people will break and what will ultimately bring them  down. What unfolds over the eight episodes is a narrative that is certainly not told with any urgency and the lack of movement (sort of ironic in a series that features one of the greatest forms of movement) can be awfully trying on the viewer.

To be fair, there are some beautiful dance sequences with graceful moves that are gloriously lit, complete with soaring music, but on the whole, Flesh and Bone tries oh so hard to be dark and moody and brooding that it overloads on those elements. Just once, it would be great to see someone in this series smile. Life is hard but there are small victories along the way, and to see that would give the series a much needed infusion of reality.

The pursuit of the American dream, in various incarnations, will continue to be used as the foundation for series upon series, as it should be. Normally, whether or not the goal of the protagonist is achieved, the journey is usually worth the time. Unfortunately in the case of Flesh and Bone, there just isn’t enough growth in any of the characters to make this a worthwhile trip.

Flesh and Bone premieres Sunday, November 8th at 8/7c on Starz (the full season will also be available On Demand and on Starz Play starting this day) 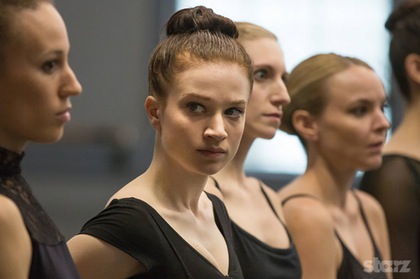