Let us consider the baby Jesus.

His life, which shall make the epoch shudder with love and war and which will make Him the most famous son of Adam, is only days old.

His simple cradle, constructed with grace and skill out of olivewood that expands gently with the daytime heat and contracts, with no threat of shattering, in the chilly desert night, lies absolutely still. The carpenter and his wife are asleep, lying an arm’s length away from the child. Every now and then, the cradle, built and balanced with a technique taught to the carpenter by a friendly Roman soldier whose name has been swallowed by history, stirs most gently as the savior inside shifts happily in his dreamless sleep. Once, when a nearby ass, shivering in its sleep, suddenly moves it’s palm-trunk of a neck, the little angel’s eyes flutter behind their nearly transparent lids, but they do not open.

The slash of His circumcision, that peculiar and bold badge of His religion that so many painters and sculptors in the future will hide behind a loincloth so as to disguise the proud creed He was born into, is still raw, but no pain disturbs His slumber.

The days-old Savior is covered with a fine, downy and virtually colorless layer of hair; a remnant of the time he was sealed in the womb, it will disappear in a few days. And when this exquisite and rare platinum fleece finally falls from His golden flesh, the morning’s first bluebird will take a tiny bit of the remarkable wool away to build a most spectacular nest, a nest that deserves a chapter all it’s own. Curiously, this somewhat rare condition (17 centuries later, a monk with a clubbed foot, working by oil-light in low-ceilinged cell by briny Frankfurt’s River Main, will name it Languo), was also present, 658 years before this crystal-crisp desert night, on the newborn Siddhārtha Gautama.

There are hours to go before the first sprays of morning, pink and milky opal, will scratch the Eastern Sky and cause the first shimmers of wakefulness within His cradle.

Of course I know the freaking City of Paris wasn’t going to let U2 play some giant arena show right after last week’s attacks.

So, for the love of the sleeping baby Jesus, of course I know the freaking City of Paris wasn’t going to let U2 play some giant arena show right after last week’s attacks.

I was merely saying in the days after this OBSCENITY of an attack, U-fucking-2 could have fucking TRIED to show up at a club, or even grabbed a couple of fucking acoustic guitars, tuned them up and busked in the street. NEVER was their much-hyped message of co-fucking-existence better matched to a moment, and for the LOVE OF RAY DAVIES how HARD would it have been to show up and open for Stiff Little Fingers? Because that would have been PERFECT, because Stiff Little Finger’s are U2’s U2.

Let us consider a late autumn day, almost exactly 35 years ago. The date is December 6, 1980. Although I am only 18, I have been working avidly as a music journalist for over two years.

On this day, I went to the Gramercy Park Hotel, which was then a reasonably clean but ragged-at-the-edges inn that housed visiting British bands (but only those with enough label support to keep them out of the Times Square and Madison Square semi-S.R.O’s where British bands usually stayed). I was there to interview U2, who were in New York for the very first time. In fact, I would be interviewing them twice: once for Trouser Press magazine and once for WNYU. 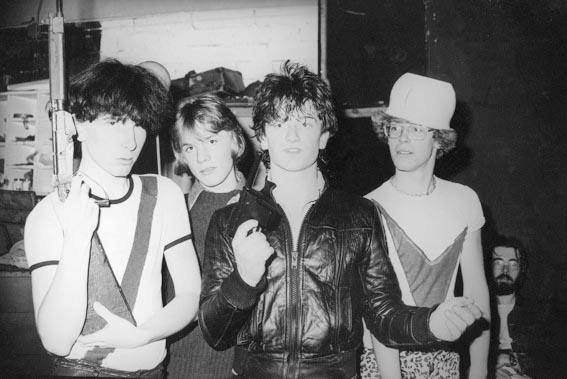 A young man, barely a year older than me, with a fantastic puff of ebon hair extends both his hands, greeting me like an old and treasured friend. His name is Bono, and this is his first day ever in New York City.

In the early afternoon daylight—the sky is high, bright and white-ish blue, what my old friend Tom Carolan used to call a “College Football Sky”—Bono tells me a rushed jumble of a story about arriving in New York City late the night before. Excited at having landed in a place he had heretofore only known in books, films and black-and-white newsprint pictures of the Ramones, he had headed out to explore. “I walked around in Greenwich Village, I mean I had been hearing about the Village my whole life,” Bono explained, grinning. “So I wandered into a pub. It was absolutely packed. I looked around and realized there was nothing but blokes in there! I had never been in a place like that in my life.”

I love and respect U2, and a long time ago in a Gramercy Park far away, they played a concert just for me (and my friend Mike).

That day I spent a lot of time with Bono and the Edge, as we did two completely separate, detailed interviews. For the second interview of the day I was joined by my cohort at WNYU, Mike “Pablo” Dugan, who was charged with running the tape recorder. As we were saying goodbye in the hotel lobby, Bono said, “The Edge went to 48th Street this morning, and bought us some new acoustic guitars. We haven’t tried them out yet. Do you guys want to come to the room and hear a few songs?”

We had probably already missed our classes for the day, so we eagerly said yes. We followed Bono into the elevator, and ventured up to the room that he and the Edge shared.

The Edge and Bono sat down on their respective beds, facing each other, each cradling their new guitars. Mike and I found spots on the floor; I put my back against the wall, wedging myself between a radiator and a TV. I distinctly recall thinking to myself, “You better remember this really clearly, in case they become the biggest band in the world, because if that happens, in the future this will make for one hell of a story.”

‘You better remember this really clearly, in case they become the biggest band in the world, because if that happens, in the future this will make for one hell of a story.’

Alas, I don’t remember a single song that U2 played during the four-song concert they performed in their hotel room for two NYU students. I do recall that none of the songs were on the (very) recently released Boy, and for some reason I remember that one of them had some lyrics about wheels on a bus, or something like that.

Although that strange blurt of a phrase is generally associated with the friction and tension of bands like Joy Division, Gang of Four, PiL and Delta 5, it also applies to an inventive group of musicians who were, circa 1979/80, trying to do nothing less than create a new vocabulary for hard rock.

Raised on Ronson, Ralphs, Iommi, Blackmore, Bolan and Page but fiercely indoctrinated by the Ramones, Saints and Sex Pistols, at the dawn of the 1980s a small handful of acts were attempting to blend the dynamics of classic rock with the taut compositions and chordal minimalism of punk rock.

The best of this very small clique were the Skids, the Ruts, Generation X and U2. Each was employing old-school guitar dynamics in new-school settings, recording skipping, twisting, riffing, dynamic rock’n’roll in which the electric guitar did very engaging and adroit things.

The Skids played soaring, anthemic Celtic-accented rock, with guitars ringing, singing and echoing like bagpipes in a canyon, over martial rhythms and chunky, chugging bass; the Ruts utilized heavy-chunka-chunka palm-muted riffing punctuated by bursts of Purple-ish slurring, often over a fleet, dexterous double-timed lovers-dub rhythm; and Generation X (and I am speaking specifically of the band as they sound on their magnificent, majestic, deeply under-valued masterpiece of a second album,Valley of the Dolls) used bright, brittle riffs that alternated between Who-ish slashes and sly Mott/Bowie Ronson-esque arpeggios, accompanying deeply affecting, Ian Hunter-ish confessional songs about sex and life in the city.

God fucking bless U2 for being the band who persevered, who took classic rock out of the elephantine 1970s and gave it to the future.

U2’s echoing, almost chaste crystal-clear clanging owed a great deal both to Keith Levene of PiL and Stuart Adamson of the Skids, though the Edge added a sluicing, take a few steps up-the-stairs/take a few steps down-the-stairs compositional style that seemed to combine Deep Purple and King Crimson and which, when married to Bono’s deeply compelling arena tenor, virtually insisted that U2 were going to be inventing a new kind of classic rock.

Unfortunately, with the exception of U2, the inventions of this pioneering and deeply listenable group of artists were largely a blind alley. The Skids defenestrated in 1981 (guitarist Adamson left and created the effective, emotive wide-screen pomp of Big Country); Malcolm Owen of the Ruts died in mid-1980, halting the forward progression of one of the most exciting bands of the era (and whose charging, turn-on-a-dime deft-metal is echoed in both Metallica and Fugazi); and with the commercial failure of the remarkable Valley of the Dolls, Generation X split into two (the spacious, ambitious Gen X and the desperately amazing neo-emo riff’n’sob band, Empire).

The integration of classic rock and punk rock was left to ass-clowns like the Cult (who merely overlaid old-school Marshall-isms onto new haircuts and discarded U2 bass riffs), and, more positively, to hysterical geniuses like Hanoi Rocks (who created a Saturday Morning Cartoon interpretation of the Dolls and morphed it with a Carnival Cruise version of the Stooges) . With the exception of U2, the amazing new-model hard rock that was emerging in 1979 and 1980 never spread its wings.

But God fucking bless U2 for being the band who persevered, who took classic rock out of the elephantine 1970s and gave it to the future.

So fuck you. I love and respect U2, and a long time ago in a Gramercy Park far away, they played a concert just for me (and my friend Mike).

They just should have fucking opened for Stiff Little Fingers. 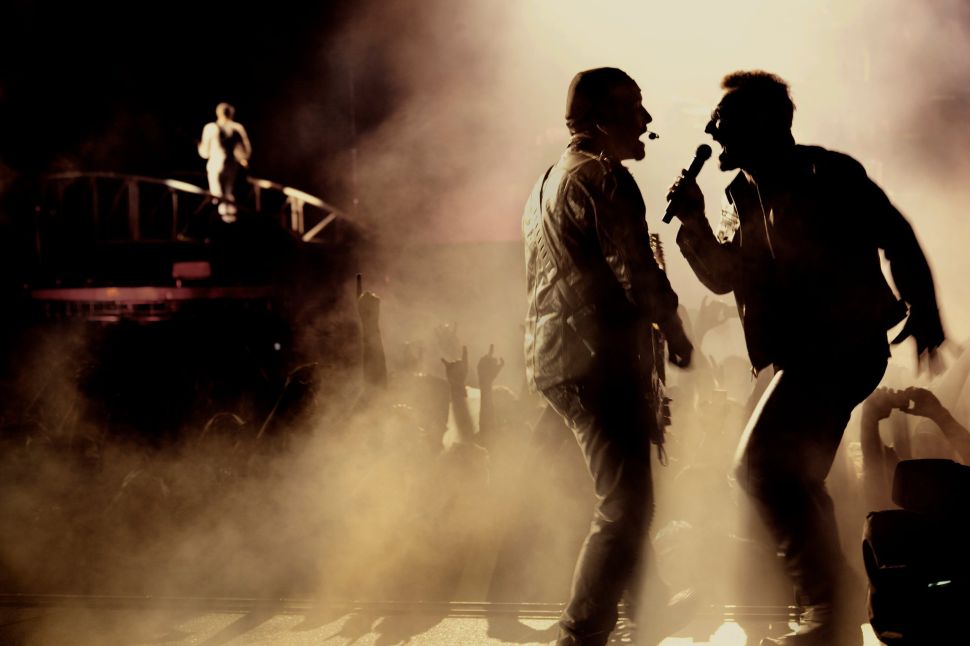