Please Note: Discussing the history of Fleetwood Mac is complicated business. You may want to have a dry erase board handy, along with a calculator and a compass (both the directional kind and the kind you put a little shorty pencil into and draw arcs with). I also suggest setting aside some money so you can go to Carvel later, to reward yourself for your patience and attention.

Fleetwood Mac had already been through three distinct ideations before Lindsey Buckingham and Stevie Nicks joined the band in 1975 (from 1967 until today, the only constants in the group are drummer Mick Fleetwood and bassist John McVie). To people who only know the Rumours-era Mac, discovering the pre-Nickingham band is a bit like finding out your dad had kids with another woman before you were born, and these kids are really good looking and talented.[i]

Danny Kirwan is one of the great lost figures in rock history (both literally and figuratively).

The original Mac (Fleetwood, McVie, and vocalist/guitarist Peter Green, with the very early addition of Jeremy Spencer on guitar and voice) played vigorous, tight, incendiary Chicago and Delta blues, showcasing Peter Green, the best white blues guitarist who ever lived. The vastly inferior Eric Clapton is barely fit to clean Green’s fish tanks with his tongue.[ii] On top of that, Green, with his clear and unaffected baritone, is (after Stevie) the most distinctive vocalist the Mac ever had.

In 1968, 18-year-old guitarist and vocalist Danny Kirwan joined the band. This five-piece Mac (who existed for just two years) are the Beatles of the blues, fronted by three distinct characters, each of which were capable of singular magic. Green provided his mix of lightning-fast, moonshine-clear solos and proto-metal riffs (as evidenced on “Oh Well” or “Green Manalishi”);[iii] Jeremy Spencer, an elfin devotee of amphetamine rockabilly whose persona seems to presage Dr. Feelgood, the Sensational Alex Harvey Band, and Slade, added Elmore James-esque slide and frantic Jerry Lee Lewis vocals; and Kirwan is the sensitive youngest brother/George Harrison of the ensemble, contributing work of devastating originality and heart.

This lineup recorded (just) one studio album, but is best showcased on the live recordings made at the Boston Tea Party in February of 1970, shortly before Green left the band. Although these showcase Green’s stellar blend of economy and ferocity, the real scene-stealer on these recordings are Jeremy Spencer’s ecstatic rockabilly covers. These oldies combust a Velvets-like overdrive while also strongly resembling the head-bang-a-billy of the early Flaming Groovies, and they are goddamn hot.[iv]

But I’m actually here to talk about Danny Kirwan.

Not only is Kirwan one of the great lost figures in rock history (both literally and figuratively), but he is also the person who midwives the transition from the Blues Mac of the 1960s to the mega-selling FM pop machine of the mid-1970s.

It’s perpetually late on a wet autumn afternoon in Danny Kirwan’s world. Couples are buzzing around, clutching each other’s arms and surprised—almost thrilled—by the sudden chill; students pop in and out of coffee shops, spouting wise asides about film and poetry and optimistic about the casually tossed scarf’d future that lies ahead of them. One young man, almost too pretty but with lips pearl’d in perpetual sadness and skepticism, sits on a bench taking it all in, smoking endless cigarettes and running nicotine-stained fingers through his mop of blonde hair. He is half-smiling because he’s just conjured a gorgeous melody that is somehow both as bright as their future and as dark as his own.

Kirwan’s work in Fleetwood Mac has an almost Peter Holsapple-esque quality (though I could also cite the Bongos, R.E.M., Big Star and Robyn Hitchcock); it’s feather-gentle, darkly foreboding, arpeggio-laden pop with a shadow of the old Blues Mac hanging around.

Although his best work was yet to come, Kirwan had contributed significantly to the Green-era Mac.

His deeply sensitive spirit and hushed soloing hovers over the almost historically gorgeous “Albatross,” [v] and Then Play On (the only true studio album from the Green/Spencer/Kirwan Mac), which contains Kirwan’s “When You Say,” a positively Robert Wyatt-ish song of child-like simplicity and deep sentiment. Christine McVie also cut “When You Say” in 1970 on her fascinating Christine Perfect album; her version, produced by Kirwan, is extraordinary, far more reminiscent of the string-driven autumn simplicity of Nico’s Chelsea Girl than anything the Mac (in any configuration) ever recorded. Find this recording, and stick it on your Fleetwood Mac mixtape, in a place of honor.

Although Fleetwood Mac’s first Green-less album, Kiln House (1970), is a relatively unsatisfying transitional album (the group is, unknowingly, searching for a bridge between the old blues Mac and the more melodically-driven band to come), it features Kirwan’s gentle, persuasive, almost Harrison-esque instrumental “Earl Grey,” which sounds like a slightly wet R.E.M. trying to play Cream’s “Badge” (that’s a compliment).

Future Games (1971) and 1972’s Bare Trees are where Kirwan really blooms. Spencer left the Mac in ’71, leaving Kirwan, an increasingly confident McVie, and newcomer Bob Welch to guide the band. Kirwan’s material on Future Games, typified by “Woman of A Thousand Years,” features delicate wisps of melody and firm but whispered guitar work that seems to have one foot in English folk and another in the Mac’s sunny but moody mega-pop future.

Bare Trees (1972) is the Kirwan-era Mac masterpiece, and it is very likely the best and most engaging Fleetwood Mac album not named Rumours. Bizarrely, it is not available on any of the streaming or download services, so do everything you can to get it. It is a treasure. Bare Trees contains five Kirwan songs, three of which I’ll underline here: “Sunny Side of Heaven” is a bittersweet, richly melodic instrumental that has a third Velvet Underground album-meets-Durutti Column quality; it’s without a doubt one of the 10 best Mac songs ever recorded. “Danny’s Chant,” one of the most interesting tracks on Bare Trees (even if it’s not one of the best), is nothing less than the Beta-Version of “Tusk.” Featuring a tribal Fleetwood beat and some chanted vocals, it’s difficult to imagine that Mac weren’t aware of it when they recorded the more famous song six years later.

Danny Kirwan was fired from Fleetwood Mac in the fall of 1972. His alcoholism and increasing mental instability had made him a difficult bandmate and collaborator.

Kirwan’s final song on Bare Trees, “Dust,” lies somewhere between Richard Thompson and Neil Young, and has a beach-in-winter, sepia-toned quality to it. It’s deeply beautiful and deeply sad, and like many of Kirwan’s best songs, it is compact in structure and length but expansive in emotion.

Danny Kirwan was fired from Fleetwood Mac in the fall of 1972. His alcoholism and increasing mental instability had made him a difficult bandmate and collaborator.[vi]

After leaving the group, Kirwan appears to have had some difficulty getting a solo career off the ground. He finally emerged with the first of his three solo albums in 1975.

The first two (1975’s Second Chapter and ‘76’s Midnight In San Juan) are a little too precious—it sounds like Kirwan was listening to a lot of McCartney and Nilsson—and lack the extraordinary vulnerability of his Mac work. There are some highlights (like the first album’s title cut, or the lilting “Angels Delight” from Midnight in San Juan), but these are non-essential albums from an essential artist. And the less said about his final solo album, 1979’s Hello There, Big Boy!, the better; Kirwan, who participates only minimally as a writer or guitarist, sings half-hearted vocals in a notably lower range over a pile of tracks clearly modeled after the prevailing Steely Dan/Mac AOR pop of the day. It’s a terribly sad album, especially in light of what was to come.

Tragically, mysteriously, almost uniquely, that’s where Kirwan’s musical story ends. For the past 35 years, Danny Kirwan has lived behind a veil of mental illness and homelessness. He doesn’t appear to have been photographed since 1993, and some reports have him living at a hostel in London.[vii]

I need not detail the extraordinary commercial and creative heights Fleetwood Mac ascended to without Kirwan. Yet Danny Kirwan is the beautiful angel of melody and vulnerability who hovers over Mac. The spirit and sound he brought to the band—highly melodic, proto-shoegaze pop songs with a dusting of melancholy—essentially became the model for Mac’s platinum future. Kirwan is one of rock’s greatest and most powerful ghosts, and no picture of music in the 1970s—and certainly no picture of Fleetwood Mac—is complete without Bare Trees and Future Games.

[i] And that’s before we even address the band’s life after 1987—I mean, how many people out there are even aware that a Mac featuring Bekka Bramlett, Dave Mason and Billy Burnette made an album in 1995 that didn’t even dent Billboard’s Top 200 album charts?

[iv] A remarkable artifact of Jeremy Spencer’s post-rockabilly, pre-punk sensibility is the amazing “Someone’s Gonna Get Their Head Kicked In Tonight,” a slice of Joe Meek-ish insanity the Mac cut in 1968 and released under the name Earl Vince and the Valiants. The Mac (Fleetwood, McVie, Kirwan, Spencer) also cut an utterly bizarre album of rockabilly pastiches and parodies in 1970, which was released as a Jeremy Spencer solo album. This LP, titled Jeremy, is without a doubt the oddest and least known Fleetwood Mac record.

[v] “Albatross” is one of the best singles of all time. Period. If you don’t know it, listen to it now; and if sounds familiar, it’s because the Beatles ripped it off for “Sun King.”

[vi] Kirwan was replaced by Bob Weston, who sticks around for just one album, 1973’s Penguin.

[vii] It’s worth noting, with deep sadness, that three members of the ’69 Mac, i.e. all except for Fleetwood and McVie, ended up with significant social and psychological issues. Jeremy Spencer joined the controversial Children of God cult; after many years battling mental illness and occasional homelessness, Peter Green successfully returned to a more-or-less functional public life in the mid-1990s; but Kirwan’s fate remains tragic and unresolved. It is also should be noted that Bob Welch committed suicide in 2012.

***
Ork Records: The NY Punk Record Label That Was Too Good to Last 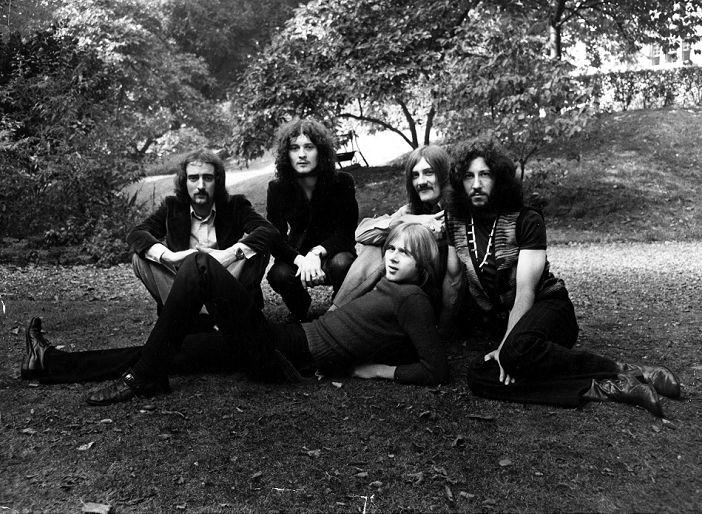