Four down, eight to go. Thanks to Fox Business’ stringent debate criteria, only eight Republican presidential candidates qualified for the Tuesday night debate in Milwaukee, Wisconsin.

New Jersey Gov. Chris Christie and former Arkansas Gov. Mike Huckabee, who had been previously included in each of the main stage debates, were relegated to the earlier undercard debate with former Pennsylvania Sen. Rick Santorum and Louisiana Gov. Bobby Jindal. South Carolina Sen. Lindsey Graham and former New York Gov. George Pataki did not poll well enough to even be included in the undercard debate.

So at least we didn’t have to sit through a two hour debate with 10 or 11 candidates speaking for just a few minutes each. The best part about that was that you never forgot any single candidate was on stage. And with that, here’s where each candidate excelled and floundered.

Where he floundered: He spoke less than he has in previous debates and was far less energetic. He also claimed North Korea has nuclear weapons. I mean, Kim Jung Un claims they do, but he’s about as reliable a source as a Youtube commenter.

His swipe at Carly Fiorina, about her interrupting people, certainly will not help him with attacks from his rivals and Democrats about his women problems.

Where he excelled: He defended every Republican on stage by noting that every one of their tax plans would be better than the current tax system. His willingness to give up some of his speaking time to defend his rivals, shows his growth as a candidate since his first debate, when he was nothing but bombastic.

Where he floundered: I’ve said it before and I’ll say it again, he is not charismatic on that debate stage. His answer about troops in the Middle East was incoherent, especially when it comes to Iraq.

Where he excelled: Voters continue to love what he says. I don’t get it. He’s doing something right that clearly I’m not getting. He did point out at one point that taking every penny from the rich won’t make a dent in the national debt. That’s a fact that doesn’t get noted as often as it should.

Where he floundered: He could have stepped in more to get more speaking time, but he came out on top each time another candidate tried to criticize him. I really can’t find anything he did poorly.

Where he excelled: He was the only candidate who properly explained the Republican opposition to a minimum-wage hike.

“If you raise the minimum wage, you’re going to make people more expensive than a machine,” Mr. Rubio said. “And that means all this automation that’s replacing jobs and people right now is only going to be accelerated.”

Where he floundered: He mentioned “sound money” but didn’t explain what that is.

Where he excelled: He brought up a fair point by suggesting people look into how other countries handle illegal immigration before condemning the Republican plans.

He also stepped up to defend military spending against Sen. Rand Paul’s criticisms, by asking: “If you think it’s expensive to fund the military, think how expensive it will be to not fund it.”

Where he floundered: He was supposed to be “feisty” and “aggressive” in this debate, but he just came off as snippy and insolent. He seemed to be trying so hard that he couldn’t form a coherent argument. When he wasn’t attempting to stand out so much, he was far calmer, perhaps more boring, but far more polished.

Where he excelled: He sounds more authoritative when he discusses education and jobs. When he talked about lower paying jobs being created while higher paying ones were lost during the recession, he sounded knowledgeable and presidential.

Where she floundered: She was more subdued this time around, not the feisty Fiorina we’re used to. She has been falling in the polls, so I don’t believe this tactic will help. The reason she was noticed in the first place was because of her quick wit and sharp answers. Now she keeps repeating her plans instead of focusing on the specific questions asked of her.

Where she excelled: She packs more information into each of her answers than any other candidate. It provides a clear indication of her knowledge of the issues, but it might also muddle her message.

Where he floundered: He tried to go after Mr. Rubio, but just as in the first debate with his tiff with Mr. Christie, he came off as petty. Mr. Rubio was able to easily deflect Mr. Paul’s criticisms of his tax plan and military spending.

Where he excelled: He flatly explained how proportionality works, since Democrats have been attacking Republican over their tax plans. When someone makes more money, they’re going to receive more money from a tax cut, even if they receive the same percentage cut as someone who makes less money. It’s really simple.

“Democrats demagogue this issue to death, and when they do they say, oh, a millionaire would get a bigger tax cut than someone making $10,000,” Mr. Paul said. “That’s proportionality, as Ben is trying to explain to folks.”

Where he floundered: He continues to poll well enough to make it into the main debates, yet he continues to sound like he is in the wrong party. He disagrees with his fellow Republicans on so many issues he seems like he should be debating Hillary Clinton and Bernie Sanders.

His answer on bank bailouts was especially troubling for a Republican audience. “When a bank is ready to go under and investors are getting ready to lose their life savings, [you have to act],” Mr. Kasich said.

Where he excelled: This won’t help him with Republican voters, but he is at least realistic when it comes to discussing illegal immigration. It’s just impossible to imagine plucking 12 million people out of their homes and transporting them out of the country. 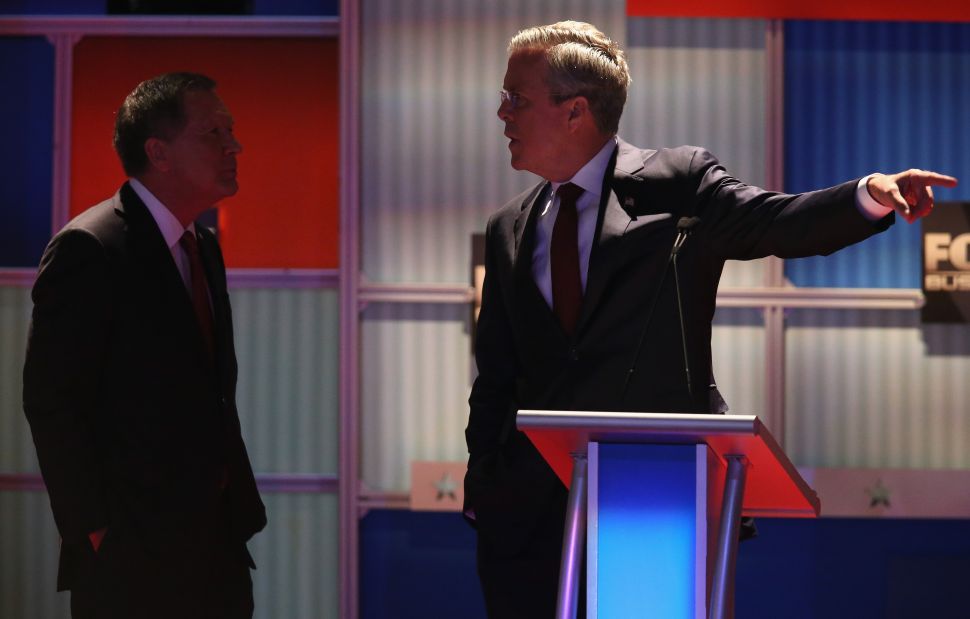