In spite of Islamic terrorists killing nearly 3000 Americans on September 11th 2001, the essential two party nature of the US political system remained the same. Fourteen years after the Twin Towers fell Republicans are still Republicans and Democrats are still Democrats. It is an open question whether the French political landscape will be the same after the Friday the 13th attacks.

The rise of the extreme nationalist, anti-immigrant ‘Front National’ (FN) which has been slowly building in France since the mid-1980s, cut the guts out of the old left/right system wherein the Socialist left and its allies including the Communists and the Greens, alternated with the Gaullists and the rest of the Center Right. In 2002, the French political establishment was shocked when Jean Marie Le Pen, head of the FN beat the Socialist candidate for second place in the French Presidential election. He was decisively defeated in the second round of voting by an alliance of the Gaullists and the left,  but the very fact that a man who’d been branded a fascist and a racist had won so many votes left the French establishment deeply shaken.

Since then the FN, which is now lead by Le Pen’s daughter Marine has tried to become more ‘respectable’, has gone from strength to strength. Yet it still has been unable to gain a foothold in France’s parliament.

Could President Hollande do anything in the next few weeks that could short circuit the rise of the far right?

Meanwhile the Socialists lead by President Francois Hollande have seen their share of votes collapse. Ex-President Sarkozy’s party, formerly called the MPR and recently renamed “Les Republicans” did well in the departmental elections, but in the total share of the vote in the first round, came in second to the FN.

The great question now is, will the attack on Paris propel the FN into power or will the government’s response to ISIL’s atrocity be strong enough to prevent French voters from flocking to Ms. Le Pen? So far the signs do not bode well for President Hollande who is trying to avoid overreacting the way many believe George W. Bush overreacted after the 2001 attacks.

I spoke with an old friend after the attack who previously hated the FN with a passion and whose family has deep roots in the anti-Nazi resistance is now considering supporting the FN. This is a major change since no one doubts that the FN has its roots in the ideology of the collaborationist Vichy Regime. He is certainly not the only one.

So far, the FN has been kept out of power by the force of a consensus by the left and right to quarantine Ms. Le Pen. If this changes as it almost did during the March elections when it was feared that right wing voters in a few departments would vote FN in the second round thus giving them power in places like the Jura region near the Swiss border, This did not happen, but come December and the regional elections (which may be postponed) the FN could triumph.

Could President Hollande do anything in the next few weeks that could short circuit the rise of the FN? He probably will order an increase in police and security forces activities on France’s borders and elsewhere, but will he find a way to ‘mercilessly’ bring France’s striking power to bear on ISIL? Will he demand a significant increase in France’s defense budget? Will he invoke Article 5 of the NATO treaty, the article that says that an attack on one will be considered an attack on all ? Will he cancel the sale of the two formerly Russia Mistral class assault ships to Egypt and instead turn them over to the French Navy? Will France become, once again, a truly important global military power? 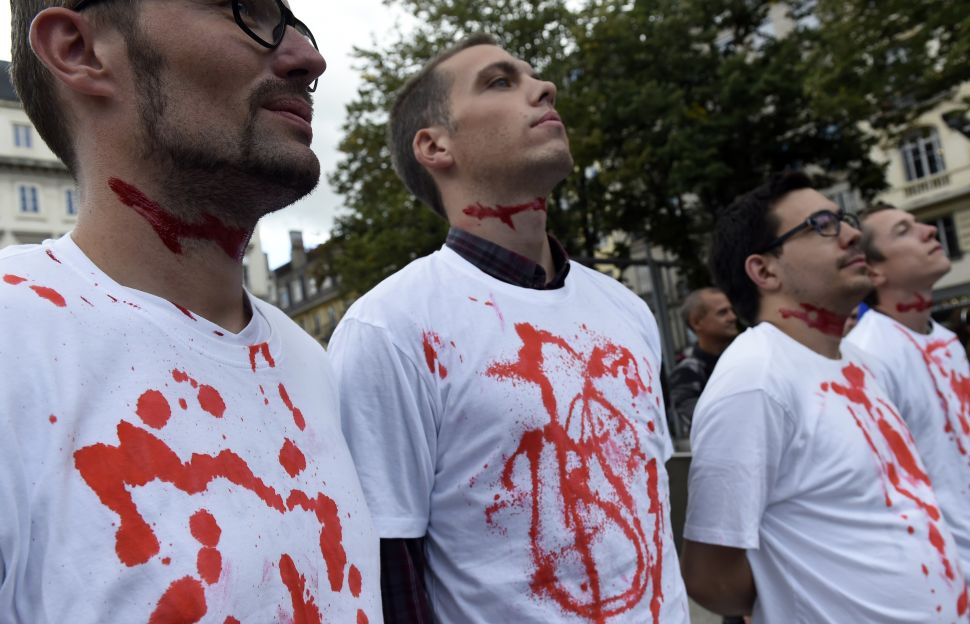