On Tuesday, the national day of action in the “Fight for Fifteen” movement, Jersey City Mayor Steven Fulop and members of the city council passed a resolution calling on the New Jersey legislature and Governor Chris Christie to bump the state minimum wage from the current $8.38 to $15 per hour.

The move was supported by New Jersey Working Families, a grassroots political organization dedicated to improving workers rights and conditions in the state. This year, one of the main missions for the group is the fight to boost the minimum wage.

“In New Jersey, a minimum-wage worker has to work more than 13 hours a day, 7 days a week just to afford the cost of living,” said Fulop at a Tuesday rally before the council meeting where the resolution was passed. “That’s wrong. We absolutely must raise the minimum wage.”

Though the resolution passes no binding action, Working Families Executive Director Analilia Mejia says that the support of a large municipality like Jersey City will help the message of a wage bump resonate with N.J. legislatures.

“The Jersey City Council just took a big stand in the fight to ensure family sustaining wages for everyone who works in New Jersey,” said Mejia. “Across the state, elected leaders are hearing and heeding the call of airport workers, child and elder care workers, fast food workers and more who demand a fair wage and a fair shot at the American Dream. The Fight for $15 has arrived in New Jersey, and we won’t stop until we win.”

The fight for 15 is not the first time that Mayor Fulop’s administration has teamed up with Working Families as part of a mission to improve working conditions in the city. Within three months of Fulop assuming office in 2013, Jersey City became the first municipality in the state to grant paid sick leave to workers. Since then, nine cities including Elizabeth and Newark have followed suit throughout the state.

In June of this year, the legislature voted on the sick leave bill (S785), partially because of the pressure that cities like Jersey City granting the leave put on the rest of the state to comply with the ordinance. The bill’s provisions do not grant sick leave blindly. It states that for every 30 hours worked and employee will accrue one hour of paid sick leave.

The bill stalled in September due to conflicts in the legislature over whether the final statewide bill should supersede the nine municipal ordinances already in place. While no vote is currently scheduled, the bill is unlikely to get the support of Governor Christie when it finally reaches his desk.

Like with sick leave, a minimum wage bump would likely face the current governor’s veto pen if it were to pass both houses. However, as Fulop seemingly angles for a gubernatorial run in 2017, aligning himself with popular working class issues like increased minimum wage and with the strength of Working Families and the union groups that support it, the mayor may be building a statewide support base. In fact, since the minimum wage bump is still in the fledgling stages—the State Department of Labor announced in September that workers will not see an increase in 2016—it is possible that the bump will avoid the issues that sick leave has faced.

As initiatives like these get piecemeal enacted throughout large municipalities like Fulop’s own, a growing precedent for these town measures will become tied to state-level bills. Now that the majority in the Assembly is even more in the Democrat’s favor, if a Democrat like Fulop were to enter office in 2017, it is likely that these efforts will receive the final ok.

Fulop is not the first New Jersey lawmaker to approve of the $15 minimum wage. On Monday, Congressman Frank Pallone (D-6) teamed with the healthcare workers union SEIU to push the initiative.

The Fight for Fifteen started in New York three years ago when fast food workers began pushing for a $15 minimum wage. Since then, it has spread to professions including retail and healthcare. Seattle, Washington currently has a $15 minimum wage, but the initiative is building strength nationwide. Tuesday was marked by nationwide walkouts and picketing from a number of minimum wage workers. 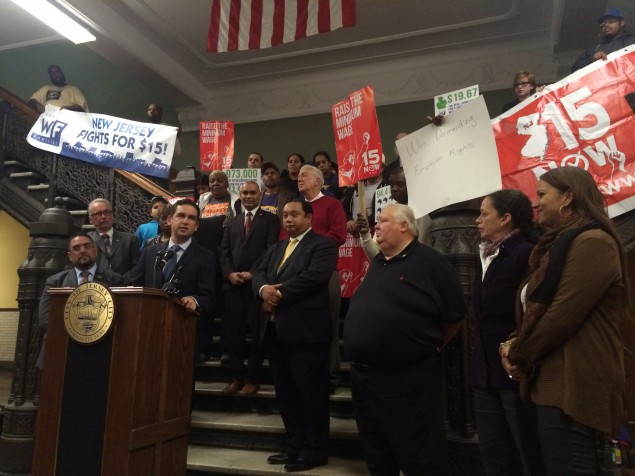