Welcome to a very, very delayed edition of the Gotham Reference Guide. I was travelling for work and trying to watch Gotham on a number of planes but unfortunately, as we all know, penguins can’t fly. And, uh, apparently neither can FOX’s streaming network. Probably because CBS owns anything above the clouds, now.

Probably not the best time to be making jokes about Oswald, anyway. Dude just watched his mother die mid-hug. (RIP Carol Kane. My Netflix queue eagerly awaits more Kimmy Schmidt). This was one of those moments that draws a bold line between people who like Gotham’s style and those who do not. The villains on this show are cartoonishly villainous. There’s no morally grey antiheroes here. This ain’t Walter White cooking meth for his family. Yeah, Theo Galavan is technically doing this for his family, but how does letting Penguin’s mother free then immediately stabbing her in the back further his goal? It’s just an evil moment solely designed to show how E.V.I.L this character is.

That’s Gotham, though. Characters will pop out their own eyeball, shoot a random bystander in the face or murder your mother for no other reason than the script saying [BIG VIOLENT MOMENT HERE]. For the most part, I don’t mind. From the dialogue to the storylines to the presentation itself, Gotham is basically a live-action cartoon. It’s a comic book brought to life. But where season one struggled with the balance of tone, season two decided balance is for squares in blue tights and went full stop ridiculous. And it’s entertaining. It’s fun. It is what a comic-book TV show should be. But it can occasionally dip into “too much” territory. At least when Wile E Coyote tried to murder Road Runner, he had some reason for doing so.

Unlike the residents of Gotham City, who have NO REASON to keep RSVP’ing yes to parties in Gotham City. Not to beat a dead Carol Kane but I’ve told you before! What benefits could Theo Galavan’s mayoral election party offer that are worth a 99% chance of being gassed/shot/lit on fire/eaten? (Other than that amazing massive portrait of Galavan looking like damn Zordon from Mighty Morphin Power Rangers, of course). But they went anyway, and of course the party was invaded by an army of Penguin look-alikes. Gotham party planners should just put this picture on the cover of all invitations going forward. 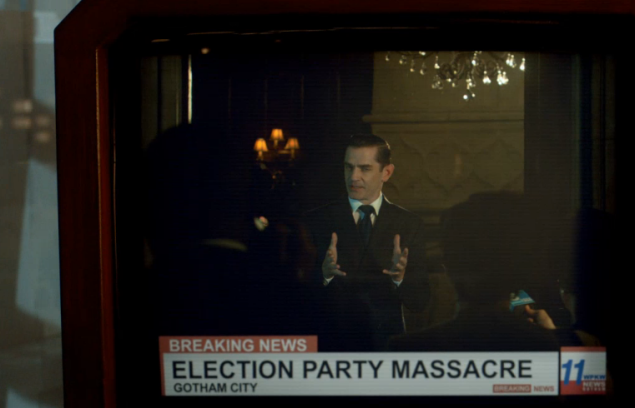 At least then it wouldn’t be false advertising. Although I had to laugh, because the march of the Oswald look-alikes — with their trench coats, floppy hair, limps and fancy canes — looked exactly like a crowded street in Brooklyn on any given day.

But we end this episode with the puzzle pieces re-arranged – Jim is standing opposed to Galavan, Bruce and Selina are on the outs because of Bruce’s strange puberty-feelings for Silver St. Cloud, and Penguin has gone rogue, baby.

Oh, and Butch went through some developments, too. What, exactly? Not sure, because Gotham is happy to gloss over the fact Butch was horrifically tortured into conditioning multiple times, now. Poor Butch, man. At this rate that fucking guy is going to be the real Joker.

As always, let’s run down every reference, fact and nugget of Bat-history brought up in Season 2, episode seven, ‘Mommy’s Little Monster.’

Stuffed into the candy machine

This episode’s entire Eddie Nygma subplot, which basically served as an origin story for the Riddler himself, strayed dangerously close to the Stuffed Into The Fridge trope. From TVTropes.org: “A character is killed off in a particularly gruesome manner and left to be found just to offend or insult someone, or to cause someone serious anguish.”

The name comes from a Green Lantern story from 1994, in which Major Force murdered Kyle Rayner’s girlfriend Alexandra DeWitt and literally stuffed her body in Rayner’s refrigerator. Gotham‘s twist on the subject is Eddie did it to himself.

The thing is, the Green Lantern story and everything it spawned has a baaaaad reputation. It inspired comic book writer Gail Simone to create the website Women in Refrigerators, a comprehensive list of “superheroines who have been either depowered, raped, or cut up and stuck in the refrigerator.” From the site’s still-existing opening: “This is a list I made when it occurred to me that it’s not that healthy to be a female character in comics.”

Since then, the trope itself has generally been looked at as lazy writing, a way to move a male character’s arc along using a female character as a prop. In regards to Gotham‘s Riddler arc, that is…pretty true. I mean, what do we know about Kristin Kringle besides the fact she worked at the GCPD and had shitty taste in men? By the time the audience started to get to know her, she’s already dead and stuffed in…well not a refrigerator but a candy machine (which ironically is what I call my refrigerator). Eddie spends about 3/4 of an episode feeling regret, before he merges with his “other self” and learns to love the crime he committed. Boom, we have a Riddler, Eddie has progressed and I bet a full stack of comics Kristen is rarely mentioned or thought of going forward.

If we’re on the subject, actually, most if not all of the above can be applied to Oswald and his mother. Least Eddie left a note.

What the hell happened at Arkham?? 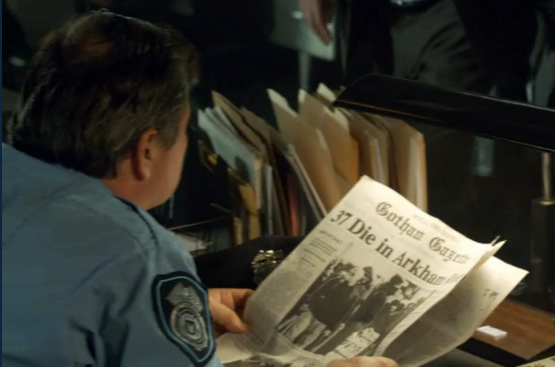 Nothing is more indicative of what it means to be a Gotham City police officer than this dude sitting at his desk casually reading about 37 PEOPLE dying during…something at Arkham. Thirty-seven people is so many people! Why is no one talking about this in the police station?

I’d keep that headline in mind going forward, Gotham-watchers. I mean, it could amount to nothing. But this show rarely so prominently displays newspaper headlines (trust me, I look for this little stuff). And in Gotham‘s new-found serialized format, a little foreshadowing is not out of the question. Maybe 37 people died in an experiment gone wrong. Or a knife attack. Or an ICE STORM? 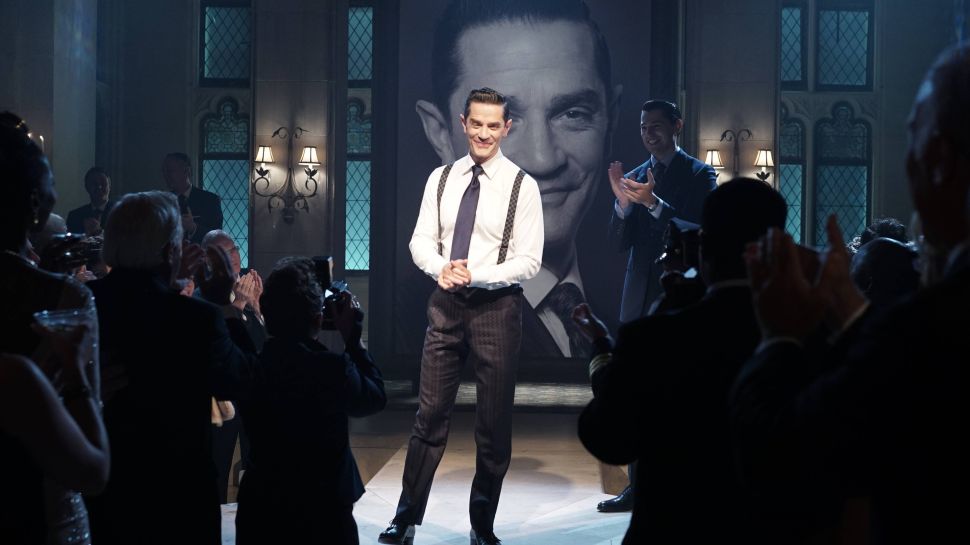