I don’t envy TV writers, I really do not. Because the two things audiences demand, more than anything, is 1) realism and 2) the story move along naturally. What some audiences don’t seem to realize, however, is that in a TV narrative, those two feats are basically polar opposites. You’re playing with characters in a fantastic, fictionalized world—say, Gotham—and they are fantastic, fictionalized characters with fantastic, fictionalized motives. And YET, you still have to spur these characters along, get them from plot point A to plot point B. This means sometimes what a harsher person would call “plot holes” occur, but they’re really more like plot jumps—occasionally a character has to be a little dumber for the story to move forward, or make a decision that no rational human world would make. It’s the reason victims in horror movies always run upstairs, and we always meet rom-com protagonists in the middle of borderline abusive relationships. The best writers hide these plot jumps well, or make them so minuscule the audience doesn’t even notice. And, as someone that reviews TV, I’m usually pretty O.K. with them.

I mention this only as contrast to the fact that I was not okay with the events that occurred to move the plot along of last night’s Gotham, titled ‘Tonight is the Night.’ There is necessary story advancement, and there is laziness. There is accepting the constraints of storytelling, and there is having your intelligence insulted. There are plot jumps, and then there is strapping the plot to a line and performing the damn grapnel boost from Arkham Knight over the entire city (we can actually only be friends if you get that reference).

Let’s start with how utterly useless the police department in Gotham City is.

So Barbara shows up at the GCPD station, telling Jim there is something she needs to show him. Jim, desperate for info, suggests they go along with her and see what happens. Okay, not the best plan, but 100% more of a plan than any other cop in the building has, or ever will have. And it’s not like Jim, or Bullock, or Commissioner Pumpkin Head trust Barbara – they know it’s a trap. Despite what, for some reason, everyone keeps saying, this is not Jim going rogue without backup because danger gives him a stiffy. It’s a carefully coordinated plan, with the full strength of the GCPD behind it, which wouldn’t even be that dangerous if more than one-and-a-half people in the police department could tie their shoes without being murdered by a villainous henchman.

But no, a big truck slams into Jim and Bullock’s car and the rest of their squad is like “Oh noooo how could we have expected this?” And somehow—never explained—Bullock walks away from the truck accident with minor bruises, and nobody has the faintest idea where Jim is. Remember, this is a plan that they could have been watching from, like, 500 different angles. Look, I get it. The point of the GCPD is that they ran around accidentally lighting their pants on fire until Batman shows up and is like “what if we just punched crime?” But this goes beyond comically bumbling, or understandably inept. At this point it’s actually a miracle that someone set up a coffee machine in the GCPD rec room without accidentally killing half the payroll.

Anyway, while Bullock pours over audiotape that somehow wasn’t destroyed by a speeding 18-wheeler, Barbara has Jim trapped in a church. Not only does Barbara plan to murder/marry Jim, she has brought Leslie along to…wait whaaaaaat? How did Leslie get captured? Was she not at work, you know, inside the police station?

It’s unfortunate, really, because everything after and around the Barbara and Jim set-up actually combined into one of the best Gotham episodes of the season. Bruce Wayne’s debate over selling Wayne Enterprises to Theo Galavan was elevated by the fact that David Mazouz is a better actor than any human his age has any right to be. The eventual Jim and Barbara face-off was genuinely thrilling, and felt natural (more on that in a second), and I’m even cool with the cliff-hanger-y promise of a Eddie Nygma and Oswald Cobblepot team-up. We all know they eventually turn into besties anyway. 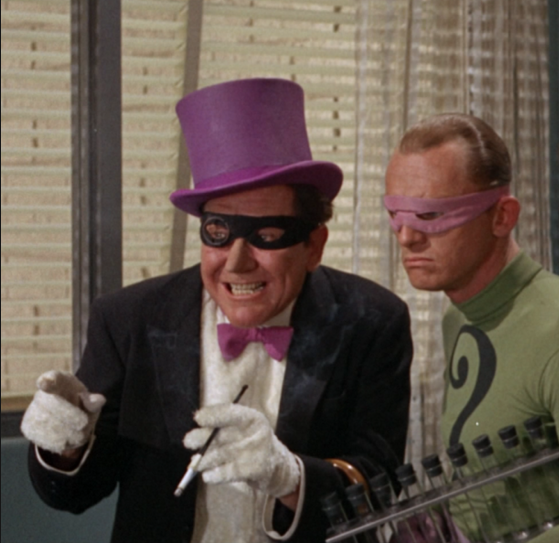 As always, let’s run down every reference, fact and nugget of Bat-history brought up in Season 2, episode eight, “Tonight’s the Night.”

….or let’s not. There really wasn’t much in the way of references this week, unless you want me to answer Eddie’s grave-side riddle (the answer is sleep) or to point out how Oswald stealing Nygma’s sandwich is a throwback to when he murdered that dude and ate his sandwich all the way back in Gotham‘s pilot.

Barbara Kean was far and away the biggest issue with Gotham‘s first season. It seemed, week to week, that while the writers definitely wanted Barbara around for later, they sure as hell didn’t know what to do with her at that very moment. She was a blindly doting fiance one week, a jealous girlfriend the next, or a lesbian drug addict who cheated on Jim, or a lesbian drug addict that was mad at Jim for finding a new girlfriend, or just someone who got herself kidnapped by making horrible choices. In the end, inexplicably, she was also a crazy homicidal maniac. Was she always that way? Or did Peter Petrelli from Heroes drive her insane? That…has never really been explained.

With that said, Gotham has performed actual miracle work by turning Barbara not only into a convincing villain, but transforming her into Jim Gordon’s version of the Joker. I don’t even mean that in a Reference Guide-y type of way—I don’t think Barbara’s ever going to dye her hair green, or put on clown makeup, or squirt anyone with acid from a flower. It’s in the relationship, not the wardrobe.

I’ve written before on how The Joker isn’t Batman’s arch-enemy because he’s a clown, but because The Joker is a stand-in for Gotham City itself, and by proxy for the history Bruce Wayne can never change. Likewise, there is nothing Jim Gordon hates more than his past, or the fact that he’s made mistakes. Barbara is his biggest mistake, the mistake he can never erase. And maybe he doesn’t even want to, just as Batman can never bring himself to kill The Joker.

We see all this in “Tonight’s the Night”—the shadowing of Barbara and Jim’s face in the interrogation room, Barbara’s Joker-esque claims that no one knows Jim as well as she does, and the nugget of truth to those words. And when Jim has the chance to end it, to just let Barbara fall, he instead tries to hold on to her. Think back to Christian Bale’s Batman stopping Heath Ledger’s Joker from plummeting to his death in The Dark Knight: “I think you and I are destined to do this forever,” Ledger’s Joker says.

Barbara’s wedding plans may have fallen through, but thanks to some opportunely placed shrubbery she and Jim are still bonded forever. Til death do them part. 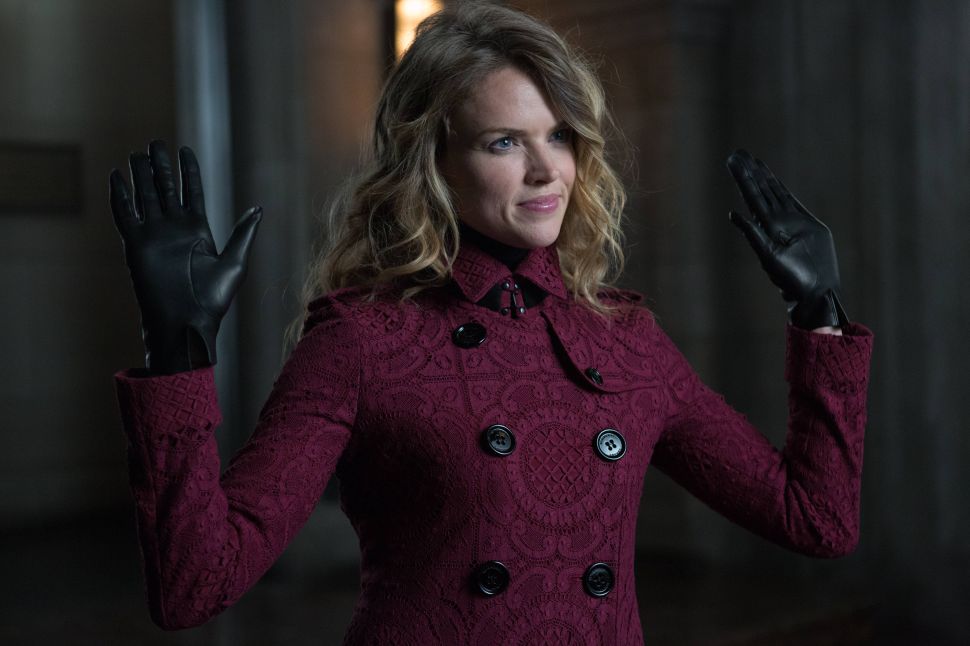