With both Eddie Nygma and Oswald Cobblepot’s penchant for using knives, it was only appropriate that on last night’s Gotham they provided inspiration for so much slash fiction.

Funny enough, I really enjoyed that aspect of ‘A Bitter Pill to Swallow,’ alternatively titled How Oswald Got His Groove Back. Normally, Gotham’s character strokes are so broad Arnold Schwarzenegger’s chest is like “whoa, chill out.” The writers are usually content with someone switching on a violent, murderous dime just because, uh, they are cuhraaaaazy now. Motivation and reasoning isn’t on the list of things Gotham does well. But here, we have two men — Eddie and Oswald — showing shades of the super-villains they eventually become for actual, tangible reasons. What a concept!

Robin Lord Taylor and Cory Michael Smith have always been Gotham‘s unheralded MVP’s, if for no other reason than they both commit 100% to the lunacy of it all. Here, they somehow pull off Eddie and Oswald’s conclusion that the women they loved -and, in differing degrees of involvement, were responsible for getting killed — are better off dead in the long-run. Mr. Michael Smith especially, who until now had to occasionally deal with episodes where his only lines were [nervous titter], knocked it out of  the park. I was so worried that when Eddie first presented Oswald with Galavan’s lackey, Oswald was immediately going to shrug off the death of his mother because Oswald just can’t turn down a good stabbin,’ or something equally half-hearted. But it took an actual character development, a real realization, and now we have a future penguin that is both motivated and freed by his mother’s murder. It’s not exactly Walter White, but it’s miles away from “he’s a villain cuz comic books says so.”

Commissioner Barnes, too, got some much-needed backstory that filled in some holes that even Michael Chiklis’ perfectly round head couldn’t fill. On a show filled with characters stubbornly stuck to the law in a lawless city, Barnes was somehow the most dogged. Dude walked into the GCPD, smashed a chair, and vowed to do whatever it took to clean up the system. But not, like, WHATEVER it took. Just the kind that breaks zero rules and requires hours of paper work. It takes a certain kind of character for me to be like “Hey, Jim’s making a lot of sense here.” But in a speech with that much more gravitas because Chiklis is an under-appreciated boss, we learn Barnes once accidentally shot a kid in the mouth because he crossed that thin (blue) line between justice and murder. Like Oswald and Eddie, this little bit of background fills out what used to be a stock character. Barnes is painted in a whole new light, one that isn’t just screaming LAW IS GOOD AND CRIME IS NOT-GOOD *smashes chair*.

So two steps forward character-wise, but one step back in terms of story. That final scene had exactly the opposite amount of impact it needed to introduce these hooded men as the new big threat. It only felt like an outline of a scene that made sense, but then someone decided all they needed was someone to get stabbed. How long have you lived and worked as a security guard in Gotham City, and you still don’t know approaching the large group of hooded figures and asking for ID is going to get you good and murdered?

As always, let’s run down every reference, fact and nugget of Bat-history brought up in Season 2, episode nine, “A Bitter Pill to Swallow.” 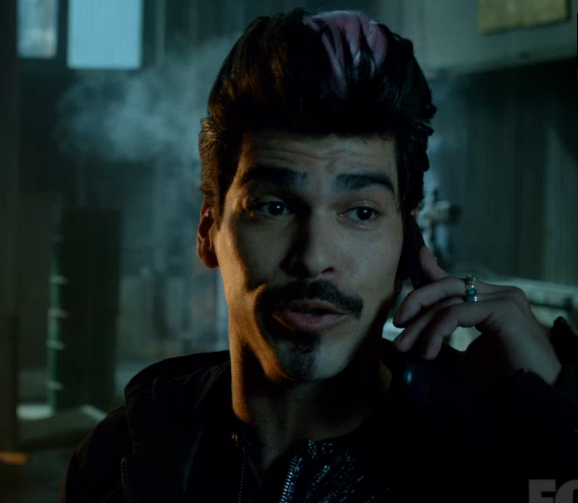 So the through-line of the episode was Tabitha Galavan went knocking at this secret assassin speakeasy to put out a hit on Jim Gordon’s head. And for her sake, I truly hope that speakeasy offers refunds because one-by-one they utterly fail to kill Jim Gordon. The man who comes closest is the incredibly named Eduardo Flamingo, who in addition to being a hired killer, also eats human flesh. If you’re keeping count at home, that is cannibal numero dos for Gotham season two. Consistency!

The Flamingo of the comic books shares a ton of attributes with guest star Raul Castillo’s portrayal. Eduardo was a normal man, until the Mob kidnapped and brainwashed him into a hitman that eats his victim’s faces, as Mob tend to do. He originally traveled to Gotham to take out Batman and Robin, but ended up running into Jason Todd’s Red Hood and his mentee Scarlet. This ended with Red Hood running The Flamingo over with a bulldozer, because this is how problem’s are solved in comic books.

What Gotham‘s Flamingo lacks, and I cannot express how large of an opportunity the show is missing here, is the bright pink jacket and motorcycle. 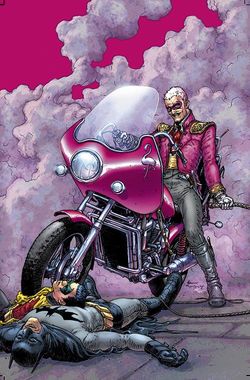 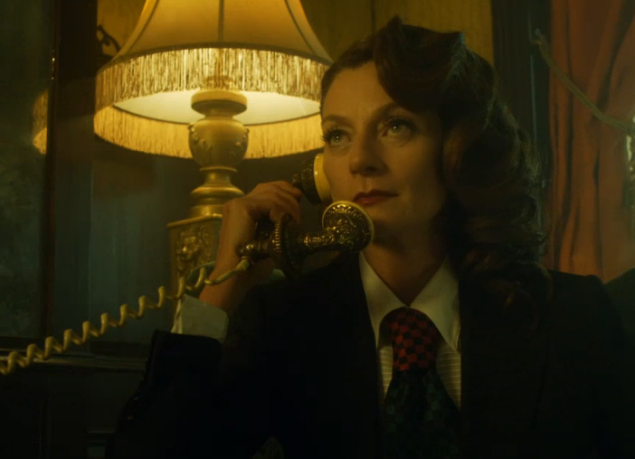 So what about that aforementioned assassin speakeasy? Honestly, it seems like a Gotham creation (not secret enough to be Court of Owls, not satanic enough to be Hellfire Club, not nearly enough ninjas for League of Shadows). As far as those go, on a coolness scale of one to ten,this place is like a six. For those wondering, ten is The Balloonman. The Balloonman is perfection.

I can tell you the woman pulling the shots is known as The Lady, and she is played by none other than Michelle Gomez. Ms Gomez, of course, spends most of her time making the titular Doctor of Doctor Who‘s life miserable as Missy. I can ALSO tell you that the song playing in the bar during the cold open is ‘Peaches,’ by The Stranglers.

Then The Lady sends someone to strangle Jim Gordon with piano wire. Oh Gotham, you and your subtly. 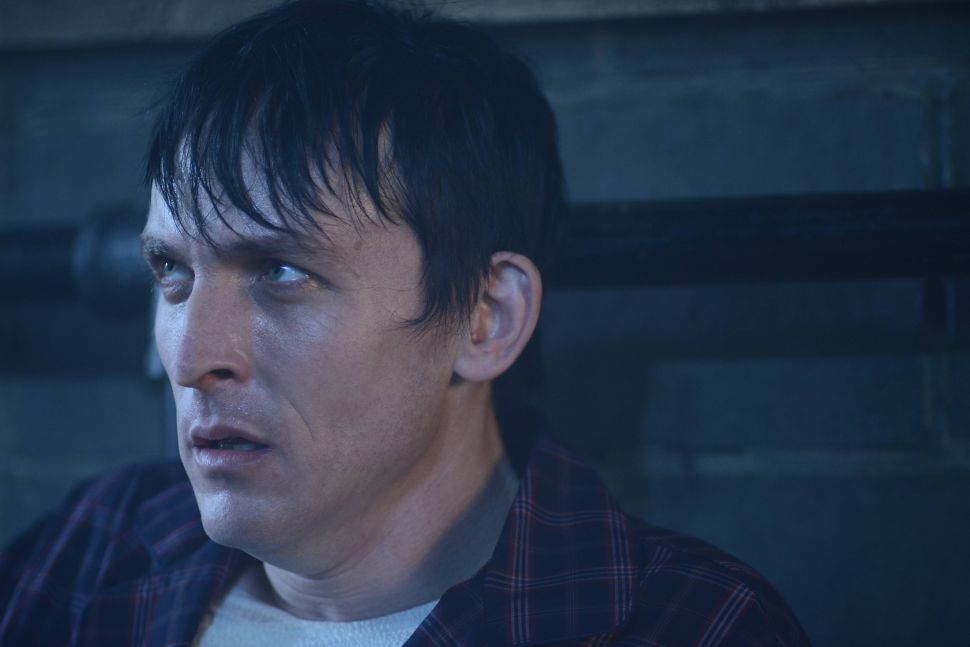