ATLANTIC CITY – Lt. Gov. Kim Guadagno addressed the crowd at the closing luncheon for the New Jersey League of Municipalities, calling on Republicans and Democrats to put partisan politics aside and restore the trust of the people of New Jersey. During her speech, she discussed how Democrats and Republicans need to come together in order to address what she called the “number one problem in America”: government.

“We have forgotten that a political boss is not someone with a superPAC,” she said. “Our bosses are those that walked into the voting booth on November 3rd and pulled a lever.”

According to the Lt. Gov., this week’s event had little to do with partisan politics and more to do with getting things done on the state and local level in New Jersey.

One of the issues she touched upon were the double-dipping pensions that are authorized in New Jersey.

“Can’t we all think about the things we all agree on and think about those problems moving forward so we can give our constituents, our bosses, the hope they need?” she said. “If you set aside all of our egos, aren’t there pieces of the pension we agree we need to get rid of? Why do 40 out of 50 states in America ban dual pensions? Lets sit down and talk about banning duel pensions. I’m talking about looking forward. Stop the bleeding. Fix it now. Not for us, not for any of us. But, for your kids.”

Guadagno also talked about the need for bipartisan compromise that does not focus on the ideological issues the two parties “will never agree on.” She mentioned sick leave, saving tax dollars, fixing the transportation issues and “putting people over politics” as issues that would be worth focusing on in order to bridge the gaps. According to Guadagno, the decline in voter turnout can be directly tied to the distrust voters have for elected officials on both sides on the aisle and that that trust can be regained if steps start being taken to fix issues on the state and local levels.

Guadagno, a likely candidate for governor in 2017, said that she hopes that in 100 years, today can be looked upon as the day politics was put aside for the betterment of New Jersey. 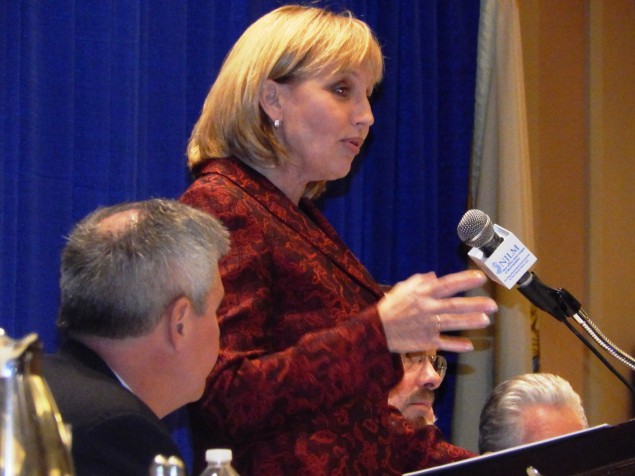