A top real estate company official recalled today how indicted ex-State Senate Majority Leader Dean Skelos shook down himself and other industry leaders for donations ahead of votes on key issues—while simultaneously pestering him to get work for his son, Adam Skelos, who is also on trial.

Charles Dorego, chief counsel for luxury developer Glenwood Management, testified how the Nassau County Republican used heavy-handed threats to extract political contributions during election years while the industry lobbied the pol on key issues—and all while the legislator and his son incessantly pestered him for employment opportunities. The lawyer, who handled much of Glenwood’s political work, said the company hoped to obstruct the passage of campaign finance reform laws, see the controversial 421a tax abatement renewed, obtain a favorable tax cap on revenue from apartment buildings and to prevent Democrats from taking control of the State Senate and giving control of the New York City rent laws from Albany to the City Council—which Mr. Dorego compared to “an atomic bomb.”

Mr. Dorego recalled a 2012 exchange with the then-majority leader in which Mr. Skelos imparted a warning for Related Companies partners Stephen Ross and Bruce Beal about what would happen if they didn’t contribute more to the State Senate Republican Campaign Committee.

“If they didn’t pony up and step up to the plate he was going to F them,” Mr. Dorego said. “He was visibly angry.”

All the while, both Skeloses were constantly contacting Mr. Dorego about possibly getting Glenwood to buy title insurance or natural gas through the Republican leader’s then-30 year-old son. The attorney recalled the legislator talking with him ahead of a 2012 meeting with Mr. Ross and Mr. Beal at Porter House Restaurant on Columbus Circle—a meeting where the three were to discuss key races and the effort to block Gov. Andrew Cuomo’s campaign finance reform proposals—where Mr. Skelos impressed upon him his son’s urgent financial needs.

“‘Can we do something for Adam? He needs some help,'” Mr. Dorego remembered Mr. Skelos telling him. “I just felt like we were being badgered at this point.”

Mr. Dorego said he had stuck upon the scheme of having Abtech, a municipal treatment start-up that he and Mr. Litwin owned shares in, hire the Skelos scion as a salesman. He said both Skeloses repeatedly insisted that such an arrangement would take too long, which resulted in Mr. Dorego negotiating the 30-year-old’s contract with the company personally.

Emails between Mr. Dorego and Abtech President Glen Rink showed the Glenwood lawyer repeatedly emphasizing the younger Skelos’s parentage and how he could “exploit his father’s contacts statewide.”

The attorney said his hope was to satisfy the father and son and keep a degree of separation between the younger Mr. Skelos’s source of income and the real estate company.

“I thought it would be very good to have his own thing away from us, away from Glenwood,” he said. “I was feeling an awful lot of pressure to make something happen for him. It made me very uncomfortable.” 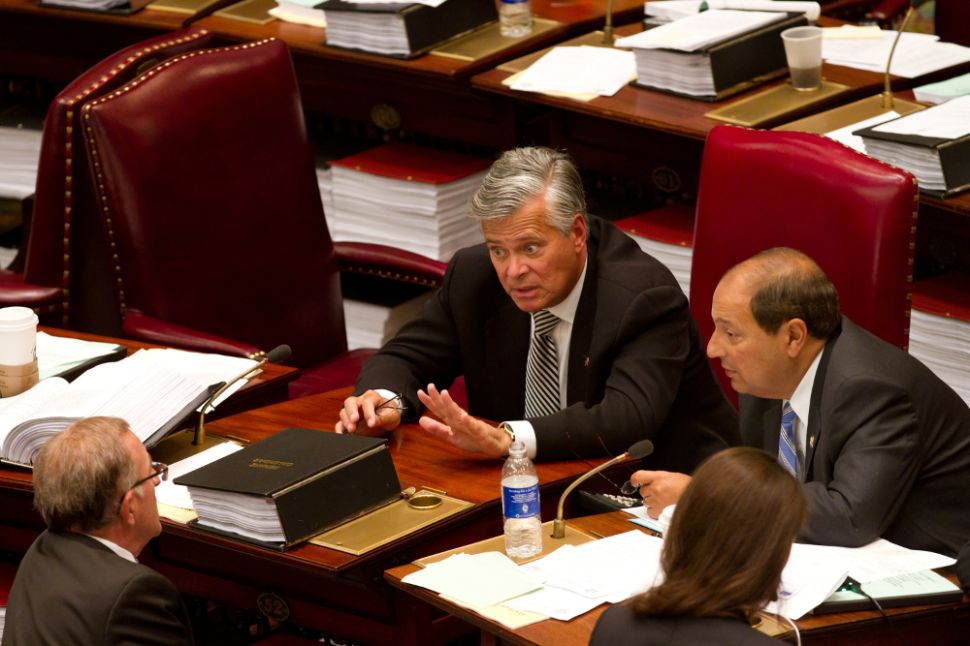