The eighth episode of Heroes Reborn raises an important philosophical question. If you saw yourself somewhere about to shoot someone with a gun, would you stop yourself?

That question is too simple, though. Let’s assume a few things about yourself: a dramatic disaster has just gone down and you barely survived. You happen to know that time travel is real, so you are relatively confident that that the you that you see that isn’t you is a you from the future (or from the past). Lastly, you have been known to shoot people without especially regretting it.

In light of all that, if you saw you standing in front of you, gun out, taking aim at an unsuspecting fellow human being, would you stop yourself?

Noah Bennett (aka, HRG) would.

He is the character on the show whose chief trait is always that he’s right. Even when he’s wrong. When he finds out he’s wrong, he becomes just as confident about being right again right after he finds out what he was wrong about.

So here’s what happened: shortly after the opening of “June 13th—Part Two,” Noah Bennett of the present, in light grey, sees Noah Bennett of the future, in dark blue, walking purposefully through a hospital after a giant explosion that killed a lot of people.

Dark Blue is about to shoot Erica Kravid, the Renautas CEO. Lite Grey had been a member of her security detail, but she had just very shadily kicked him off of it, thrown out his security plan and the whole place had blew up right after. Something like that might make a guy suspicious, but when Lite Grey sees Dark Blue about to plug her, he jumps him/himself.

So, if he sees himself about to do something he doesn’t understand, he’ll stop himself? Existentially, he doesn’t trust himself. Is that existential? Or is it more metaphysical? Or is it why-time-travel sucks?

Shortly after the shooting, we see Hiro, the time traveler and teleporter, back in the past with Mrs. Petrelli, the mother of Nathan and Peter Petrelli. Hiro quickly realizes that his power isn’t working. Mrs. Petrelli guesses that the boy, whom Hiro is holding, has a version of Peter’s power: he can absorb powers.

In the baby’s case, he doesn’t just copy them (as Peter and Sylar did, on Heroes), but he also takes them away. So Hiro is stuck in the past with the kids, with no special ability.

This also provides an explanation for how Claire Bennett might have died. The boy might have robbed his mother of her powers as she was giving birth. Then, baby Nathan lost his mom’s healing power when he came in contact with Hiro.

So Claire might actually really be dead, as implausible as that is. Talk about going out with a whimper (we still 15% don’t buy it).

The next interesting reveal in the post is Carlos Gutierrez talking about his heroics in Afghanistan. It turns out, he didn’t do anything impressive to save his friends. It was his girlfriend, Farah Nazan, the invisible woman in the early episodes, who we first meet watching out for Malina. Ms. Nazan asked Gutierrez to lie for her, because it covered up the fact that she had powers, which she had used to save their brother in arms.

They both get discharged from the military, and she tells him that she’s going back to her old company. Judging by the fact that we have seen her watching Malina, it’s a fair bet that the company was Primatech, which employed HRG when he seemed to be a bad guy in the old show.

Gutierrez is pretty bummed she’s leaving him, which we can totally relate to. She is not exactly gentle, saying, “If you’re uncomfortable with an honor you don’t deserve, live up to it.”

So first he starts drinking but then later he kind of becomes Batman.

Back at June 13 (not at the present), Molly Walker (she’s dead in the present) tries to find Hiro with her power. She can’t find him, but she can see his power (that turns out to be Nathan/Tommy).

Dark Blue HRG heads off with Molly to find them, but Harris Prime shows up and captures Lite Grey, just as he and Mr. Penny were about to go out to the blast site to erase Lite Grey’s memory.

Instead, Harris ties up HRG and brings back an old friend from the first season, Matt Parkman, the telepath. Parkman is just about to strip the information out of HRG as to where to find the kids, when a penny comes spinning into the room. Noah puts his foot on it and all his memories are gone.

Dark Blue arrives at some suburban house and an older looking Hiro answers the door. Dark Blue meets his grandson, who says, “I’ve been waiting for you.” The grandson shows that he’s learned to use his adopted dad’s power and he sends Dark Blue back to the future.

Then  Hiro protects his wife and family against three different Harris’s, who have three guns between them versus Hiro’s two swords.

Papa Otomo, the creator of Katana Girl, goes to his fate. The Collins’s flip out about their kid being dead and the craziness of Mama Collins is first seen (Zachary Levi appears to be trying to prove he can play a serious role, but Luke Collins is more tedious than anything). The Frady siblings are reunited. That’s about all the parts that you are going to completely forget because you won’t care about them from this episode.

Before the episode ends, Mr. Penny makes HRG forget the day. If it was just the day, though, why didn’t HRG ever mention that he had worked for Erica Kravid before? Why did he seem so baffled to learn that her company owned Primatech? He should have known that.

Mr. Penny also makes Nathan/Tommy forget just about everything. It’s not clear why he has to forget so much, but he does. His ignorance fuels a lot of drama later.

Back in the now, HRG immediately meets Quentin Frady (who was supposed to be dead), and it becomes clear that he’s working for Erica. Or is he a shapeshifter? It was Frady, after all, who introduced the idea that Kravid might have a shapeshifter on the payroll when he confronts her early in this episode. That would be one instance of elegant writing on this series.

That said, double crossing HRG would fit with his rather cowardly character. Plus, it would mean that he and his sister had actually been together all along. So nice.

Here’s my bet for the ending right now: after Dark Nathan/Tommy goes through a very dark period where he tries to hi-jack Erica’s whole plan in order to help himself, he fails. At that moment, they convince him to help Malina stop the solar flare, but she isn’t strong enough.

Peter Petrelli pops up for a fans-go-crazy cameo and he copies Malina’s power. Then Nathan steals that power from Peter in order to join his sister in protecting the planet. Then, when the future time arrives and Erica’s chosen ones start coming out of the portal, HRG is there to arrest everyone.

I still don’t trust that kid with the ears. 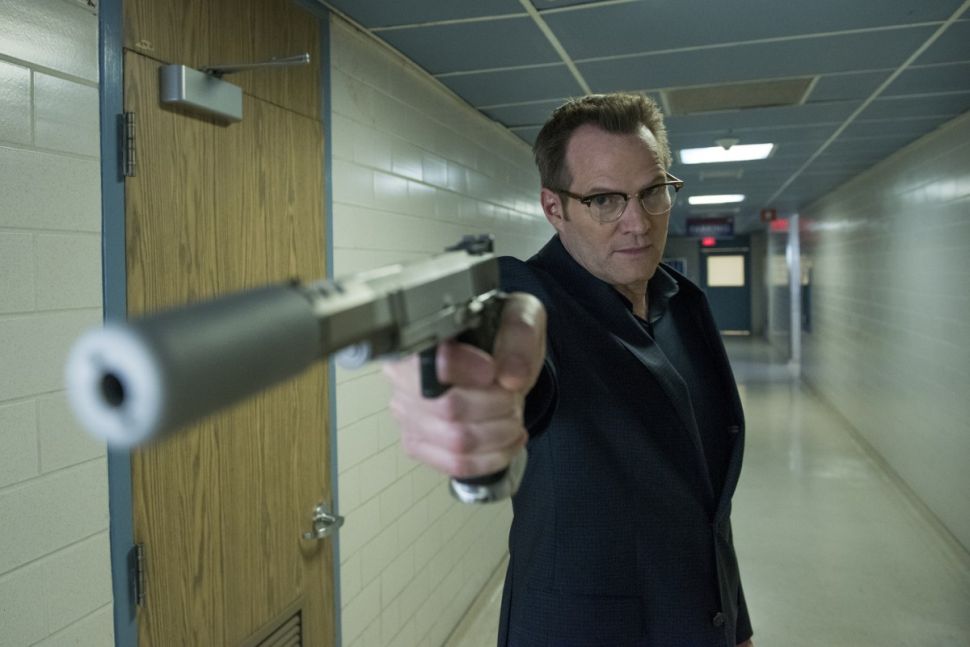