Noah Bennett is going to have to die, isn’t he? Whether or not they ever try to make another Heroes season again or not, it seems like Noah has to die. Here’s my reasoning: the 9th episode of Heroes Reborn begins to give us the glimpse of the motivation driving Carlos Gutierrez. He’s a coward who received an honor as a hero.

He also doesn’t have any powers.

Tim Kring and his writers are setting this all up so that when Carlos Gutierrez does something very brave at the end of this series it will mean more now that we know how badly he choked under fire in Afghanistan, but it’s hard to imagine that there is space in this show for two non-powered heroes. That’s the role that Jack Coleman’s Noah Bennett always filled, but my bet, now that we’ve seen what Carlos has been hiding, that he’ll be the one that torch will be passed to.

And if the torch gets passed on, it will be with the death of HRG.

Not that it would be very safe to assume that that torch will get carried anywhere.

The standout aspect of this story is the development of Carlos’s story, though Nathan/Tommy’s and Luke’s all take a big step forward. At the start of the show, Carlos is on the way to Sunstone Manor, hooked into one of those power dampeners, being driven in his boss hot rod by James Dearing, the super strong cop.

Dearing, it turns out, has left Carlos’s cuffs uncuffed however. For some reason, Dearing has found common cause with Gutierrez, and it seems to run deeper than money.

Dearing, you may recall, treated Carlos with some weird vial that will make it look like he has powers. It knocked Carlos out. Carlos expresses doubt that the vial will trick them. Dearing says it will, but that he won’t be able to fool the place’s director. “He gets into your head,” Dearing tells him.

Nathan/Tommy goes to see his mom in the hospital and he tries to have a heart to heart with her. She’s ready to tell him the truth about his background. It’s set up to be an important moment between parent and child, but Noah Bennett does his thing and steps in, ruining the moment.

What can I say, though? The guy just lost his daughter forever. He’s a little jealous.

The point, though, from a plot standpoint, is that he learns he has Hiro’s powers. Noah confirms for him that that includes time as well as space.

What they don’t seem to tell him, though, is that his true power is stealing other people’s powers.

After a really blatant bit of Cadillac product placement along “Luke and Malina’s Very Boring Road Trip,” we get back to Carlos. He’s being led deep into the manor’s rooms by one guy. At an opportune moment, Carlos gives him a pretty serious beat down. Then he switches clothes, which allows the directors to give us a pretty blatant product placement for Ryan Guzman’s abs. Gutierrez’s plan seems to be that if he can just get his hands on one of those yellow polos then he can basically have the run of the creepy evo camp.

Much like HRG and Frady wandering the campus of Renautas openly in earlier episodes, Carlos just walks around the open grounds of Sunstone Manor without anyone giving him much trouble. He finds his nephew and the priest, but neither of them want to go. Cruelly, we see Carlos’s nephew talking to a hallucinated vision of his dead father. In fact, they seem to have been brainwashed to be afraid of Carlos.

As he realizes he can’t seem to get them to go, Sunstone Manor staff start coming out after him, as Officer Dearing is getting tased back in the front of the house. The yellow shirts win handily.

Meanwhile, Taylor, Erica Kravid’s daughter manages to connect with the Hero Truther crew. They couldn’t be much more creepy about it than they are, but by the time it’s done, it appears that The Haitian is still alive. She agrees to help them rescue their leader, Micah, if they’ll help her rescue her sketchball gambler boyfriend.

Seriously, lady, it was just a dumb boyfriend. It was not going to last. That guy was not the staying kind.

At the hospital, Frady gets super creepy with Nathan/Tommy. Then he makes it look like he might be ready to kill him, but the kid disappears.

Meanwhile, at the ice cream shop, Mr. Penny is weighing some heavy thoughts. He goes there to see Nathan/Tommy’s girlfriend, Emily. He considers wiping her memory of Tommy from her but seems to think better of it. She goes to serve someone else, and it turns out to be Joanne Collins, the sociological bereaved mommy, and Luke Collins’s estranged wife.

Mr. Penny is just about to handle her full craziness, though, even as she swears she’ll kill them both. She has Emily and Mr. Penny sitting at the ice cream shop’s bar, while she talks crazy waving a gun around. Mr. Penny is totally chill. As I watched this, I was in this moment thinking I wish they would make a whole movie just about Mr. Penny. He’s really the standout character of this whole mini-series.

Wouldn’t it be great to see him amble slowly through some global crisis, fixing everything in his completely chill way? Yes. Sign me up for that.

Then Nathan/Tommy appears right in the middle of the ice cream shop, as Mr. Penny is just about to convince crazy mommy to let him do his thing. Collins freaks out, and she shoots Mr. Penny.

That’s when Luke and Malina show up. Luke holds up a hand full of fire and Joanne points her hand at Emily and says she’ll shoot her.

“I’ll tell you what,” Joanne says, “I’ll shoot her. You kill me. And everyone wins. I’ll be with Dennis.”

She fires the gun.

And Nathan/Tommy discovers his time power in that moment. He freezes time, saves Emily and teleports her out of there.

The next time we see Malina and Luke, the cops are taking statements from them inside the ice cream shop and Noah Bennett shows up. He tells the cops and Malina that he’s her grandfather.

Back at Sunstone Manor we see Carlos Gutierrez go through this crazy dance with Matt Parkman, where Parkman sees his whole memory of choking in Afghanistan, clarifying why he was drinking so hard at the start of the season.

Parkman watches it all and notices the woman who saved everyone in Carlos’s stead. He says, “Farah Nazan. That’s interesting. You might be more useful after all.”

The last few scenes of this episode are very strange. We see Nathan/Tommy back at the hospital, but his powers aren’t working anymore. The reason is because Frady’s sister has blanketed the place in darkness. So the Frady’s catch Nathan/Tommy and take him to see Erica.

The part that is weird here is that Frady’s sister touches Tommy. Doesn’t his power work by human contact? Shouldn’t he have Phoebe’s power now? Unless he doesn’t because Phoebe’s power had turned off Tommy/Nathan’s.

It’s confusing. I’m willing to bet there won’t be a clear explanation.

If you’re keeping score at home: I was right that the camp counselor at Sunstone Manor, where the L.A. cops have been taking the pilfered evos, is Matt Parkman. I don’t know why they felt it necessary to drag that revelation out so long in this episode.

I might not have been right about Luke Collins powers (especially now that we know what Tommy’s true power is). Fire may just be Luke’s power. He may not be a power thief, like I thought. He still could be (he killed that coach who also had fire power when he first showed up), but the fire thing seems to be something they really want to identify him with.

There’s not a lot of time left for Tommy/Nathan to turn into the show’s next Sylar, but all they need to do is kill that pretty girlfriend of his for him to fully snap. I believe it could happen.

I believe in him.

It’s hard for me too be too excited about anything, though, because Mr. Penny is dead, and Mr. Penny was the best. 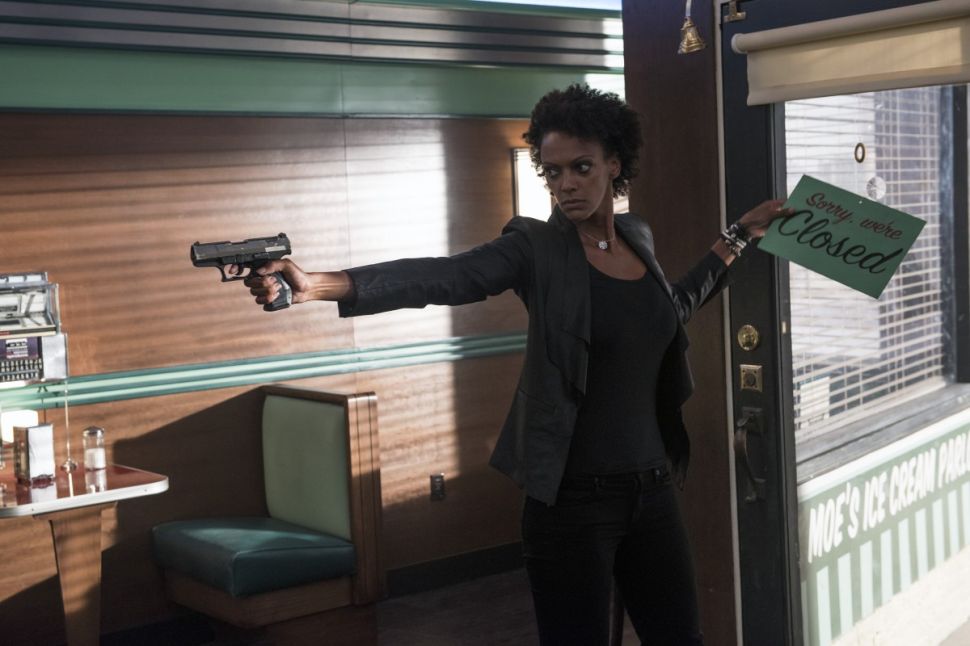