Saul and Carrie, the Ross and Rachel of Homeland, are back together again, and even the title of tonight’s episode, “Parabiosis,” proclaims it: they’ve been reunited to fight evil around the globe as only the power couple of the CIA can. It’s a another restart in a season that’s seen Homeland continually turning corners and tearing off masks. First, it had become a story of Carrie displaced: caring for Franny in Berlin while she made her way in the private sector. It’s since traded private sector drama for CIA drama for on-the-run-from-the-CIA drama, it’s switched antagonists from hackers to terrorists to Russians and back again, and it’s shifted its focus from data security to the Syrian refugee crisis to the American regime change industry to intra-spy strife. Such is the way of the modern prestige procedural, though: all is chaos until the enemies become clear and the team is reassembled. Then begins the sprint to the finish.

The sprint will begin some other time, though, because tonight Homeland spins its wheels a bit to ensure that when Saul throws in with Carrie, he does it at the expense of his good sense, his career, and a fair chunk of the security of the United States. We find that the ending of last week’s “Better Call Saul” was a bit of a fake-out. Although Saul is willing to take a midnight meeting with Carrie, he still doesn’t trust her and doesn’t want to help her. He’s unmoved by her pitch that the Russians have compromised Saul’s dead drop system in order to have her killed, that they want her dead to prevent her from learning information contained in the Berlin document leak, and that Saul needs to re-steal the documents from the CIA to show Carrie her path home. In Saul’s defense, that theory prompts a few logistical questions from the home viewing audience as well.

In any case, after a cruel tease, the reunion of the Dream Team must wait until Saul has spent one more episode being backstabbed at the CIA outpost in Berlin. Carrie’s paranoia has opened his eyes to the fact that he’s being surveilled, a fact that Allison is only too eager to confirm and to blame on Dar. Saul orders that the station be swept for bugs, which leads to an epic confrontation between Saul and Dar, during which we learn that Saul once leaked information to the Israeli intelligence community and that Dar knows that Allison and Saul are an item. Tellingly, although he’s unwilling to team up with Carrie to re-hack the CIA, Saul is willing to float her theory about the Russians to Dar. In keeping with the episode’s theme, Dar rejects that offer and orders that Saul face the dreaded CIA polygrapher. Staring down the barrel of the lie detector, though, he decides to break bad. He steals the previously stolen documents from the tech support guy’s computer and bolts.

Carrie, in the meanwhile, has been giving up. Since finding out that she’s a marked woman, her support network has crumbled. Quinn has run off into the night to die and Saul is holding firm in his mistrust. Jonas, fretting over the blood-soaked cot that Quinn left behind, decides to give Carrie an ultimatum: return to work and a normal life or continue down the rabbit hole without his help. Carrie chooses the rabbit hole, obviously, which leaves her with one friend remaining: Otto Düring. Luckily for Carrie, he credits her for saving his life and proves much more helpful than the last four men in whom she’s confided. He arranges for his private jet to fly her away to obscurity, and she gets down to the business of deleting all the pictures of Franny from her phone and lingering mournfully outside Jonas’s window.

Carrie isn’t Otto’s only friend, though, and before she can skip town, he’s visited by the second most erratic spy he knows, Saul Berenson. Saul gives him the stolen documents to pass along to Carrie on the hilarious condition that Otto not provide them to any of the transparency-obsessed muckrakers at the Düring Foundation.

“Parabiosis” comes packaged with a self-contained Homeland mini-adventure which tells the tale of Quinn’s convalescence. The good samaritan who thwarted his suicide turns out to be a doctor displaced from Iraq who secretly tends to Quinn in the apartment building he manages. Berlin is an extremely small town, though, and recently arrived to the building is Hajik, an angry jihadist just freed from prison because his sentence was vacated in light of recently revealed illegalities in Germany’s domestic surveillance program. Hajik immediately begins planning retributive violence against German citizens and shouting said plans into the vent that leads into Quinn’s bathroom. When they inevitably clash, Quinn, never too weak to high-road a terrorist, boldly dismisses Hajik as a lightweight who is about to get himself sent back to jail and should be fighting in Syria anyway. When Quinn has regained enough strength to leave, Hajik and his compatriots wait for him on the corner like Bernardo and the Sharks. After a short scuffle, Quinn crushes Hajik’s windpipe.

Thrilling as it is to see Saul finally throw his lot in with Carrie, he seems to be inciting the trouble that will plague them for the remainder of the season. Righteous though he may be, Saul has now stolen classified documents from the CIA and handed them over to the Düring Foundation. It would seem that the Russians’ plan to make trouble for America’s spies in Europe is proceeding nicely. Saul’s efforts are also frustrating in a narrative sense– a traitor to the CIA, he’s now less help to Carrie than he was when they weren’t speaking.

Homeland Season Five has been a complex and scattershot affair, introducing new characters and new power dynamics at every turn. Six episodes in, it’s begun to fight the sprawl by narrowing its focus to Carrie, Saul, and Quinn. Each is pinned in a dire situation, and Homeland seems to question whether they can really help each other at all. Here again, though, years of coloring outside the lines drains away some of the tension: each of these characters has betrayed the others before and all have shown themselves to be utterly undependable spies. When Saul initially spurns Carrie as unstable and untrustworthy, it’s only half tragic because he’s right. And now that Saul has marched America’s secrets into the hands of Otto Düring, the mechanics that will bring our heroes back together in a fight against the Russians are that much more strained and tawdry. Here’s to a Homeland Season Six about the travails of three former spies trying to operate a bed-and-breakfast. 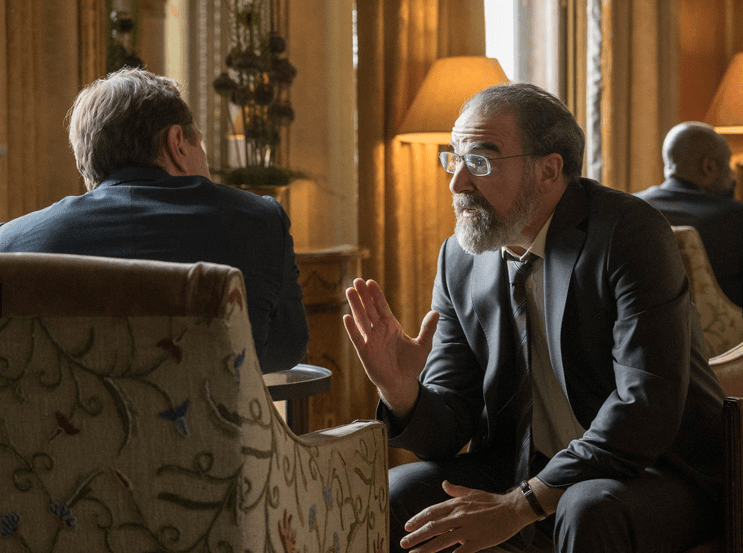