William Jefferson Clinton was a very good president and Franklin Delano Roosevelt was a truly great president and therein lies the tale of the battle for the Democratic nomination for president in 2016.

While Republicans discuss whether the presidential debates should be conducted like Pravda in the age of Vladimir Putin, where the party apparatchiks control the media, the Democrats discuss how to define the heart and soul of their party, and whether the party should take the case of true progressivism to the voters in November 2016.

Let me propose three truisms about the 2016 campaign that are vastly underestimated by virtually all political commentators in the mainstream media.

Bernie Sanders is the ultimate conviction politician, taking stands of principle that he has long championed.

The first truism is that every dollar that Mr. Sanders raises from small donors for his campaign, and every day he campaigns, and every speech he makes, and every presidential debate he participates in, and every vote he ultimately receives in primaries and caucuses, makes the Democrats more progressive and increases the chances of a Democratic victory in 2016.

The second truism is that the issues at the heart of progressive populism are more popular with voters than the issues at the heart of what is called the conservatism of Republicans today. The more Democrats champion the progressive populist agenda the more votes they will receive from the general electorate, and the greater the voter turnout they will receive from Democratic-friendly voters.

The third truism is a phenomenon that is outside my experience in national politics, which is that the frontrunner candidate (Ms. Clinton) is almost entirely following the philosophical lead of the challenging candidate (Mr. Sanders).

There is no question in my opinion that Hillary Clinton is superbly qualified for the presidency. Her experience as first lady and close confidant to the most popular living former president, and then as United States Senator and Secretary of State, put her at the top of presidential qualification. If she is elected a Hillary Clinton presidency would look very similar to the highly successful and fondly remembered Bill Clinton presidency.

The problem with the Hillary Clinton candidacy, to put it in terms that are brutally blunt, is that she appears to be endlessly engaging in almost hourly political calculations and maneuvers. While Bernie Sanders is the ultimate conviction politician, taking stands of principle that he has long championed and deeply believed in, Hillary Clinton is the ultimate calculating politician, taking stands that shift with political winds which lead to abnormally high levels of public distrust of her.

Mr. Sanders has great appeal to everyone who wants to end corruption and increase the fairness of the financial system and the world economy.

To understand the importance of the Sanders campaign, and the power and appeal of his message, and why it is so important to Democratic success in 2016, consider the following. Mr. Sanders is the most authentic heir to the great Democratic legacy of the New Deal of Franklin Delano Roosevelt, the New Frontier of John F. Kennedy, and the Great Society of Lyndon B. Johnson. His major progressive positions happen to be highly popular with voters and more popular with voters than opposing conservative positions. I would argue that the better Mr. Sanders does in his campaign the more Ms. Clinton follows his lead in taking progressive positions that are both right and popular, and the more the Democrats are identified with these positions the better their chances of prevailing in 2016.

By contrast without the appeal of the Sanders campaign there is every reason to believe, and much evidence to suggest, that Ms. Clinton would “move to the right” and reposition herself yet again in ways that would increase her levels of distrust from voters generally, and depress Democratic turnout on Election Day.

Consider how Mr. Sanders is offering a sweeping platform that makes him the heir to FDR and the New Deal.

The Sanders platform includes raising the minimum wage for all workers to $15 an hour, establishing a single payer healthcare system that would be similar to a Medicare for all program, increasing Social Security payments at a time when there will soon be outrage from seniors who discover they will receive zero cost-of-living increases next year, offering free college education for students at public colleges, and breaking up big banks by restoring the Glass-Steagall Act.

On almost all of these major issues Mr. Sanders first took the strong position, followed by Ms. Clinton who then took her own positions where she moved in ways progressives would generally approve, though often not as far as supporters of Mr. Sanders would wish.

Regarding the environment, Mr. Sanders was unequivocally opposed to the Keystone pipeline from the beginning, unlike Ms. Clinton who first took no position and ultimately followed his lead opposing it.

Regarding protecting workers from losing jobs through unfair foreign trade, Mr. Sanders was unequivocally opposed to the Trans Pacific Partnership from the beginning, unlike Ms. Clinton who first called it the “gold standard” of trade deals and then followed his lead in opposing it.

The full range of reforms championed by Mr. Sanders has great appeal to workers, seniors, students, parents, healthcare consumers and everyone who wants to end corruption and increase the fairness of the financial system and the world economy. These constituencies taken together comprise a wide swath of American voters and offer the potential to create a new form of the New Deal coalition that brought Democrats to power for generations.

Elections are won by the candidates and parties that motivate more of their voters to come to the polls on Election Day. The reason that Democrats were annihilated in the midterm elections in 2010 and 2014 was that conservative voters were super-motivated to vote while many liberal voters became depressed and stayed home.

When Mr. Sanders says that a key to victory for Democrats in the 2016 elections is to expand the electorate by inspiring more citizens to vote for them he is absolutely right.

For these reasons in the close election that is likely in November 2016, no matter who is nominated as their candidate for president the causes championed by Bernie Sanders, and the people he inspires to vote, could save the Democrats by helping them eke out a narrow victory in one of the most important elections in generations. 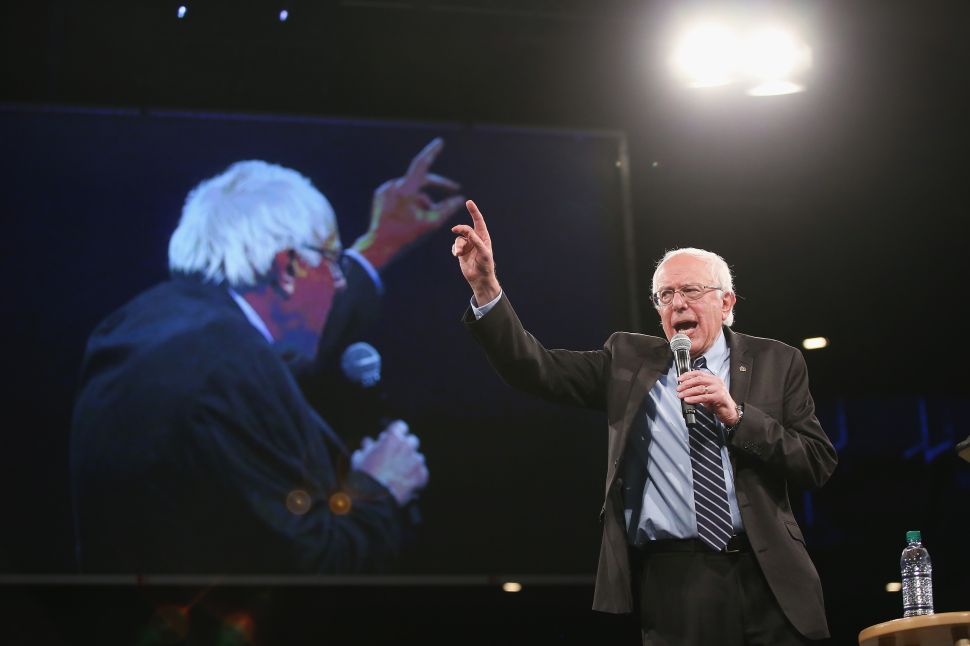