With two of the state’s top politicians facing trial on corruption charges, leaders of four good government groups called on lawmakers to return to Albany for a special session to enact ethics reforms.

“If not now, I’m not sure when,” Dick Dadey, director of Citizens Union, said at a press conference in Foley Square, across the street from where former Assembly Speaker Sheldon Silver is on trial for corruption charges and where former Senate Leader Dean Skelos will go on trial next week.

Mr. Dadey joined forces with leaders of Common Cause New York, Reinvent Albany, and the state’s chapter of the League of Women Voters to say voters were, in Mr. Dadey’s words, “disgusted” with the current system in Albany and that the time was ripe for reforms to how lawmakers are paid, to limit the influence of hidden money donated to politicians through the LLC loophole and spent by politicians in lump-sum appropriations, to give the state’s Joint Commission on Public Ethics, or JCOPE, more power and make it more independent, strengthen financial disclosures and streamline lobbying disclosures.

“Never before in our history have we had two former legislative leaders on trial at the same time for corruption. Never befor has New York received a D- in terms of its integrity index. Never before has its own independent review commission said this is the way we need to strengthen our oversight,” Mr. Dadey said.

The D- grade came from the national Center for Public Integrity, while the suggestions for beefed up oversight came from the State Ethics Review Commission.

Gov. Andrew Cuomo has often noted the state has enacted ethics laws during his tenure that go further than any in history—but Susan Lerner at Common Cause said that’s an indicator of “what a low bar we have here in New York.” She argued that JCOPE didn’t have enough power and that its members were appointed by those they investigate, and that it took the federal government—led by U.S. Attorney Preet Bharara—to prosecute Mr. Silver.

“There are some fairly startling allegations that have been made, that are on trial behind us tomorrow and all the rest of the week against Shelly Silver,” Ms. Lerner said, gesturing to the courthouse. “But we are not seeing a similar inquiry at the state level, and arguably this conduct would seem to violate Section 74 of the Public Officers Law. But our system is set up in such a way that the legislature or the governor is able to step on or stop any investigation that gets too close to them.”

The groups said they hoped the Legislature would address the issue if it reconvenes before the new session in January to appoint the state’s next chief judge.

While the groups all agree that something needs to change regarding outside income—which is at the center of Mr. Silver’s case—they don’t quite agree on what. Mr. Dadey said Citizens Union believes lawmakers, who are technically working part-time, ought to get a pay increase and see their ability to earn outside income limited “significantly.” Ms. Lerner said Common Cause also believes in a “full-time legislature,” with no outside employment and “very significant restrictions on outside income.” The League of Women Voters, meanwhile, has long advocated for citizen legislatures. Reinvent Albany would be willing to see lawmakers get a pay boost—but only if it came with other reforms, executive director John Kaehny said.

“If the Legislature gets a raise and nothing else is done, it’s gonna be a shame,” Mr. Kaehny said. 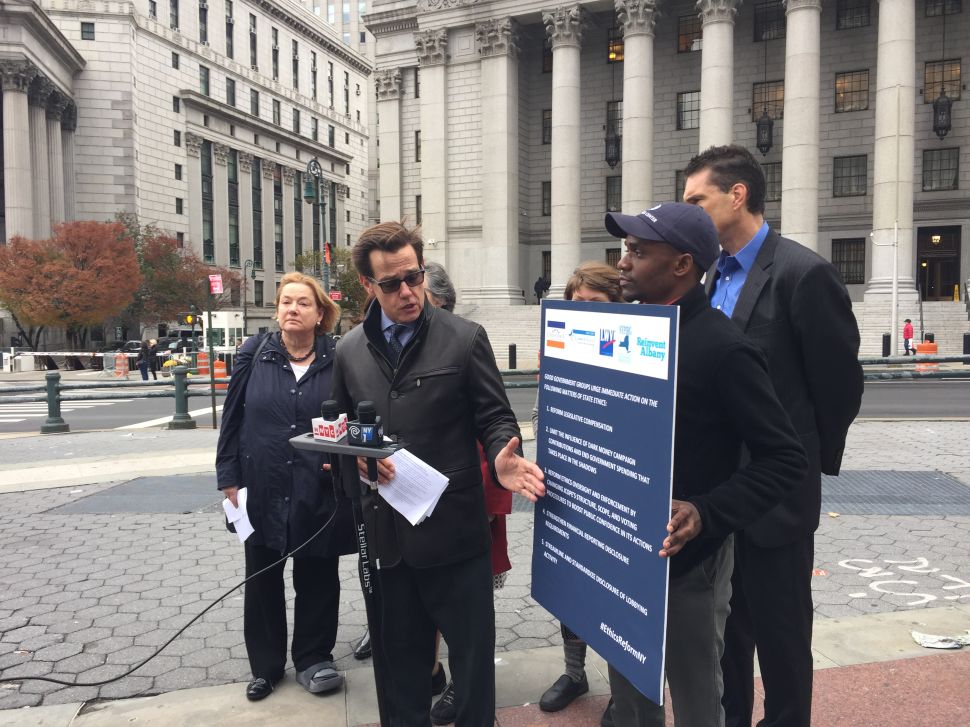