When University of Chicago professor Allan Bloom wrote The Closing of the American Mind almost 30 years ago, he warned how the embrace of moral and cultural relativism was failing democracy and impoverishing the souls of America’s students. We can only shudder at the thought of what he would make of today’s campus madness.

The latest outrage occurred at Dartmouth College. A group of some 150 students dressed all in black and chanting “black lives matter” stormed the Baker-Berry Library where students were studying for exams. They roamed the halls and opened doors to study carrels screaming, “Fuck your white privilege,” “Fuck you, you filthy white fucks!” “Fuck you and your comfort!” “Fuck you, you racist shits.” Then they assaulted a student, pinning her to a wall and shouting “Filthy white bitch!” in her face.

Campuses are compartmentalized into ever more infantile safe spaces; and political diversity is prohibited—in the name of diversity.

What was the school administration’s reaction to such learned discourse (to say nothing about the crime of assault)? A vice-provost apologized—to the protestors. Inge-Lise Ameer told the rampaging disruptors, “I’m very, very sorry that you feel this way. We don’t want you to have this experience here.” Then she counseled them, “There’s a whole conservative world out there that’s not very nice.”

Well, that clears up everything. Later, when media reports focused attention on Ms. Ameer’s comments, she apologized for her remarks about conservatives. But she declined to address concerns that students refused to cooperate with campus security officers investigating violations of Dartmouth’s code of conduct.

That same week—in response to a “national day of action”—a group at Princeton University called the Black Justice League met with university president Christopher Eisgruber. After a lengthy discussion, a number of them refused to leave his office until their demands were met, and occupied Mr. Eisgruber’s office overnight. Specifically, they wanted Woodrow Wilson’s presence on the campus diminished, if not totally expunged.

Before being elected the 28th president of the United States, Mr. Wilson was Princeton’s president, where he is widely credited with invigorating the university’s academic standards and intellectual life, and appointing the first Jewish and Catholic faculty members. A leading progressive of his day—he signed into law bills that created the Federal Reserve, the Federal Trade Commission, and the Clayton Antitrust Act, and appointed the first Jewish justice to the Supreme Court (Louis Brandeis)—he was also a segregationist. Thus the effort to cleanse the campus of any memory of Mr. Wilson.

Slavery and segregation are particularly ugly truths of our national history. And racism certainly lingers in more than a few corners of our nation today. Efforts to reduce prejudice in all its forms are a welcome part of campus life.

But assault, reverse discrimination and intolerance of unpopular ideas are not. There is a difference between protecting free speech and condoning improper and illegal conduct. To us it seems that too many “leaders” are failing to distinguish between these truths.

We remember when real leaders responded with, well, leadership. Rev. Theodore Hesburgh, the president of Notre Dame and the man President Johnson drafted to craft the civil rights reforms, was an opponent of the war in Vietnam. But he was also a supporter of ROTC. When protestors staged a lie-in aimed at keeping students from job interviews with on-campus recruiters from Dow Chemical and the CIA, Father Hesburgh sent a letter to the entire campus community.

In it, he recognized “the validity of protest.” But he also made it clear that anyone who “substituted force for rational persuasion, be it violent or nonviolent,” would be given 15 minutes to meditate. Students who persisted would have their ID’s confiscated and then be “suspended from this community.”

We don’t expect many campus bureaucrats—we mean administrators—to have the moral clarity or backbone of Father Hesburgh. But we do expect better from more of them. 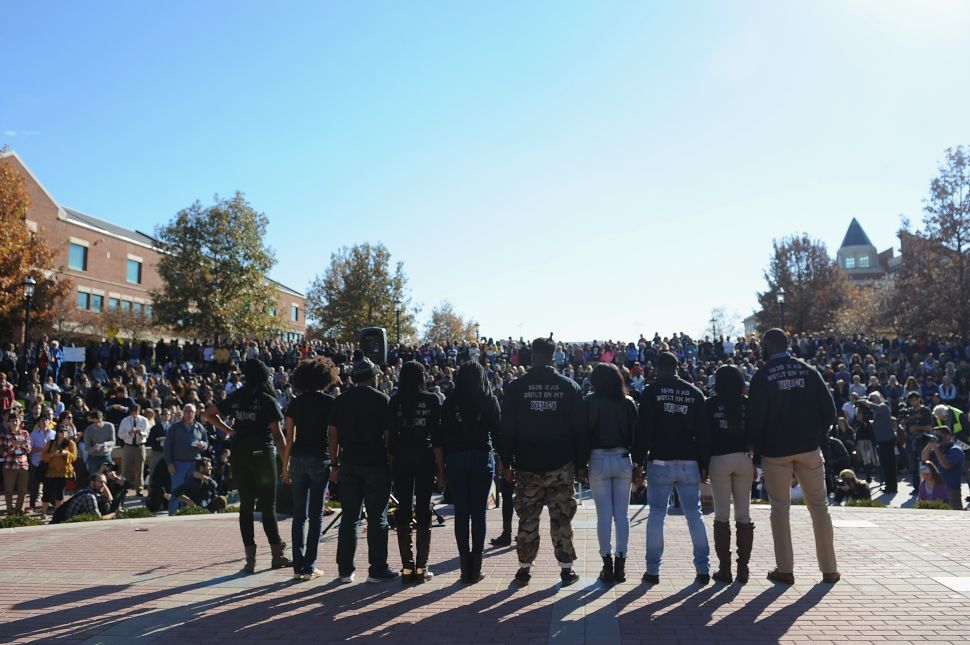