Autumn comes slowly in Manhattan—and then all at once. The leaves turn. Daylight Savings Time cruelly hastens sunset. The Marathon rushes by. And John Pizzarelli and Jessica Molaskey take up residence at the Café Carlyle.

Attending their annual show, which opened last week the Café Carlyle, and runs through November 28, is like donning a comfortable scarf; it eases the harsh passage into winter. Surrounded by adults, you order a martini from one of the bowtie-wearing waiters, many of whom are peers of Elaine Stritch, who lived here for decades, and settle in for 75 minutes of bonhomie, high spirits and astonishing musicality.

Attending their annual show is like donning a comfortable scarf; it eases the harsh passage into winter.

Pizzarelli and Molaskey are a highly experienced husband-and-wife, yin-yang duo: he’s the glib, self-deprecating, relentlessly buoyant guitar virtuouso, with fingers and a voice that float above the rhythm section; she’s the serious, somewhat fragile, introspective singer-actress, who invests each song with a great deal of emotion.

This year’s show—“My Generation”—is more subdued than usual, but is typically brilliant. Devotees of the Great American Songbook, the pair have chosen to focus exclusively on the music of their childhood and adolescence. If you appreciate sophistication, clever wordplay and meaning, Paul Simon, Paul McCartney, Billy Joel and Joni Mitchell can more than hold their own with Cole Porter and Irving Berlin.

From the opening—Pizzarelli singing Paul McCartney’s “Silly Love Songs,” above a slow bossa nova beat—the prevailing mood is a little pensive. Billy Joel’s “Summer Highland Falls,” rendered slowly in a minor key, is less a boast of defiance (“they say that these are not the best of times, but they’re the only times I’ve ever known”) than a rueful reflection on the fact that life produces as much as sadness as euphoria. “Here Comes the Sun,” also in a minor key, is more hopeful than expectant about the prospect of better times.

In Molaskey’s slow, insistent version, “Boy in the Bubble,” Paul Simon’s up-tempo paean to the mysteries of modernity, morphs into an eerily prescient warning about terrorism (“the bomb in the baby carriage/Was wired to the radio”), surveillance (“the way the camera follows us in slo-mo,”) and the dangers of too much connectedness and too much wealth: “These are the days of lasers in the jungle/Lasers in the jungle somewhere/Staccato signals of constant information/a loose affiliation of millionaires/And billionaires…”

What accounts for the air of melancholy? It could be the weather. Or it could be that they’re confronting the cruel reality those of us born in the early and mid-1960s are confronting: we’ve got far more time behind us than we have ahead of us. Musically, and chronologically, Joni Mitchell and John Lennon are as distant from 2015 as the Andrews Sisters and Benny Goodman were when Pizzarelli started plying his trade in the early 1980s. And this year, Pizzarelli and Molaskey had reason to memorialize. Ray Kennedy, the genius pianist who played with Pizzarelli for years, died this spring of complications from multiple sclerosis. They honored his memory with a hard-swinging rendition of “Oscar Night,” Kennedy’s homage to Oscar Peterson.

There were moments of blithe joy, including a duet on Sondheim’s “God Why Don’t You Love Me Blues,” from Follies, and “Twelve Steps to Heaven,” a version of the Miles Davis classic Seven Steps to Heaven set to words. Pizzarelli and Molaskey are experts in creating musical harmony through unison—he scats alongside himself on rollicking solos that threaten to go off the rails, and they often sing the same words together, but an octave apart. But the emotional high points come when Pizzarelli turns over the microphone and the spotlight to Molaskey, whose command is excellent on chestnuts “Send in the Clowns,” and Joni Mitchell’s “Both Sides Now.”

What comes through this collection of songs is the necessity and power of personal connection—to one another, to their audience and to their fellow musicians. (The tight band includes Martin Pizzarelli on bass, Konrad Paszkudzki on piano and Kevin Kanner on drums.) When the omens of winter begin to appear, you huddle together with like-minded people for sustenance, support and warmth. Or as Irving Berlin put it in a 1937 standard written far too early to be included in this show: I’ve got my love to keep me warm. 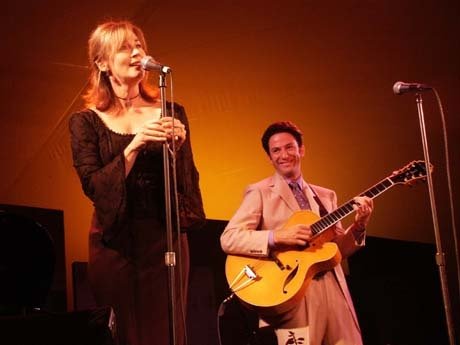