Jeff Koons invites you to get up close and personal with his favorite masterpieces in his new show at Gagosian’s West 21st Street gallery.

The Mona Lisa is present, or at least Mr. Koons’ artistic interpretation of it. There’s Manet’s Olympia, and his Luncheon on the Grass. Rembrandt’s self-portrait, Klimt’s Kiss, Albrecht Altdorfer’s Alexander the Great, and a host of other iconic pictures from the world’s top museums, along with a 1969 Picasso owned by Mr. Koons himself.

The oil-on-canvas renderings of his European artistic family are not intended to be exact copies, the artist stressed at a tour of the show yesterday. They were meant to stand in for the idea of the paintings. “It’s my cultural DNA,” he explained.

Each painting comes with its own blue blown-glass “gazing ball,” balanced on an aluminum shelf affixed to the canvas, that allows a simultaneous exaggerated view of the paintings, the viewer, the room. (It’s Duchampian, noted Mr. Koons.)

The gazing ball, a metaphysical authority since ancient times, activates the paintings and gives them their powers, Mr. Koons added.

They certainly have a powerful effect on the deliberately flatly painted reproductions. The mirrored spheres set off a raucous exchange among the Old Masters and Modernist ones, along with Mr. Koons and the viewer. They refract everything and everyone around them, distorting iconic paintings with a Weegee-esque intensity. With their infinite reflections of El Greco limbs, Titian flesh, van Gogh wheat fields, Monet lilies, and everyone in the galleries, Koons’ gazing balls create an art-history funhouse and art-selfie paradise. Try shooting the work and not appearing in your own photo.

As his selection reveals, Mr. Koons is transfixed by the places lips touch and where bodies express their voluptuousness. Mr. Koons likes to put his gazing balls in intimate places, offering a kind of male-gaze-gone-wild approach to Titian’s naked ladies. But of course it’s all in the guise of his populist art history lesson. He’s at a time when he has “the freedom to make what I would like to make,” he said.

The galleries resound with embraces, from Klimt to Titian to the Picasso in his own collection.

The 1969 painting represents a couple in profile–the artist and his final lover and muse, Jacqueline Roque. “She looks like she’s sucking his brains out,” Mr. Koons said. His own interpretation is tied to Fernande Olivier, Picasso’s first major muse. The woman, he said, “is not sucking his brains out, she’s kissing a baby”—Picasso’s late-in-life reflection of episode when Fernande briefly adopted an orphan decades earlier.

Other works refracted in Mr. Koons’s gazing balls include Géricault’s Raft of the Medusa (whose shipwreck is also reimagined by Frank Stella and Peter Saul in their current shows at the Whitney and Mary Boone), El Greco’s view of Toledo, and Courbet’s notorious Sleep, among other famous female nudes. 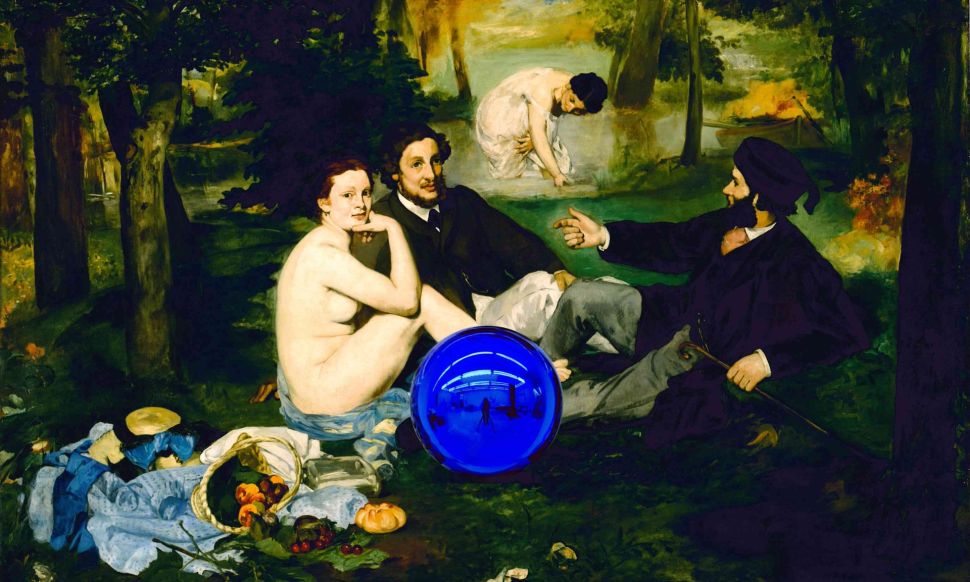