Because the Observer’s own Brady Dale and Vinnie Mancuso were going to skip work today anyway to binge Marvel’s Jessica Jones in its entirety, they decided to review each episode as they go along. First up, episode one: ‘AKA Ladies Night.’

Brady: The opening of Jessica Jones is a little bit painful. First line, “New York may be the city that never sleeps, but it sure does sleep around,” voiced by Krysten Ritter in character as the eponymous Jones. It gets worse as you watch her watch on screen nookie, but the show improves quickly in an exposition heavy first episode. She finishes the case and ends up having to beat the crap out of her client because he’s mad that she found what he hired her to find out.

It does a nice job of setting her up as a bit of a badass who mostly doesn’t give a shit about anyone, but of course that also means that we’re going to eventually have to learn about her carefully hidden vulnerable side.

And that will be gross.

Vinnie: This was one of those weird premiere deals where I was not feeling the first half, and absolutely 100% down by the end of the second. I do appreciate a comic book show that leans further into the dark side than most of the Avengers films, but the only way they could have pushed the idea that Jessica ones is kind of a mess on to us harder is if she looked straight at the camera and said “can you see how much of this nameless alcohol I drank? So much!” But the show found its footing right around the scene with Luke Cage, which isn’t a coincidence, because Luke Cage is immediately the coolest character in the entire MCU.

Brady: I was a big fan of the moment where Jessica goes out to do a stakeout and fills her Klean Kanteen with whiskey.

Melissa Rosenberg is crushing realism in this first episode, in my opinion. At long last we have a show about New Yorkers and lo’ and behold, they actually live in crappy, beat up apartments. Where the paint is chipped. The kitchen is tiny. The refrigerator has seen a few presidential administrations.

As a midwesterner, myself, I also appreciated the touch of the Nebraskan dad who comes with his wife to ask Jones to find their missing daughter. While the mom talks through the case, the dad just can’t handle that the door is hanging badly enough that it won’t lock. So while the ladies talk, he tries to fix it. Trust me, there are a lot of dads from the Great Plains that would do this.

Vinnie: That’s such a good point on the realism, but I don’t think I’ve ever looked up at an apartment building in Manhattan and noticed every single window doesn’t have shades, and someone is doing an elicit activity in front of each one. I get the reason for it, but this makes Jessica Jones’ job as a private investigator really, really easy.

Brady: So what’s up with her and Luke Cage? When we first see him, she’s spying on him from above. She says that there are some cases she can’t let go. So that leads her out to start spying on him. Finally, she walks straight up to the bar, and that’s when Cage asks her to come inside. She asks him why he wants her in there, and he says, “You’re alone. You’re hot. Drinking alone. Tends to attract customers. Don’t do me any favors,” Mike Colter’s Luke Cage says.

He just gets cooler from there. Culminating in a unber-uncool sex scene. That is, it’s way too real. Remember how critical folks used to be because sex in Hollywood was so out-of-kilter with how it actually looks? Right?

Yeah, go back. Please go back.

Vinnie: Well SPOILERSSPOILERSPOILERS (maybe?), in the comics Jones and Cage get married. But that, presumably, is in the future. For now all I want to know is…does Luke Cage have his powers yet? You’d think that not one but two people with superstrength having sex in a shitty New York apartment bed would, at the very least, break the frame.

Brady: What the encounter does result in is Jessica splitting post-coitus, as awkwardly as possible and then yakking on the street. Shortly thereafter, she actually starts making some progress on her case, tracking down Hope from Omaha. Turns out, the young track star has been spending all kinds of money on silly romantic gestures. Jones says, “She’s either an idiot in love or she’s being conned. Which amount to pretty much the same thing.”

It’s a philosophy I can get behind. Surprise, surprise, the cause of Hope’s disappearance is not a cult, like her mother thought. It’s not just any old guy, like her roommate thought. It’s David Tennant’s Kilgrave (The Purple Man!), Jones’s nemesis.

Vinnie: Something that was really cool, and something I recommend going back to look for once you’ve finished an episode, is how often the show subtly stuck the color purple into the background of a scene. When Jessica is talking to Trish on the balcony, for like a second the sky behind her is purple. Right before she closes her apartment door for seemingly the last time, the lighting is low-key purple. Now, the only thing left to do is wait with bated breath to see if Marvel pulls the trigger and dumps approximately six gallons of purple paint onto David Tennant, so we can get the real Purple Man.

Speaking of pulling the trigger, this show got daaaaaaark real quick. Hope, still under Kilgrave’s control, murders her own lovely Midwestern parents in an elevator. And then, then, snaps out of it and wails after she realizes what she’s done.

Kind of makes anything Ultron did in two and a half hours of screen time look silly. 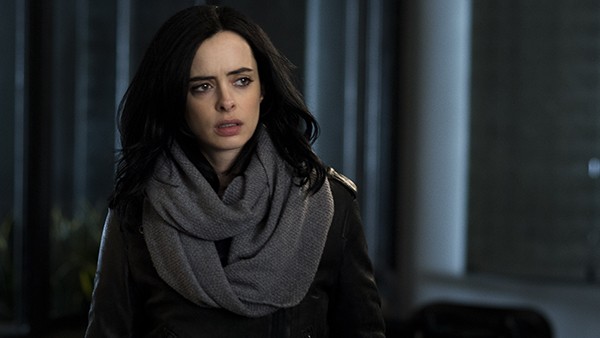