Thanks to an ad campaign for a new Amazon TV series, symbols from Nazi Germany and Imperial Japan have popped up on Manhattan subway cars—infuriating one Orthodox Jewish lawmaker, who urged everyone to boycott the Internet giant.

Assemblyman Dov Hikind, a Brooklyn Democrat and the child of Holocaust survivors, called the ads “incredibly offensive” and “disgusting.”

“This PR campaign by Amazon is incredibly offensive and insensitive. Amazon knows exactly what they are doing,” Mr. Hikind said in a statement. “The pain they are causing by plastering the subway with Nazi regalia is disgusting.”

As the holiday season approaches, Mr. Hikind urged “everyone to spend their money elsewhere—don’t buy from Amazon. Buy whatever you want, but at least once this season, say no to Amazon. Make them your last choice.”

After the publication of this story, Mayor Bill de Blasio also slammed the ads in a statement. “While these ads technically may be within MTA guidelines, they’re irresponsible and offensive to World War II and Holocaust survivors, their families, and countless other New Yorkers. Amazon should take them down,” he said.

The ads are for the series The Man in the High Castle, based on the acclaimed 1962 novel by Philip K. Dick. The book and show are set in an alternative world where the Axis Powers have won World War II, leading to a world-conquering Nazi regime and Japanese empire occupying the United States of America.

The subways ads showed up on the Times Square shuttle, according to a photograph shared by the website Gothamist. One row of seats is covered with American flags, the stars substituted with the Nazi Reichsadler or imperial eagle. An adjacent row is painted with the Rising Sun flag, the symbol of Imperial Japan.

Adam Lisberg, a spokesman for the Metropolitan Transportation Authority, said the ads met the “content-neutral” standards the authority must adhere to.

“We determined these ads do not violate any of those standards, and thus we had no grounds to reject them,” he said in a statement. “Unlike the New York Observer‎, the MTA is a government authority and can’t pick and choose which ads to run based on whether we like them or not; we have to go by the content-neutral standards our board approved.”

Amazon did not immediately return a request for comment. 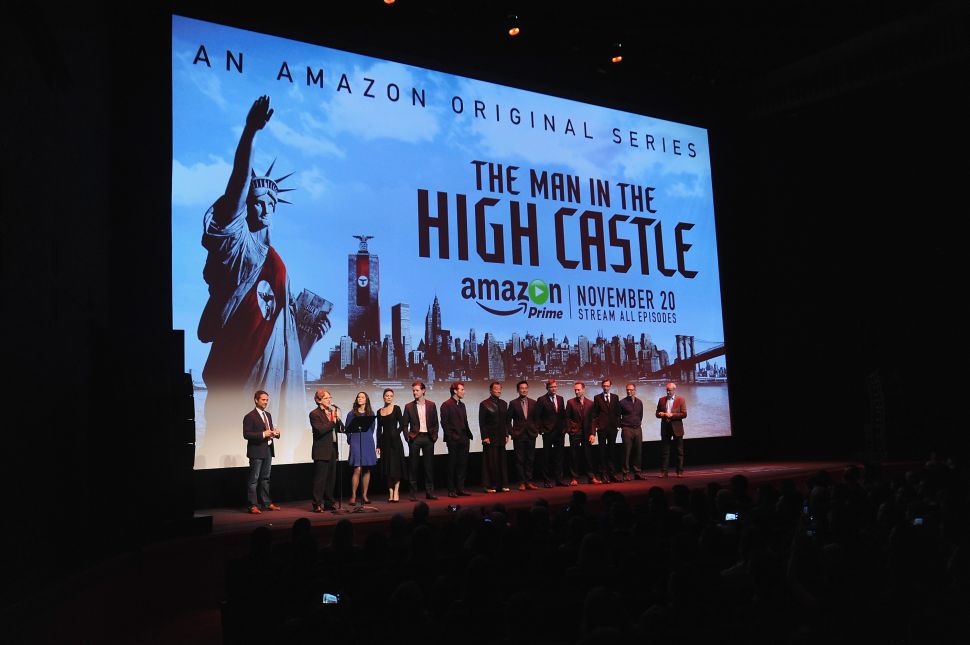