But on last night’s show, Mr. Oliver proved that his knowledge of social networks goes far beyond Twitter.

As part of a segment about how pennies have basically become worthless, Mr. Oliver talked about the many ways people waste the little brown coins, such as by throwing them in the garbage.

Another one of the British funnyman’s arguments against the penny was an old Reddit thread called “I put a penny in my butt and now I can’t get it out.”

User Penny_4_Ur_Thoughts began the newly unearthed thread on June 30, 2011. He wrote that he put the penny in the fridge for a few hours before inserting it, and asked for tips about removing the Lincoln log.

Of course, the thread devolved into a whole bunch of dirty coin puns. Here’s a sampling:

Sadly the thread is now archived, so people who heard about it from watching Last Week Tonight can’t post new penny butt jokes. 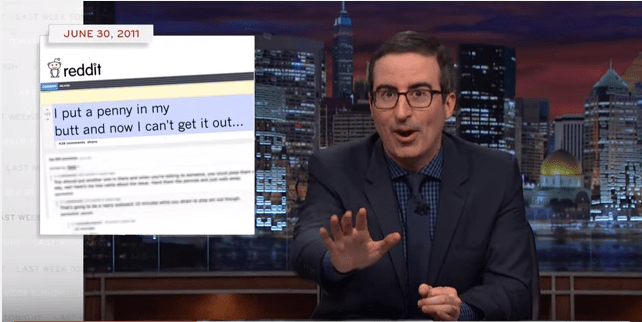