Paul Ryan didn’t need to attend that meeting Sunday night with all those Republicans fretting and venting about the format and the moderators and the questions of their entertaining but mostly inconsequential Presidential debates.

Mr. Ryan didn’t have to send representatives to plot with those speaking on behalf of Donald Trump, Ben Carson, Ted Cruz, Marco Rubio, Chris Christie, Jeb Bush and the half-dozen or so other Republicans who hope to replace President Barack Obama in next November’s election.

Mr. Ryan, Mitt Romney’s vice-presidential hopeful on the losing ticket to Mr. Obama in 2012, was crowned Speaker of the House last week, blessed by friend and foe alike, praised by the media and Democrats, too. Everyone begged him to take the place of John Boehner, who quit. So Mr. Ryan is now quite above and removed from this current Presidential fray.

On Friday, he spent the start of his political honeymoon recording interviews for the Sunday shows of CBS, NBC, ABC, MSNBC, CNN and Fox. Presumably, he spent the rest of the weekend back in Wisconsin for Halloween and family time.

After all, as Mr. Ryan told Chuck Todd on NBC’s Meet the Press on Sunday, he’s just a regular American dad who likes “volleyball, basketball, Cub Scouts and church” with the family. Mr. Todd tried to get Mr. Ryan to voice a Presidential preference.

It was messy. It was ugly. But democracy produced the best result in Paul Ryan, a young, visionary leader for the Republican Party.

“I’m going to be completely neutral in this election because I’m the Speaker of the House,” Mr. Ryan said. “But if you’re asking me ‘Can any one of those people on the stage be a better president than Hillary Clinton?’ The answer is ‘Yes.’”

Mr. Boehner of Ohio was driven into a surprisingly sudden retirement by radical right-wingers in his party who would rather shut down the government and throw tantrums than deal with Democrats, especially Mr. Obama.

Mr. Boehner told Dana Bash on CNN’s State of the Union how he persuaded Mr. Ryan to take the job.

“I laid every ounce of Catholic guilt I could on him,” Mr. Boehner said, adding that he told Mr. Ryan: “This is what God wants you to do.”

Sarah Fagen of CNBC, a Republican panelist on ABC’s This Week, said of the Speaker transition: “It was messy. It was ugly at times. But democracy produced the best result in Paul Ryan, a young, visionary leader for the Republican Party.”

On Face the Nation on CBS, Peggy Noonan swooned over Ryan, whose name, wouldn’t you know, sounds almost like “Reagan.”

“It’s nice to see quality rise,” said Ms. Noonan, a speechwriter for President Ronald Reagan. “This is a serious man who knows his brief. An earnest politician and not a sleazeball and a slob.”

(Too bad polite host John Dickerson didn’t ask, “Exactly, Peggy, who are the sleazeballs and slobs?”)

You have to raise your gaze to the horizon. We have been too timid on vision. We have none.

Later in the show, Helene Cooper of The New York Times said of Ryan: “He’s going to have a honeymoon period and he’s going to be right back in the thick of it with the ‘Freedom Caucus.'”

That caucus, formerly known as the Tea Party, consists of about 40 Republican extremists who drove Mr. Boehner into retirement.

Of all the interviewers, the only one who asked the key question to Mr. Ryan was John Roberts, substituting for Chris Wallace on Fox News Sunday.

Mr. Hastert was alleged to have used it to pay hush money to cover up a sexual relationship with a boy in his past and of lying to the FBI.

According to the Hastert Rule, the entire House can’t vote on a bill unless most Republicans approve it first.

By ignoring the Hastert rule—which is not yet in the Constitution—Mr. Ryan could conceivably limit the negative power of the Freedom Caucus and do deals with President Obama and with coalitions from both parties in ways that might make most of them look good during the Congressional session this fall and the first part of the election year.

Such dealing could enhance Mr. Obama’s legacy while showing off the leadership skills of Mr. Ryan. He could look especially leader-like if Mr. Trump and Mr. Carson and other hopefuls are still squabbling over the nomination in a few months.

Why, shucks, Mr. Ryan—with all that vice-presidential campaign experience—might even look like a compromise Presidential candidate, one who could be reluctantly drafted to serve his party and his nation, just as he was for the Speaker’s seat.

Mr. Ryan chose to duck the question about the Hastert Rule, but dropped a hint.

“There are always exceptions to the rules,” Mr. Ryan told Mr. Roberts. “And, when circumstances dictate, we have to look at all options available.”

Mr. Ryan, a devotee of the crackpot novelist Ayn Rand and a physical fitness fanatic, is said to be a realistic and fair negotiator. He said he would not put up with Mr. Boehner’s travails. He hinted to Mr. Roberts his optimistic ideals.

“You have to raise your gaze to the horizon,” Mr. Ryan said of his party. “We have been too timid on vision. We have none.”

SUNDAY PUNCHES
Liz Cheney, daughter of the former vice-president, did a verbal war dance on Fox News Sunday, insisting the United States military should fight ISIS and take back land held by the terrorists in Iraq and Syria. George Will, next to her, sniffed his dismissal. “We, as the United States of America, are not going to take that land back,” he said. When Ms. Cheney persisted, Mr. Will concluded: “The Devil’s in the details. So is defeat.”

Also on Fox, candidate Carly Fiorina didn’t think it funny to hear the women on The View joking and laughing about a “Carly Fiorina Smile Mask” for Halloween. Her face has been an issue since Donald Trump insulted it. “Let’s see if they have the courage to say it to my face,” she said. “Frankly, I am tired of being insulted by liberal feminists.”

On CNN’s State of the Union, Senator Ted Cruz of Texas said, “If you have never voted for a Republican primary in your life, you don’t get to moderate a Republican Party debate.”

A funny moment on same show came when Ohio Governor John Kasich had trouble hearing interview questions from sub hostess Dana Bash. Not realizing he was still on camera and still on microphone, he ripped off his ear plug and said, “I don’t know what the heck happened!”

CNN heavily plugged a documentary about the 2000 election, scheduled for Monday at 9 p.m. George W. Bush was the winner over Al Gore after a Supreme Court decision over contested Florida ballots, back when Jeb Bush was governor. One of George W. Bush’s aides, Mac Stipanovich, was shown in a clip saying, “We were going to hold Florida unless they sent in Federal troops.”

NBC’s Jeb Bush feature used the slogan “Jeb!=Jeb?” on the bottom of the screen. Speaking on the same show about his family, Mr. Bush said of his father, “I’d kill for him. I’d go to prison.” He didn’t mention his brother.

David Brooks of The New York Times told Mr. Todd’s panel that Mr. Bush’s “300 years of WASP history have trained him to be a gentleman,” and this puts him at a disadvantage in the current brawl.

On CNN’s Fareed Zakaria, GPS, scientist Richard Dawkins discussed how Mr. Carson and several other Republican candidates profess a disbelief in Darwin’s theory of evolution. “This fills me with despair,” Mr. Dawkins said. “This is not something you believe in or not. This is a fact.” 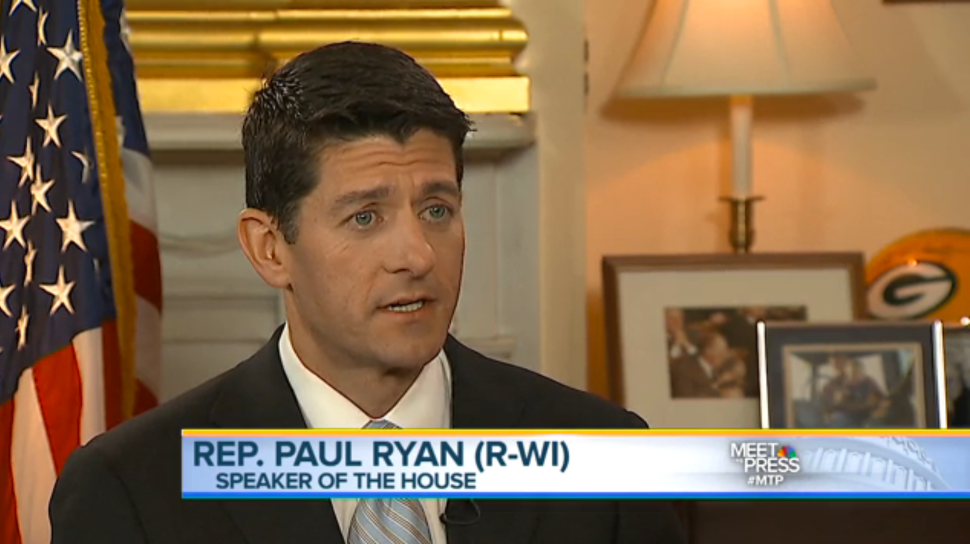