Movie actress Keira Knightley, best known for her roles in film adaptations of stodgy costume epics (Pride and Prejudice, Anna Karenina), was such a breath of fresh air when she helped crack the Nazis’ secret World War II Enigma code in the terrific Imitation Game that I was hoping for more contemporary roles. Instead, she has chosen to make her Broadway stage debut in a perversely stagnant and relentlessly boring stage version of the ossified 1867 Émile Zola melodrama Thérèse Raquin. Translated numerous times from the original French in plays, films, television soaps and even a real opera—never with any commercial success—this old warhorse doesn’t make a very solid argument for the risky revival currently onstage at Studio 54 as part of the Roundabout Theatre Company’s 50th New York season, and I’m sorry to add that nothing remotely beneficial has been added by Ms. Knightley’s appearance in the title role. Color it drab.

Zola’s sordid novel of adultery and murder occasionally turns up as a curious required-reading assignment in some 19th-century literature classes, but it’s high time it was permanently put to rest. It’s the tedious tale of Thérèse, an unhappy orphan forcibly married off to her first cousin Camille—a man she doesn’t love and can barely tolerate—by her domineering aunt. Frail, irritable and subject to colds and fevers, the sickly Camille (Gabriel Ebert) and his bossy, interfering mother (Judith Light) move Thérèse from the provinces to an atelier in Paris where she works in a humble haberdashery, spending her days sewing and serving, with no hope for escape. Until, that is, she meets the dashing, fiery Laurent (Matt Ryan), a painter with a musky sex appeal that works like animal allure on the pitiful, repressed girl. Immediately smitten, Thérèse and Laurent begin a torrid affair, but it is only a matter of time before the novelty of their passion cools and they crave more. Eliminating Camille, the obstacle to their happiness, becomes an obsession and Act One ends when they drown him in the Seine.

Act Two begins in a cemetery, and for the rest of the play everyone wears black, which matches the ugly sets by Beowulf Boritt, the hideous period rags by Jane Greenwood poor Ms. Knightley is forced to wear and even the furniture. For the next hour, the joy of temporary freedom turns into the misery and pain of guilt, remorse and shame as the ghost of the murdered Camille returns to drive the aunt to a stroke and the lovers to insanity and suicide.

James M. Cain covered all this sturm und drang much better, almost a century later. He called it The Postman Always Rings Twice. While the actors work hard to bring their characters to life, the adaptation by Helen Edmundson is so cold that you don’t feel an iota of compassion for any of them. Without movie makeup and elaborate hairdos, Ms. Knightley fares the worst from the ennui. She appears to have been directed (by Evan Cabnet) to move catatonically. Like other movie stars who try the stage prematurely, she seems uncomfortable; her movements are stiff and she demonstrates a stunning uncertainty about how to project her voice beyond the third row. She’s the human equivalent of a gunnysack.

The subject of time is mentioned several times—how time heals everything. Let’s hope time can heal anyone unfortunate enough to suffer through an ordeal called Thérèse Raquin. 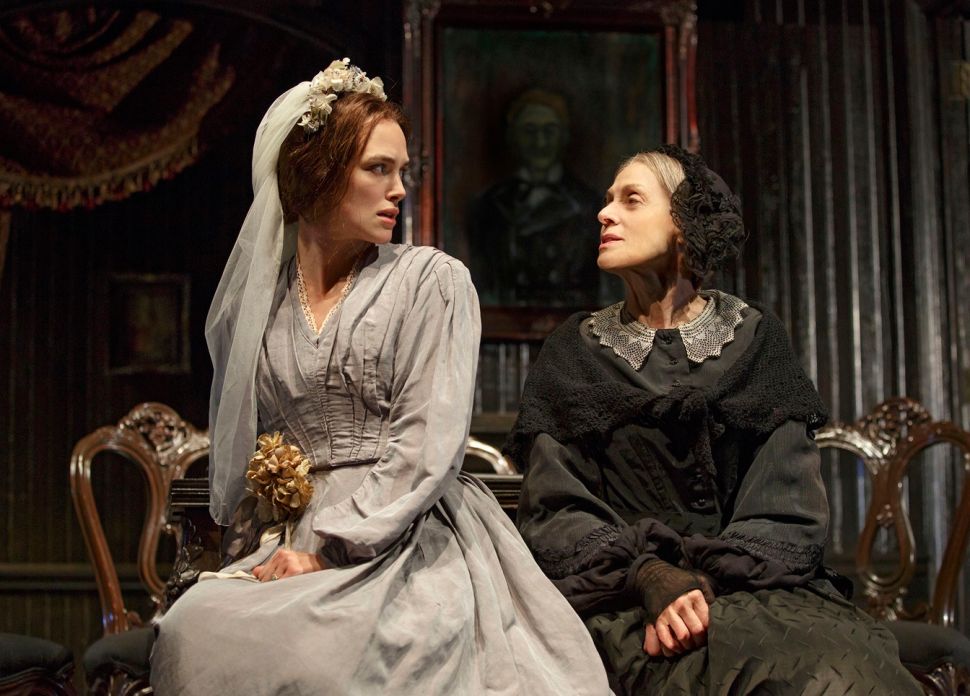