If a company can be said to be relieved, and giddy, Sotheby’s was last night.

The auction house topped its $254 million low estimate for its evening sale of Contemporary art with a solid $294.85 million take, with some big sales narrowly squeaking just above the reserve, in what could be described as an impressive bout of estimating by the Sotheby’s specialists (good show!).

The softness in spots seemed like less a market correction than “business as usual” as lots seemed to get what they deserve.

Only two records were set, but one was big: the over $70.5 million dollar payday for a beatific Cy Twombly chalkboard painting titled Untitled (New York City) from 1968, that went to an anonymous phone bidder. The other record was much smaller but significant, as Mike Kelley’s Memory Ware Flat #29 took home a tidy $3.07 million over its $2 million high estimate, proving that the Los Angeles artist has a certain talent for wooing bidders.

An Ai Weiwei Zodiac Head, Dragon, 2010, from his “Circle of Animals” series soared, rising to $490,000, including commission, against an estimate that topped out at $350,000. Larry Warsh, one of the world’s earliest and leading collectors of Chinese Contemporary art, and who produced the acclaimed documentary about the political dissident artist, Never Sorry, said of the results: “I was very pleased to see Ai Weiwei among his contemporaries—and pleased that the market reacted in such a positive way.”

Sotheby’s 82 percent sold auction was not far off from Christie’s 80 percent sale the night before, but restuls for the uptown auctioneer’s equally safe blue-chippy shopping list (the only real under-age-50 artists of note in a “Contemporary” sale were Joe Bradley—again—and Nate Lowman) had a better feel.

After the sale, the staff of the Contemporary art department gathered in the press conference to applaud and congratulate. There was actual hopping with joy, indicating some close calls.

The stunning Number 17 by Jackson Pollock for instance, did okay at nearly $23 million, between its $20 to $30 million estimate, as did the Lucio Fontana Concetto Spaziale, Attest from 1965, which took in a cool $16.15 million that crossed into its $15 to $20 million estimate, but only with the aid of the house’s commission.

Even a muddy-looking Francis Bacon titled Portrait from 1962 did well enough with a $16.7 million haul, including commission (against a high estimate of $18 million.) Meanwhile, smaller lots like the handsome Agnes Martin Untitled #7, sold for $3.1 hammer price (right in between its $2.5 $3.5 million estimate).

Billionaire Steven A. Cohen’s Mao painting by Andy Warhol (it had also been owned by François Pinault) had a fine night as well, totaling over $47.5 million for the financier.

Two-thirds of the way through, bidders started to file out like Los Angeles Dodgers fans hoping to beat the traffic back home, but things stayed interesting thanks to a—for lack of a better word—“beguiling” painting by Jean Michel Basquiat titled Masonic Lodge from 1983, which started a bidding war between six collectors (another Basquiat in the sale, Hannibal, which had been involved in a seizure related to money-laundering, bought in).

Masonic Lodge, the fifth-to-the-last lot, garnered $5.07 million by the end, and all the Sotheby’s brethren—from the interns to new papa CEO Tad Smith himself—let out guffaws of delight.

Afterward, while the press conference was proclaiming that the day had been more-or-less seized, the sale was actually just a parade of usual suspects—Warhol, Basquiat, Fontana, Stella and Bacon—doing what they seemingly always do; make people money. And it almost seems like the houses have it down to a science. 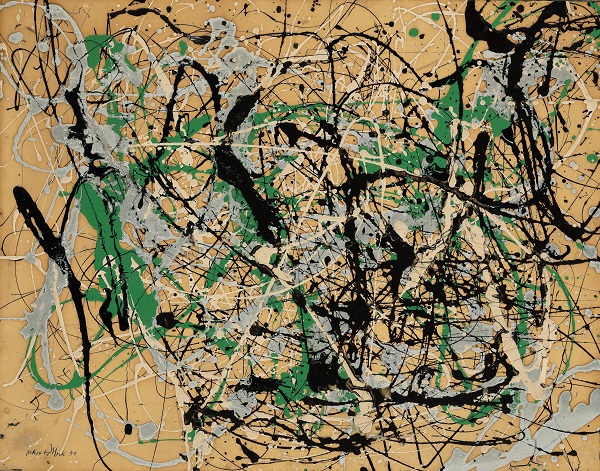