“Webcomics are dead. Right? That’s not a bad thing,” Dorothy Gambrell, Cat and Girl‘s creator, told the Observer in an email. “Comics are doing great. The little arbitrary wall that was built around ‘things on the Internet’ is just gone.”

Starting out as artists and turning into entrepreneurs, the creators we spoke to that found a way to connect with the public through comics posted on the Internet for free developed a perspective that other webcomic aspirants and creative businesspeople may find helpful. Our conversation about the webcomics business in 2015 started on Monday and concludes here.

“A webcomic is less about a comic and more about an entertainment website philosophy,” David Malki, Wondermark‘s creator and staff at Topatoco, told the Observer in a phone call. Mr. Malki takes pride in starting with his comic, but learning to make all sorts of products that share Wondermark’s sensibility without necessarily sharing its branding (for example, this iPhone or Samsung case).

Once a creator starts to earn appreciable income from their artistic output, it raises profound questions about what their work means and what money means. Here’s some perspective from how some of these webcomic makers have walked that line.

“We’ve turned down many opportunities to do something that’d potentially bring us ‘real’ money because we felt it would harm the brand, the philosophy of C&H. Our time is very valuable, and we want to spend that time making things we really love,” Dave McElfatrick, one of the creators of Cyanide and Happiness, told the Observer in an email via a spokesperson.

“My business is the art of balancing the need to make money with the desire to create,” Scary Go Round‘s John Allison wrote. He has recently expanded his work into comics, writing an ongoing title for Boom which is based on some past story arcs from his site, illustrated by other artists.

As he told us in our last installment in this series, bringing in new readers to his site has become tougher as Facebook sucks up all the air online. He added, “But careers are not all up, up, up; do good work, continue to grow as an artist and opportunity finds you. I have no sour grapes.”

As many in the business look for new frontiers for their unique perspectives, Toothpaste for Dinner‘s Drew Fairweather captures the relief many in the industry must feel when second or third ventures also strike a chord. “I love making comics still, of course, and I keep them interesting and contemporary,” he wrote the Observer in an email, “but to start something fresh without having to connect it to 10 prior years’ worth of existing work is creatively fulfilling.” Lately, he’s been emphasizing his blog, The Worst Things for Sale.

‘Do good work, continue to grow as an artist and opportunity finds you.’

While Mr. Malki told us that standing still, even if you started out an innovator, has its own dangers. “I am always afraid I’ll be the print cartoonist in 20 years,” he said.

“I’ve never been the ‘Flavor of the Month;’ sometimes I envy younger creators getting huge quick boosts thanks to the wildfire nature of contemporary Internet fan culture,” Dylan Meconis, a writer for the comic PvP and creator of Family Man, wrote in an email, via a spokesperson, “but ultimately it’s been a gift to have the time and space to decide what kind of a creator I want to be and what kind of audience I’m interested in cultivating.” Her current title is her second online graphic novel, which was preceded by Bite Me!

“It’s a dream to be able to make cartoons for a living,” Mr. McElfatrick wrote. “I don’t think any of us would trade it in for anything.”

Our conversations with webcomics’ top creators seemed to show that the open web doesn’t present the same opportunities that it once did for this breed of visual narrative. The next generation of artists may need to look elsewhere to stand out.

Who knows how to find it, but whatever space someone points to and says comics couldn’t possibly make money there, that might be a good place to try. 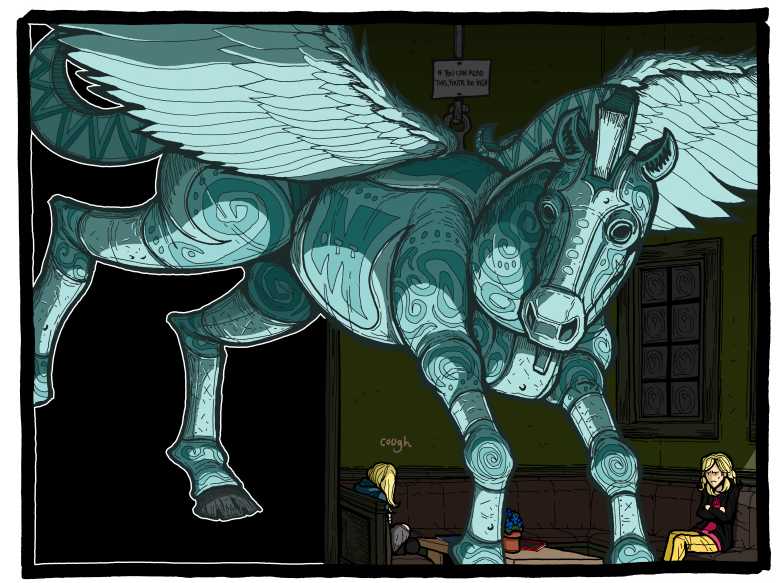