Reaffirming his unapologetically hawkish foreign policy vision, Sen. Lindsey Graham of South Carolina said tonight his goal as president would be to kill as many Islamic State “bastards” as he “could find.”

Mr. Graham, addressing the Metropolitan Republican Club on the Upper East Side, was his typical freewheeling self, intermingling off color humor and plenty of foul language in a brief speech and longer question-and-answer session.

“We are where we are. I can’t help it the world is so screwed up. I don’t know why these guys are so batshit crazy,” Mr. Graham said, referring to ISIS. “I don’t know why Hitler wanted to kill all the Jews but he did.”

“Radical Islam cannot be accommodated anymore than Hitler was,” he argued. “The difference is, at least [British Prime Minister] Neville Chamberlain could say he was lied to.”

Mr. Graham said his top priority as president would be to “put radical Islam in the box and nail it shut.” Following the Paris terrorist attacks last week, which ISIS took credit for, Mr. Graham asserted there was an election “before Paris” and “after Paris,” and claimed he was the only candidate with the right policy chops and experience to sit in the White House.

He promised, before the Republican club and in an interview with the Observer afterwards, that the presidential race’s renewed focus on foreign affairs would be to his benefit.

“I think my chances of rising have gone up dramatically because foreign policy and national security are more important, not less,” he said in an interview.

Mr. Graham, whose standing in the polls was so low he was dropped from the undercard of the latest Republican debate, said Islam needed to undergo a reformation like Christianity did centuries ago. He repeated his call for American troops to go into the Middle East to fight ISIS, though he added nonviolent means, like building infrastructure and bolstering schools in the region, could give more Muslims hope and keep them from radicalizing.

“I choose to side with the young people. I choose to help those in the faith who must destroy radical Islam,” he said.

“How did [the Germans] become Nazis? It can happen anywhere. So I’m tired of this relgious stuff. There’s nothing going on in Islam that hasn’t gone on in Christianity,” he added. “About 500 years ago.”

He chided President Barack Obama and Hillary Clinton, the former secretary of state and Democratic front-runner, for allowing chaos to consume the Middle East and give rise to ISIS. He called the current secretary of state, John Kerry, a “bulldozer” for all the harm he said he had done.

“I can beat Hillary Clinton,” Mr. Graham said, noting he led the impeachment of her husband, former President Bill Clinton. “It’s easer to kill a vampire than it is to kill a Clinton politically but she’s not as talented as Bill.” 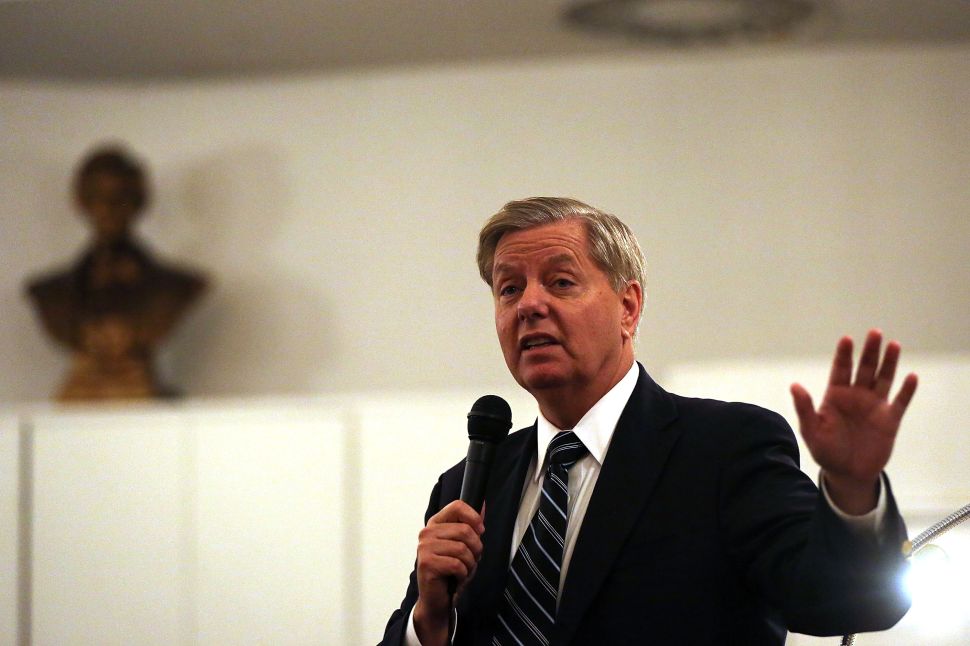