The first time I tried to eat at Avant Garden, Ravi DeRossi’s new vegan restaurant in the East Village, there was no one there and a sign hung on the door: “Closed for employee appreciation day.” Strange, I thought, but hell, if you gotta close, that’s a better reason than most. So I headed a few blocks north to Brooks Headley’s Superiority Burger and ate some charred broccoli salad in the park after dark. The next time I tried to eat at Avant Garden, a few days later, the problem was the opposite. It was 10 p.m. on a Thursday night and the 28-seat space was still nearly full. Four of the 12 stools were free at the bar but non-consecutively. We were a party of three so the chairs were like grapes to Tantalus. The restaurant didn’t close for an hour’s time but the hostess told us it was no use waiting. We three went to Rosie’s and ate carnitas out of spite.

The third time I showed up I was waiting for the punchline. I was ready to hate Avant Garden, not simply for the unexpected closure or the sting of rejection but for its #dadjoke name; or for the fact that Mr. DeRossi—a 40-year-old New Yorker-slash-Boulderian who has built a small empire of bars such as Death & Company and Mayahuel plus restaurants like Bergen Hill—referred to it as a “passion project,” a designation that should be anathema in restaurants because if you are not passionate about a project you have no business having one; not even just for the text on the website that, under the heading of “Mission,” read in part, “While it may not seem a revolutionary act to simply enjoy a meal in a restaurant, the elimination of animal flesh and animal byproducts in one’s diet not only eases or eliminates an animal’s suffering, it’s also the most effective way an average person can ease the unmitigated environmental disaster that we as a species are collective creating.” Christ, I thought. More self-serious vegan nonsense. Truthy nonsense, of course, but nonsense nevertheless.

When I arrived it was 5:20 pm and a shit show seemed to be brewing. 20 minutes after opening, a photographer was still scrambling to get shots for the restaurant’s website. The storefront looked like a storage room with a few tables. Once a pet store and most recently another vegan restaurant on East 7th Street, the walls are lined with wine bottles, cardboard boxes, pots and pans. What wait staff there were milled about, more wait than staff. I drew up a seat at the bar, the lone customer.

The bar is wide and made, seemingly, of brownish marble. It’s gaudy, Trump-like, and functions not only as a surface for service but for the mise en place of the three chefs who stand behind it. (Later I find out it is a huge slab of petrified wood, which led to a complete retroactive reversal of opinion.) Unlike most open kitchens, where diner and chef are on opposite sides of a pass, at Avant Garden there are simply a few candles and vases separating the two sides. The menu is split into three sections: toast, hot and cold. But the lack of parallel organizational structure—toast, for instance, can be hot—and the punctuation of the individual dishes fails to inspire confidence: “Carrot Harissa. Apple. Whipped Tofu. Tarragon.” That $12 entrée has more periods than a day at junior high. What it needs are commas.

So I was not inclined toward good cheer. But then that toast arrives, or rather, the process of the toast building commences. A cook named Jack, who looks a lot like Penn Badgley, grabs a slice from a tub full of Balthazar bread and throws it on the press. Plastic containers emerge from beneath the bar and are stacked into mini skyscrapers. Each container is filled with some carrot-like permutation: an orange one, a purple one, an umber one. Jack handles squeeze bottles full of whipped tofu and tarragon oil like a croupier. He makes small talk. It wasn’t employee appreciation day, he tells you, just the installation of the hood. Somehow that makes you feel better, like Avant Garden isn’t so do-goodery after all.

The Strokes are playing on the stereo. By the time the carrot toast is pushed your way, an appreciation of Avant Garden begins to blossom. The carrot butter really does feel buttery, and, because it’s been folded in with harissa, is spicy too.  The baby carrots have been roasted in orange juice, something called “Andrew spice”—a signature mix of Avant Garden’s talented chef, Andrew D’Ambrosi—then glazed with agave syrup. There are purple baby carrots too, which have been pickled. Mr. D’Ambrosi takes a cubist approach to his product, revealing the essential carrotness of a carrot by highlighting the vegetable through multiple techniques. It’s a classic approach but one that in lesser hands comes off as pretentious or disjointed. Here, it’s vegetal Duchamp. Sweetly roasted, tartly pickled, spicily buttered, the carrot’s potential is realized.

As for the cold courses—of which there are four—one wishes at least one, the kale panzanella salad ($12), was warm instead. Mr. D’Ambrosi dresses the softened leaves in sherry vinaigrette overnight. He smartly adds warm toasted chunks of that Balthazar bread (happiness is a warm crouton). But when served chilled, the kale veers dangerously into funky nori territory, reinforced by the salinity of Niçoise olives. Another offering from this section—which Jack called a mushroom ceviche—is a mound of marinated king oyster mushroom, shaved on a deli slicer and accompanied by jalapeno, frisée and a white ponzu. Though all the flavors are there, it’s too much mushroom, too thinly sliced and too wet. The result is watery, domestic when it could have been wowee, zowee. Happily, the mushroom tofu purée that lurks underneath begins to point at Mr. D’Ambrosi’s gift for turning things like tofu or garlic or carrot into better versions of butter, cream and milk.

It’s in the hot section—the third round—that Avant Garden really scores.  Doubling down on mushrooms, Mr. D’Ambrosi goes ham with oysters and maitakes ($18) presenting a dish as meaty as any you’ll find at a Peter Luger but as delicate as anything from Dan Kluger. As he did with the carrots, Mr. D’Ambrosi manifests his mushrooms in manifold manipulations until the mushroomness mushrooms. He fortifies his oysters with spiced brine and unleashes the umami of the maitake into something just ferocious. They might not eat your children but your children will eat them. He trebles the fungi with a button mushroom purée smeared on the plate in a graceful browncurve and then quadruples that with the addition of pickled hon shumejis, those cute plucky micro-penises nestled in this vast mushroom jungle. Man, it’s fungal and Jack’s a fun guy and the dish makes vegan viable because first it has to be try-able then desirable, which this is.

But the knockout punch is the farro risotto ($17), with fall flavors going loco, flavortown express going local: baked apple and maple syrup, ’cause YOLO. Fuck the butter and the cheese—he uses garlic confit. But he adds sage pesto, and presto change-o. Now you’re sitting by the fire, playing Jenga, you know how the rest go: Getting filthy on the fur rug. It’s faux though. And even more so: Vegans are preachy but rarely compelling, too often it’s morals not flavor they’re selling. At Avant Garden, they go really hard on the taste but take it easy on sermons; turnt up on the flavors like a veggie Baz Luhrmann. Any residual righteousness is just a cherry on top. 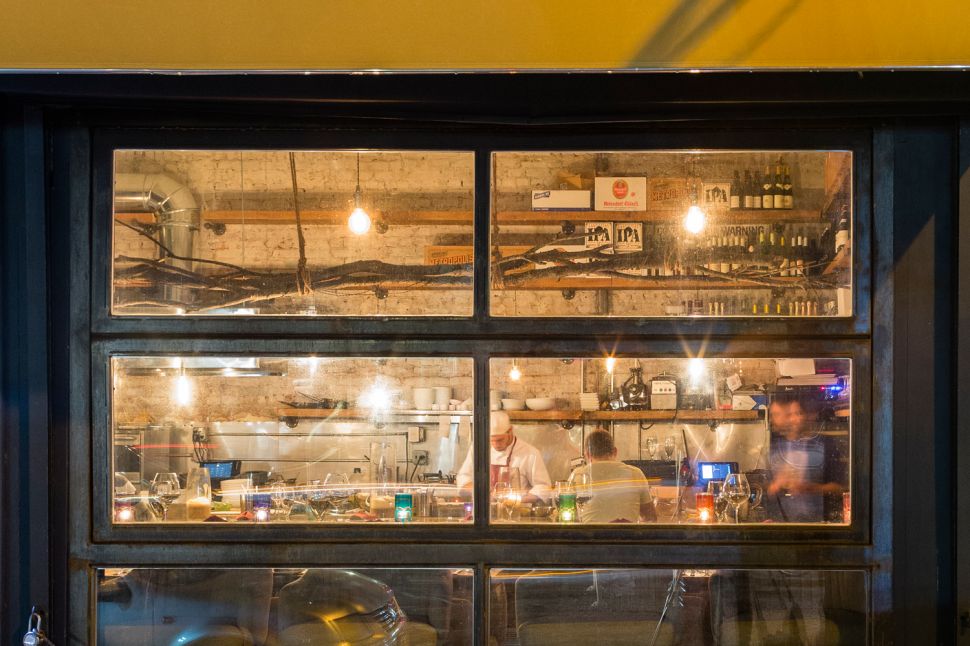