Because the Observer’s own Brady Dale and Vinnie Mancuso were going to skip work today anyway to binge Marvel’s Jessica Jones in its entirety, they decided to review each episode as they go along. Next up, episode two: ‘AKA Crush Syndrome.’

Vinnie: Listen, through two episodes this show is doing a great job of making me like Jessica Jones, submerging me once more into the darker side of the MCU, and intriguing me with these hints of Kilgrave.

Unfortunately, what this show is doing best is making me want to see a lot more Luke Cage.

I mean, that’s not a completely negative thing. I’m just worried that Jessica Jones, already an obscure character, will be overshadowed in her own show. So for now, I’ll refrain from discussing Luke Cage. I won’t even mention how fantastic it was to watch him nonchalantly wreck fools in his bar. I won’t, not even once, talk about how I want to screenshot the exasperated look on Mike Colter’s face when that dude tried to break a bottle over his head. Nope. Won’t do it.

Brady: They had a great chemistry in that scene. I told Vinnie we should just do the whole review about the bar fight. The other nice thing about that scene was that they made the subtle differences in their powers clearer. Jones is strong. Cage is hella strong. Jones is pretty down to hurt people bad. Cage just wants fools out of his face. He’s no drama even when folks are trying to kill him.

I’m going to back up here for a minor aside: I think Netflix is doing great things for television. I re-watched Daredevil before Jessica Jones started, and dug it just as much the second time. In fact, I got anxious about episodes ending, just because I liked each one so much.

They all go on too long, including the one for this show, but Jessica Jones has an intro that at least has a few things going on and good music, so it’s not quite so horrible to watch again and again as the ones on the company’s other original content.

Vinnie: I know every review, recap and blog talking about Jessica Jones is going to talk about how dark it is, but whoa boy even two episodes in this show has eclipsed even Daredevil, and that had a guy jamming his own eye into broken glass. No, no here we have Jack Denton, a man who donated both kidneys to Kilgrave and lost most mental and physical abilities in the process, begs Jessica Jones to put him out of his misery. I guess here is a good a time as any to mention Krysten Ritter is absolutely killing it (Well not killing Denton. That she refuses to do). She’s essentially playing two roles — Jessica Jones’ tough exterior and the badly damaged interior — and excelling at both while still keeping a consistent character.

That, and any woman who says “I don’t give a bag of dicks what kinky shit you’re in to” endears herself to me immediately.

Brady: Just for the record here, she said that to a woman who appears to be banging her brother. We find that out after Jones gets so fed up with their noise that she goes upstairs to yell at them. It isn’t immediately apparent that they are a brother-sister kink team, but we learn it later. This is probably not the case, but I just want to throw out there that Marvel does have a pair of creepy fraternal twins who were much stronger together, the Fenris Twins, the children of Baron von Strucker, founder of Hydra. Hydra is already very much ensconced in the MCU, so there is some chance that these incestuous siblings might be headed for bigger things.

Vinnie: I think that signals the time to get into some good old-fashioned comic booky- speculation. Jones’ best friend Trish, of Trish Talk hosting fame? The one who spends her night viciously learning self-defence by having a man point a gun at her head? That’s Patricia Walker, who one day becomes Hellcat. Here’s a comic cover depicting Hellcat riding a giant wolf, something that will never happen in Marvel’s Jessica Jones.

Brady:  I love it so much that Patsy Walker is showing up here. Just for the record, she’s been a great supporting character in Marvel for years, but she goes back even further. She first showed up in teen comics in 1944!

To keep the comics spelunking going. We don’t actually know why Jessica Jones was spying on Luke Cage yet. It turns out that she wasn’t doing it at the behest of the husband of one of the women he was shagging. We do know she had a folder full of photos and news clippings, however. One of those news clippings is for the funeral of Reva Connors. We also seem to have a photo of Luke standing at Connors’ gravesite.

Later, we learn that Connors was killed on the day that Jones saw Killgrave hit by the bus (umm, a flashback scene that could have maybe been kinda a little better written). She sees her name on the computer screen when she manages to get into hospital records. She investigates Denton, first, though, so look for Connors to come up soon.

Vinnie: As cool as it is to have Carrie-Anne Moss in pretty much anything, I hope the lesbian love-triangle her character Jeryn Hogarth is embroiled in is either dropped, or somehow pays off in some meaningful way. Because right now, I can’t see any reason whatsoever for it being included in this show. The moment when her mistress says “Talk to your wife…SHE KNOWS” felt like it was airlifted and dropped in from another show, probably one that airs on ABC.

Vinnie: One thing I love in any medium is when a writer takes an obscure, ridiculous villain and makes them fucking terrifying. Can you imagine the reaction when Jessica Jones’ writer suggest THE PURPLE MAN as the main antagonist? Probably straight laughter, until someone was like “Yeah he can tell you to go piss in a closet, and you do it.” David Tennant is also fantastic as making a posh British accent completely menacing.

Brady: And if you haven’t seen the episode yet, Killgrave does in fact tell someone to piss in a closet. And it’s a cute little girl. And Marvel lets us see the piss running out from under the door. So that was nice. 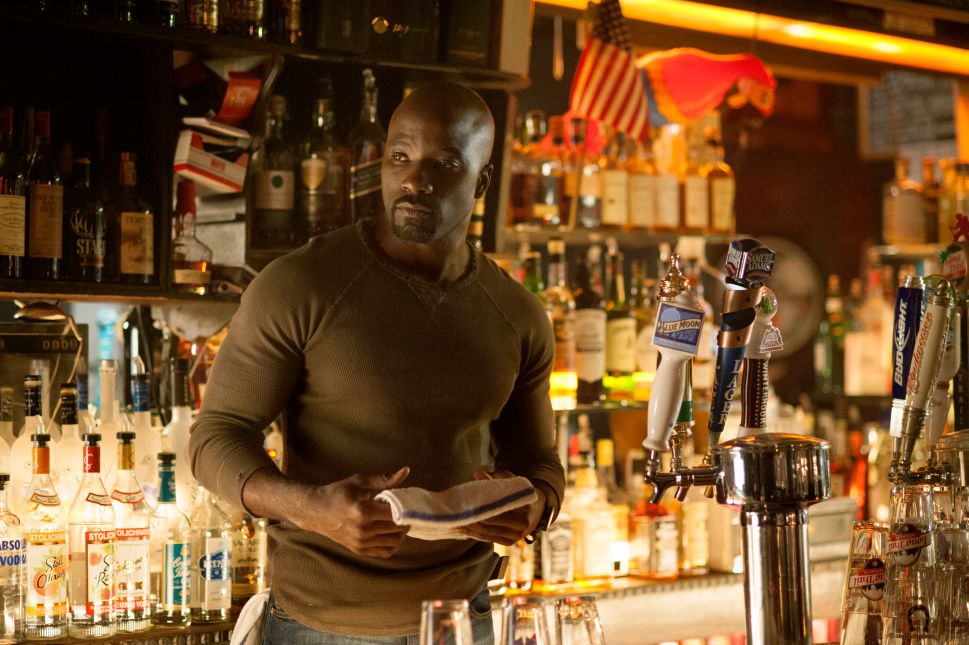