I binged Aziz Ansari’s Netflix series Master of None in one fell swoop on Saturday, which has to be some sort of binge record. Do I even really need this Congressional medal? No, watching this show was its own reward. I mean, there’s a scene where Ansari’s character Dev and Eric Wareheim’s Arnold debate that second verse of ‘Lose Yourself’ by Eminem while Julee Cruise’s “Falling” from Twin Peaks plays in the background. Come on Netflix, that’s not fair: you can’t just take an algorithm based off my love for 8 Mile, Twin Peaks and (somehow, creepily, like you guys went all Skynet with Amazon) my two hardcover purchases of Ansari’s Modern Romance and just plop it into a long tracking shot in a narrow hallway. How did you guys even know about my love of long, claustrophobic tracking shots? I swear to god, I watched Snake Eyes on DirecTV; you self-aware A.I. sons of bitches!

Master of None is a great vehicle for Ansari, who is a much more thoughtful and gentle spirit than his early career suggested. After gaining infamy for his cameo as RAAAANDY! in Judd Apatow’s Funny People, Ansari spent a couple of solid years as a standup doing material about his cousin, Harris, and rapper R. Kelly. Not that he wasn’t funny, but the general impression you were left with after his shows was less “Wow, this guy is a real deep thinker re: racial and gender constructs and their (sometimes conflicting) fluidity in our increasingly technocratic landscape!” so much as “Wow, this guy is a real deep thinker about the time he met Kanye West.”

And I’ll be the first to admit: I had trouble separating Ansari from his character Tom Haverford in Parks and Recreation. Though Tom and Dev share some similar qualities with Ansari–all three men are foodies who love hip-hop and could all fit comfortable under the umbrella description of “Social Media Dandy”–Ansari as Dev, on a show he created, wrote and produced, is much more like the Ansari we were introduced to in his socio-memoir Modern Romance. Unlike Tom, Dev is not full of bluster and swagger: his approach to the world is at once both more wide-eyed and aloof than Haverford’s ADD-manic jadedness. As Dev, Ansari might as well be Louie meets Teflon: with perhaps a few key exceptions (like the second episode, ‘Nashville,’ and the finale), Dev is less a participant in his own life than the captive audience for other people’s drama, in which he plays a small but crucial part. The episode where he gets involved with a sultry married woman (Claire Danes, who is funnier than she looks) and is discovered by her husband while hiding in his underwear in their closet is straight out of slapstick West End production of Noel Coward, resolves itself with Dev running into the couple at a later date and absorbing their tale of recovered fidelity with an almost clinical interest.

If scientists were more prone to comment “Oh wow!” or “Gee!” instead of “Eureka!” Dev might fit the model to a T. Each episode is a teleplay-as-hypothesis (most of which you can find in Modern Romance), which then gets tested over the course of an episode. Ideas such as “Hollywood has a problematic relationship with Indian men,” and “First-generation Americans are more privileged and entitled than their parents, to the point of obliviousness,” may seem like obvious concepts, but they manage to produce refreshing results in the case studies of a single episode. This is partly due to novelty (for the aforementioned reasons, these are topics that are not frequently tackled in pop culture), but partly because the writing is smart, the casting is excellent (particularly Aziz’s parents, who play his parents on the show because he couldn’t find any Indian actors to play them, but also Wareheim, Noël Wells as Rachel, Lena Waithe as Denise, Todd Barry as his character from The Wrestler turned director, Jon Benjamin as Dev’s co-star in a “black virus movie” and Ravi Patel as a fellow Indian-American actor) and there is no doubt that Ansari and None’s co-creator Alan Yang are far from flippant about the material they’re dealing with.

But like most social anthropologists, Ansari-as-Dev can be a little too clinical, with a sort of glib giddiness that masks a colder, more calculating persona pretty much from the opening scene, in which a condom breaks and Dev immediately halts the sex, needles his date (Wells) into Googling if pre-cum ejaculate contains sperm, accompanying her to buy Plan B (and paying for it! Which would be quite a chivalrous move if he wasn’t so damn pushy about it,) and then depositing her with an apple juice on her front steps, with no plan to see her again. “Welp, that just happened!” seems to be Dev’s whole bemused approach towards dating, despite his frequent vocalization, to his friends, that he’d love to meet a nice, cool girl…and if that means having to juggle a couple of them while he dangles concert tickets as a reward, so be it.

Though the show reveals Dev’s insecurities with relationships in a plausible, if not entirely sympathetic, it also contains traces of a toxic Nathaniel P. syndrome: Sure, Dev wants to fall in love, be a family man, and have real-world responsibilities, but…

But: Dev doesn’t want a date who does Cartman impressions. (Fair.)

But: Dev doesn’t want a date who is a vegetarian. (Less fair.)

But: Dev doesn’t want all the expectations, routine and petty annoyances that come from sharing a life with someone, when he could just as easily remain adrift in a sea of plentiful Tinder fish. (Depending on your worldview, this will either seem totally fair or totally unfair, but at the very least its not a particularly ennobling character trait.)

Dev is actually pretty judge-y: as much as he listens and absorbs, he also repels and deflects: when offered a chance to be on an Indian remake of Perfect Strangers, he balks at the Balki role, hoisted on his own petard of lecturing his friend Ravi about not doing accents during auditions. Though the chance to be on a network show starring two Indian actors would be, as we’ve learned throughout the episode, literally game-changing, Dev refuses the offer out of hand. Is it principles or just pride that keeps Dev from all that Schwimmer money? Dev is not rigid and can be influenced by the opinions of his friends, but just as frequently sources his problems to his gullibility for taking other’s advice, instead of owning up to the responsibility of his own choices. It’s less clear where the line between Ansari and Dev ends when it comes to these subtler nuances in character, because ultimately Dev’s first instinct is proven to be the correct one nearly all of the time: he shouldn’t have had sex with that married lady, or be left in charge of other people’s children, or let a girlfriend make his place so messy that he finds it uninhabitable. If only people would stop being so damn persuasive, or enlightening, Dev could continue to live in his blissful bubble for the rest of time.

But I like to give Master of None the benefit of the doubt, if only because the title itself is as revealing as the final episode about what Dev’s status will remain, should he choose to remain living in self-imposed hipster ignorance, well-meaning as it may be. 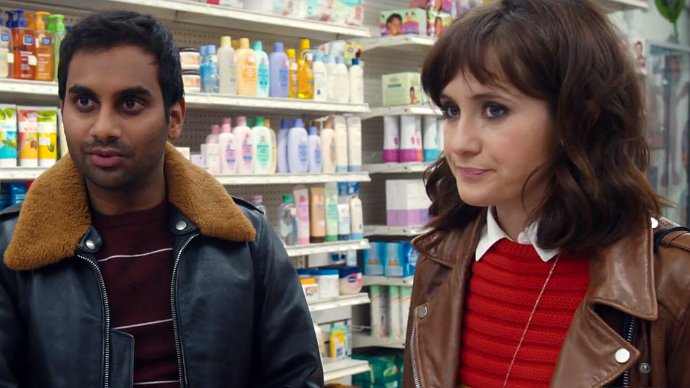