It’s about to get harder to build hotels within the city’s manufacturing districts: Mayor Bill de Blasio and Council Speaker Melissa Mark-Viverito will announce an agreement today to make zoning changes to limit new hotels in Industrial Business Zones, the Observer has learned.

The agreement is part of a broader plan to grow the city’s manufacturing and industrial sector, and comes as hotels have become increasingly common in the city’s Industrial Business Zones, or IBZ’s. Those districts were created to boost the city’s flagging manufacturing industry, but they include areas zoned M-1, for light manufacturing, where hotels have been permitted as-of-right—which some have argued is crowding out manufacturers from a zone specifically intended to protect them.

“We’re big believers in supporting our tourism sector. But while hotels can open in almost any commercial area, these core industrial areas have unique assets that manufacturing firms can’t find anywhere else,” Deputy Mayor Alicia Glen said in a statement provided to the Observer. “These new restrictions will make sure we prioritize job-intensive uses in our Industrial Business Zones, which is why they were created in the first place.”

The mayor’s office and the Council said they will create a new special permit that will be required before any new hotels can be built in light manufacturing districts that are within IBZs, and will put restrictions on mini-storage facilities in those districts—arguing hotels and storage facilities don’t create as many jobs as other potential uses of industrial areas.

The rule won’t apply in the IBZ that surrounds John F. Kennedy Airport, where hotels will not need a special permit because they serve airport-related businesses, the mayor’s office and the Council said. The special permit rules will also be crafted in a way that will not limit the city’s ability to provide emergency housing for the city’s homeless population through shelters, the mayor’s office added.

While manufacturing jobs have declined in the United States and in urban areas in particular, technological developments like three-dimensional printing have put a renewed focus on the sector—as has the city’s investments in projects like the Brooklyn Navy Yard, where businesses churn out everything from hand-crafted ice cream to knitted sweaters.

The deal being announced today comes after months of negotiations between the mayor’s office, city planning, the Council and other stakeholders, and a year after the City Council released a report on how to revamp the city’s manufacturing areas last November that called hotels in manufacturing zones “perhaps the greatest current threat to industrial business in manufacturing zones.”

“We have seen firsthand how hotels can proliferate and push out other types of businesses in the Williamsburg-Greenpoint IBZ,” Brooklyn Councilman Stephen Levin said in a statement provided to the Observer. “This plan will place sensible restrictions on the development of new hotels in areas intended to be reserved for industrial and manufacturing uses and ensure that those types of businesses receive the support and stability they need.”

Many of the city’s industrial zones are close to or overlap with trendy neighborhoods, such as Greenpoint, Williamsburg and Long Island City. In the last five years, 10 building permits have been issued for hotels in manufacturing districts of IBZs in those neighborhoods, according to the city.

“In addition to directly displacing industrial real estate, hotels fundamentally change the character of areas previously reserved for manufacturing and industrial work,” the Council report read. “This is especially true of high-end boutique hotels that include additional attractions like restaurants and bars. These developments can change the economic character of entire districts, often with fewer jobs with poorer wages and benefits than the uses they replaced.”

The Council and the mayor’s office had sparred over IBZs in the past, including over whether the zones should be eyed for workforce housing to meet the mayor’s ambitious affordable housing goals, and over the budget for the zones, which the mayor slashed in his first year in office only for the Council to restore the funding. But in 2016, Mr. de Blasio’s put $1.5 million in the budget for the zones, and baselined it, as the Council had requested—meaning that money will remain in the budget going forward.

Mr. de Blasio and Ms. Mark-Viverito will announce the deal and other plans for the manufacturing industry at the Greenpoint Manufacturing & Design Center later this afternoon. 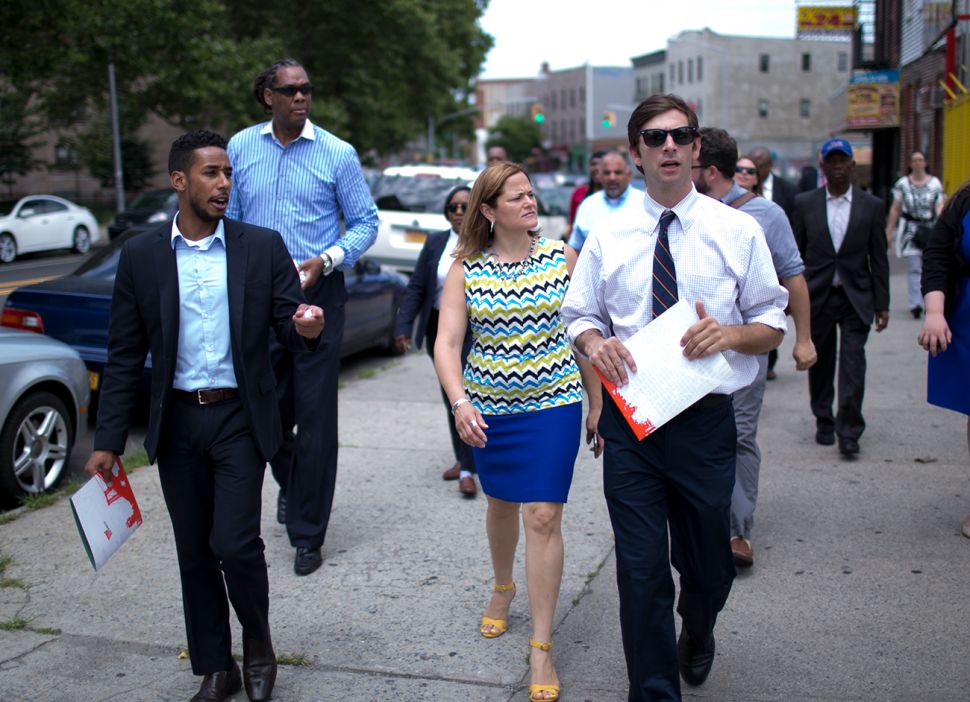