The legislature has the will to make it happen, but Christie doesn’t.

“I hope we can get to it before a real tragedy happens,” said Bennett, giving a nod to deteriorated bridges and roads.

“The governor is not going to sign a gas tax as a candidate for president,” Bennett added.

On Nov. 2nd Christie said he was open to a gas tax as long as there is “tax fairness,” and hinted at a gas tax hike trade in exchange for a reduction of the inheritance tax.

Queried by 101.5 FM’s Kevin Mcardle, Governors Jim Florio, McGreevey and Donald DiFrancesco all chimed in to back up Bennett’s POV.

“The question is how to implement a tax that impacts a substantial number of New Jersey’s out-of-state drivers who use New Jersey’s thoroughfares,” McGreevey said. “Obviously the gas tax impacts the middle class and poor very different than the affluent. I’m sure we can look at a number of different mechanisms. What percentage of the tax belongs at the distillery, for example?

“How to create the most equitable means?” he added.

A survivor of nine legislative elections, DiFrancesco said no one ever loses an election because of the implementation of a gas tax.

As for the Gateway Tunnel project, estimated to cost in the billions, Florio cautioned about celebrations abut a deal struck last week regarding funding sharing.

“New Jersey has no money,” the former governor said. “Amtrak has no money. The federal government cant get itself together in terms of balancing its own budgets. This is an important thing to consider. Someone says ‘I agree to pay this money,’ and they’re gone before the money is due.”

Florio said he would hate to have the task of delivering the next state of the state.

“Because the state of the state is deplorable,” he said. 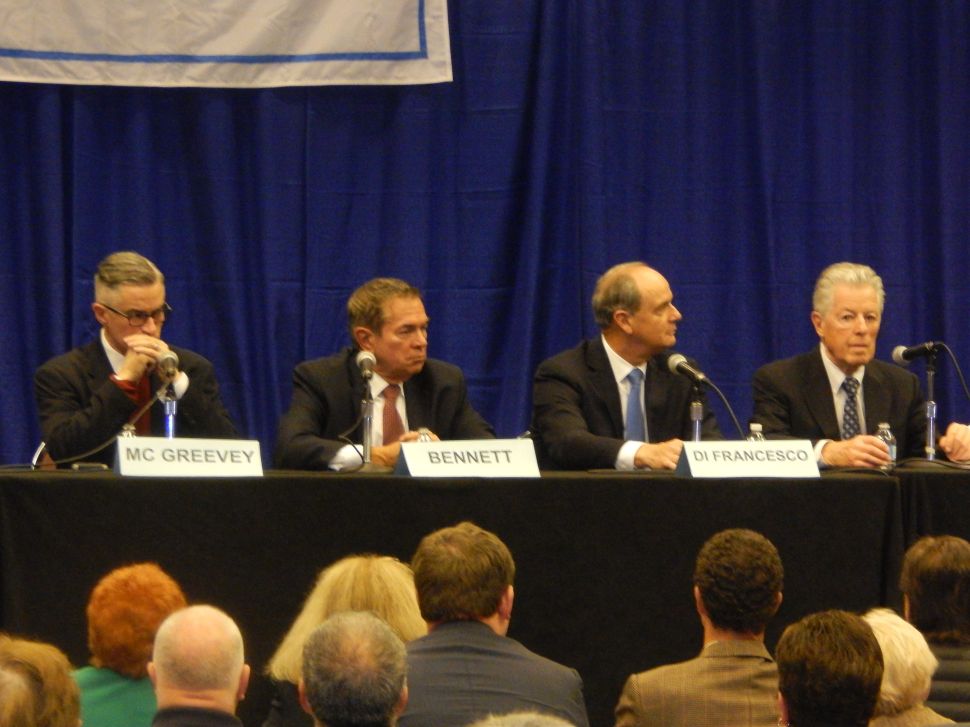