Did you notice a ding sound when your yellow cab driver was fighting traffic on 7th Ave this morning? If so, you weren’t riding in your typical NYC taxi.

Eight years ago, an Israeli company called Mobileye began outfitting consumer vehicles with vision-based collision avoidance technology that uses sensors, pattern recognition and artificial intelligence to warn drivers of risks that could lead to an accident. Its features can now be found in over 100 models across most major vehicle manufacturers (including Audi AG, BMW, Chrysler, General Motors, Ford, Honda, Hyundai, Kia, Jaguar, Land Rover, Mitsubishi, Tesla and more), and now, after proving its capable to reduce accidents by 39 percent, Mobileye is busy working with the MTA, the NYC Taxi and Limousine Commission and Ambu-Trans to bring the system to public transportation and medical vehicles in NYC.

Mobileye is the underlying infrastructure for autonomous vehicles, and the way it works is simple. Just drive as you normally would and the system will alert you with auditory and visual warnings (via a small screen on the dashboard) if you’re in a situation that could lead to a collision. Using AI technology, the Mobileye computer can measure how many seconds you are from crashing, differentiate moving hazards like pedestrians and cyclists from immobile objects and  can even detect which direction a person is heading. In total, this allows the system to give drivers six different types of alerts:

Forward collision warning. The system will provide an alert 2.7 seconds before an impending collision with a vehicle. This is for when you’re driving and when you’re stopped at a red light, inching closer to the car in front of you.

Pedestrian and bicycle collision warning. For impending collisions with pedestrians or cyclists, it issues alerts 2.0 seconds before the collision.

Lane departure warning. “Some call it ‘electronic rumble strip,’” Michael Backman, vice president and general manager of Mobileye US operations, told the Observer. It provides an alert if the vehicle is about to enter another lane without the use of a turn signal. This can be fine-tuned for sensitivity and only functions when the car is traveling 33 MPH or more in order to eliminate unnecessary alerts in parking lots and other places of the sort.

Headway monitoring/following time. This feature helps drivers keep a safe distance from cars ahead of them by tracking following time, travel speed and the distance between the vehicles. This feature is activated at 19 MPH, and if you’re too close, there will be an alert.

Intelligent high beam control. To keep driving conditions safe for others on the road at night, this feature will automatically turn high beams on and off depending on the surrounding traffic. When tail lights are detected in front of the host vehicle up to 1,312 feet, the system will automatically turn off high beams. It will do the same when an oncoming vehicle is detected up to 3,280 feet. When deemed safe, the system turns the high beams back on again.

Speed limit indicator. This feature automatically recognizes speed limit signs and alerts you if you’re speeding, also displaying your speed on the dashboard screen. This can be fine-tined, so you can choose if you want to be alerted going 5 MPH, 10 MPH or just 1 MPH over the limit.

“There’s a handful of features. Some are very valuable in urban areas, and some are better in rural areas,” Christopher Ritter, the company’s regional sales manager, said as we drove around Central Park and Manhattan’s west side in a Mobileye-equipped car, testing the different features. He explained the importance of the timing and frequency of the alerts, citing that four seconds before an impending crash, for example, is too much time, would result in many ‘false alarms’ and would eventually lead drivers to ignore the alerts.

(Go to 2:42 in the video to see how the system operates in action)

For years, consumer vehicles and freight trucks have been using Mobileye. Car manufacturers want five-star safety ratings they can tout in their ads, and this helps them achieve that. According to Mr. Backman, one in five fleet vehicles get into an accident each year. “Businesses see this pay off. There’s no trade off. It only helps,” he said.

As mentioned, Mobileye has been shown to reduce accidents by 39 percent. When looking at only accidents caused by the driver using the system, that number is 50 percent, according to the company. Besides just stopping accidents in the moment, Mobileye also encourages and enforces safer driving habits. Within Mr. Backman’s first month driving with the system, he had about 280 lane departures because he’d often change lanes without signaling. “It changed my habits,” he said.

This success caught the eye of Christopher Hart, the chairman of the U.S. National Transportation Safety Board, who said this technology should be mandated in all vehicles.

NYC is taking steps in that direction. This past summer, Mobileye began a pilot program with the Taxi and Limousine Commission and equipped 20 official city cabs and limousines with the technology. The MTA is on phase two of a Mobileye program and is also using the company’s additional system called Shield Plus, which uses extra cameras on the sides and backs of the buses for added protection against pedestrian and cyclist collisions. Select city trash trucks as well as vehicles for City Administration Services and other various agencies are now equipped with Mobileye as well and are currently collecting data on accident rates.

“The safety of our drivers and passengers is of utmost importance.” Neal Kalish, President of Ambu-Trans, said in a release. “With its real-time alert system, Mobileye’s Aftermarket system is an important addition to our fleet safety program.”

Going forward, the company is looking to expand their pilot programs with more businesses and citywide departments in NYC and other major U.S. cities. They’re looking to get involved with ride sharing apps, as well. 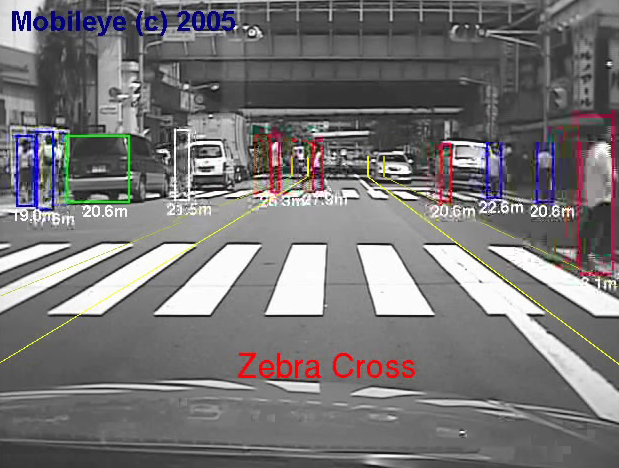