NEWARK – U.S. Senator Bob Menendez today announced his co-sponsorship of a new bill aimed at killing a newly passed provision in the 2015 federal budget that he feels opens Americans to a flood of scam phone calls from automated calls posing as the IRS.

“People must be protected from over-the-phone predators trying to steal your money,” said Sen. Menendez. “Not only does this budget provision open the flood gates to more nuisance phone calls interrupting dinner and family time, but it blurs the line between what is legit and what is a complete and utter fraud.”

Menendez co-sponsored the bill—called the Help Americans Never Get Unwanted Phone calls (HANGUP) Act—last week. According to the Senator and his co-sponsors, the new provision in section 301 of the 2015 budget undoes protections in the Telephone Consumer Protection Act (TCPA) and the Fair Debt Collection Protection Act (FDCPA). Previously, the IRS would not call to collect debts prior to sending a bill or receiving the called party’s consent. The new provision undoes that, allowing calls to be made by agencies and third parties before a bill has ever been sent or the initial permission has been granted.

“It erodes the work we’ve done to better protect people from unwanted phone calls, like pushing for increased ‘Do Not Call’ protections, it leads to confusion and—worst of all—it unnecessarily increases the risk of falling victim to a scam,” said Menendez.

To assert his point, Menendez enlisted the help of Linden Police Capt. James Sarnicki, Leonia Police Chief Thomas Rowe and Det. Michael Jennings and Linda Maiorana. Maiorana is a Bloomfield resident who received several phony IRS robocalls and helped bring the issue to the attention of the Senator.

“I, myself, received numerous phone calls from a female claiming to be with the IRS stating that I owed large sums of money and that if I didn’t call back and make arrangements for payment, a lawsuit would be instituted against me,” Maiorana said. “These calls were over a three-to-four-day period.”

According to Menendez, the provision was not put into the budget—which he called a “nowhere near perfect compromise”—due to any kind of robocall lobby or push in the legislature. He, instead, said that the provision stems from the desire of some Republicans to focus on taxpayer debt as a way to offset some federal budget woes.

“I think everyone should pay into their debts but there is a right way to do it,” Menendez said, noting that an estimated $23 million has been lost to these scams so far.

Det. Jennings was able to track down about $150,000 of that stolen money to two individuals in Union. He claims that the government is currently working on tracking down who the money was scammed from. The detective also claimed that some of the issue stems from foreign call centers, which make it difficult to trace funds.

So far no rollout plan for HANGUP has been enacted but Menendez said he thinks that the bill is common sense and that it will be able to draw support on both sides of the aisle.

“I hope be are going to build a bipartisan coalition to move it,” Menendez said. Until then, however, the Senator has said that he hopes to communicate to the IRS that, while they are legally permitted to use the new provision, the agency should withhold making such phone calls in order to reduce the confusion when a scam call is received.

Menendez is still encouraging a hang up on any automated call that appears to be sent by the agency. Then he says that the agency number should be looked up and called directly, avoiding ever using numbers from automated messages. In order to get the point across, the Senator is touting the mantra of “If they say it’s Uncle Sam, hang up; it’s a scam,” to remind constituents how to handle automated phone calls.

Senator Menendez is currently facing indictment on charges that he accepted bribes from a friend— Salomon Melgen, a Florida doctor—in exchange for gifts and political favors. The Senator has sworn time and time again that he is innocent of any wrongdoing and that he will not be skirting his duties as senator or stepping down amid the charges. His co-sponsorship of the HANGUP Act is just the most recent demonstration that he will not allow the indictment to put the brakes on his political career. 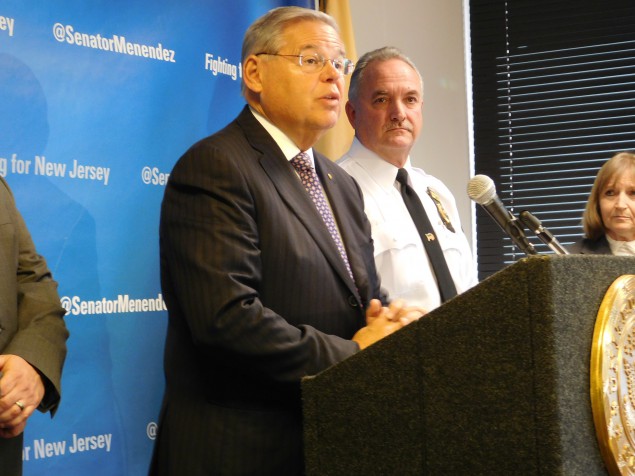