42nd St shuttle to #TimesSquare covered in Nazi Germany and Imperial Japan symbols for @amazon ad. Is this ok? pic.twitter.com/ysJ3m0UIPT

The MTA decided on Tuesday to pull advertisements utilizing Nazi and Imperial Japan iconography to promote Amazon’s The Man in the High Castle. The decision came after outcry from not only the public but Mayor Bill de Blasio himself, who called the ads “irresponsible and offensive.”

Assemblyman Dov Hikind also said in a statement: “The pain [Amazon is] causing by plastering the subway with Nazi regalia is disgusting.”

Man in the High Castle, based on the Philip K. Dick novel of the same name, depicts an alternate reality in which the Axis powers won World War 2. The advertisements included entire seats on the 42nd Street Shuttle, as well as posters in more than 260 subway stations depicting New York landmarks adorned in swastikas.

The Amazon series has been running into problems with its imagery since well before its premiere. Executive-producer Isa Dick Hackett told us the show had problems for years finding a network comfortable with High Castle‘s subject matter. Entertainment Weekly noted that High Castle‘s opening scene, set in a Nazi-controlled Time Square, was filled in an empty lot after prior shoots drew complaints. Some of the show’s imagery had to be added digitally in post-production, as numerous locations refused to dress sets with Nazi insignia.

For those citing a lack of common sense on the MTA’s part, it’s interesting to note that not two months ago the MTA went to court in an attempt to ban advertisements for documentary The Muslims Are Coming! the agency worried were offensive. In almost the exact opposite of the High Castle situation, Judge Colleen McMahon ruled the MTA had to display the The Muslims Are Coming! posters — which included slogans like “The Ugly Truth About Muslims: Muslims have great frittata recipes — saying the “advertisements are undoubtedly commercial under the new policy; they promote and solicit the sale of the documentary.” 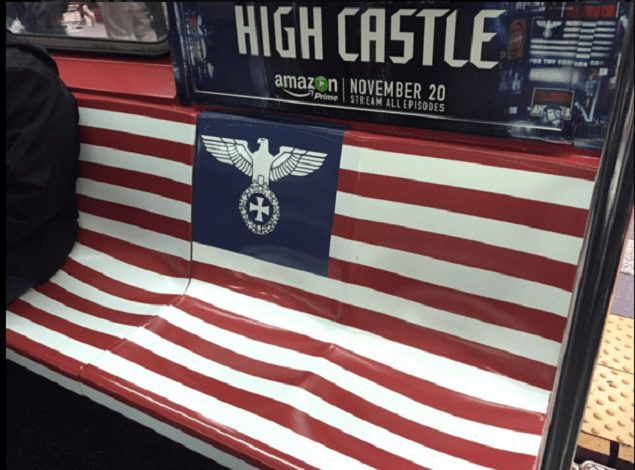