A room situated deep underneath a Temple, surrounded by piercing screams, almost sounds like the setting of a Neil Gaiman story. But last night this environment was where I and a handful of journalists met up for an intimate discussion with the prolific author of countless novels, children’s stories, comic books, and television. The Temple in question is the Congregation Beth Elohim in Park Slope, where later that night Mr. Gaiman held a sold-out Q&A with novelist Junot Diaz, discussing Sandman: Overture (of which the collected Deluxe Edition is available November 10).

And the screaming, well, that belonged to an endless hoard of children attending the Congregation’s after-school program. Not exactly a Gaiman ghost story, but equally as terrifying.

Mr. Gaiman, by contrast, speaks at a deep, thoughtful timbre, a tone that somehow seems appropriate paired with last night’s choice of outfit (black jacket, paired with black shirt and black pants) and his dark, shaggy mop of hair. For decades, the UK-native has dabbled in everything from high fantasy novels, to children’s horror, and even two episodes of Doctor Who. But this night, he was here to discuss the project which thrust him into the spotlight – the genre-defying Vertigo series Sandman, which from 1989 to 1996 told the story of Dream of the Endless and his six siblings (Destiny, Death, Desire, Despair, Delirium, and Destruction). Sandman: Overture, a prequel to the series’ original 75-issue run, is an emotional, gorgeous book (artist J.H. Williams III’s layouts alone are astounding), absolutely worthy to fit in the grander Sandman canon.

Along the way, we also discussed audience expectations, the nature of fandom, and whether or not Mr. Gaiman has any Sandman left in him.

“Two things are true: When you answer questions, they beg other questions. And sometimes when you put those questions down on the page, you go “Oh my God, there’s a hole where a story fits.”

On the expectations for Sandman: Overture

Neil Gaiman: I am familiar with people going back to work they did 30 years ago, and you look at it and go “Why did you do that? It was so good. And now you’ve completely cocked the whole thing up.” [Isaac Asimov’s] Foundation books and the Robot books really belonged apart [laughs]. You don’t want to Phantom Menace it. I didn’t want to make something less than what Sandman had been, I wanted it to add to what Sandman already is. When I finished reading it, I thought I achieved that. If nothing else, now you know some of these characters better. You have a lot more insight into what was going on with Dream, who he was in Preludes and Nocturnes, why he did what he did in A Doll’s House, things of that nature.

I was lucky in that there was always one huge story-line that obviously existed that I had not told. It was absolutely eluded to; not just eluded to, talked about directly. If you read the entirety of Sandman very carefully, you would have learned that before Sandman #1 Dream was returning from a distant galaxy, in triumph of a sort, tried beyond all measure. But you never knew why. Knowing [that story] was there was reassuring. It wasn’t like I had to sit down and make up something to fit in. I knew what happened-ish. After that, it was just details, but the devil is in the details.

On the early days and lasting legacy of Sandman

When I started it 25 years ago, my highest hopes were that maybe if I was lucky they wouldn’t phone me at issue #8 and tell me we were cancelled. I figured that probably we would be a minor critical success, which in 1988 meant that you would be a major commercial failure. It was pretty much 1 to 1, it wasn’t like there were major critical successes that were also commercial successes. There were the books that sold, and there were the books the critics like that usually got cancelled pretty soon.

The idea that 25 years later, all of that work would still be in print, was shocking. And glorious. In 1988 if you wanted to read old comics you went to the comic shop and you went thumbing through the back issue bin.

On a scene from Sandman: Overture, Chapter 2, in which Dream meets his many personifications

That was the scene that I had wanted to write the longest, and by the longest I mean 26 years. I had always known that I would do this scene one day, where every possible incarnation of Dream is in one large notional space, at the same time, and that they would interact as they slowly blinked out of existence. I loved that. I was waiting to write that for 26 years. And the joy of writing issue 2 was it was perhaps the first time ever Dream gets a little outside perspective on himself. But so does the reader. The reader sees that Dream is actually not a tall pale guy with dark hair and a coat, he is something much more primal.

On his relationship with illustrator JH Williams III, the man behind many of Sandman: Overture‘s complex page designs

Sometimes we would wind up on the phone together, talking about the issue I would write next, trying to figure out how to do things people hadn’t done before. There is a point in here where I still don’t know how people are going to read it on an iPad. You actually have to turn the book around, and it ends up doing a 360 degree turn over two double page spreads. Which is actually quite important to the story.

The only moment it got frustrating for me was when I was trying to figure out ways to tell the story in Chapter 5. And I was really very proud of myself for a period of about eight seconds, while I thought we could build this entire thing as a Mobius strip. Then it was like, “Fuck he did that already.” It’s one of the best sequences in Promethea [a series drawn by Mr. Williams III, written by Alan Moore].

On having more Sandman stories to tell

Two things are true: when you answer questions, they beg other questions. And sometimes when you put those questions down on the page, you go “Oh my God, there’s a hole where a story fits.” I’ve known that the Endless had parents, and who those parents were, for a very long time now. And if you go back into the body of Sandman now and look for references to Night and Time, you will find them.

I definitely still have stories. There are definitely Sandman things that I haven’t done. And there are parts of me that go “Okay, I could do this for the 30th anniversary, I could do this for the 50th.” The only thing I probably wouldn’t do is a Delirium mini-series, because I’ve seen [letterer] Todd Klein wailing about it. Todd Klein now talks about had he only realized when he was creating Delirium’s font that it was something you couldn’t do with a computer, he would have never done it. He has to do any Delirium dialogue by hand. There’s no way you could look at anything Todd does and know it was done on a computer, it all seems hand-done. But it’s not, except for Delirium. You can not build algorithms that create that. He’s tried [laughs].

On how geek fandom can become more inclusive

Stop shouting at each other, is the biggest thing at this point. One of the best things about fandom, for me, as a young fan and then as a young professional, was it was really hard to find your tribe. And you would make allowances for the ones that you did find, because finding somebody else that liked comics, finding someone else that liked science-fiction, someone else that bought ancient, weird, smelly paperbacks just because they had Frank Frazetta covers, finding those people was hard.

And now, when it is incredibly easy for people to find each other on this virtual village, it’s also incredibly easy to close ranks. It’s easy to say “We are this kind of fan, you are not of us, and now we will gather together and shout at each other.”

On Wanda, the controversial transgender character appearing in the original Sandman run

I don’t see [Wanda] as tragic. I would see her as tragic if everybody else in Sandman had lived. But Sandman is filled with characters who died, it’s what they do, it’s practically a hallmark of the series. She dies because A) she was the character whose death meant something in that series, emotionally, and B) I had learned from my trans friends who were very upset about it, that friends of theirs were being mis-gendered in death. The fact that people who had lived as one gender were being buried by their family under a name they didn’t think of as theirs, was something I thought “I don’t like that, and I just discovered that, and I’m going to put that in Sandman, and I’m going to show that Death thinks that is bullshit, too.”

On avoiding the temptation to lean on nostalgia

The main challenge just becomes not writing something you have written before. All the way through Sandman: Overture, if there was a real problem it would be the point where I went ‘Great, now I can do this, and I can have a panel sequence here, and…shit no I can’t. I did that already.” So trying to always not repeat yourself, and be new, is really frustrating. It would be uber easy to do the same thing over and over. Then again that was the nature and the joy of Sandman. The stories didn’t repeat. Everytime someone said ‘Oh we love the thing you’re doing, we loved Season of Mist!’ I’d follow it up with something like A Game of You. The stories were always not what they had been. In order to talk about Sandman you had to talk about the whole. And I hope [Sandman: Overture] has just made that whole deeper…he said, doing a clever thing with words. 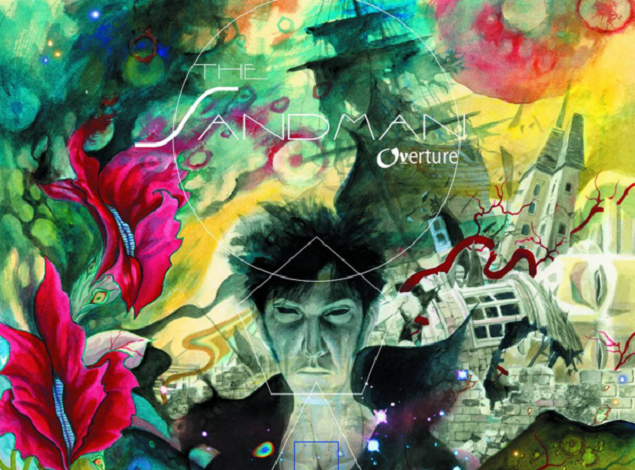