On Thursday, NASA announced another major finding from their Mars mission regarding the planet’s atmosphere, which is nearly 100 times thinner than Earth’s—consisting of 95 percent carbon dioxide, 2.7 percent nitrogen, 0.13 oxygen, and several minor gases.

Some clarity has been provided to the question scientists have been asking for decades, “Where did the atmosphere and on Mars go?”

“The answer is blowing in the wind,” said Michael Meyer, Lead Scientist for the Mars Exploration Program at NASA headquarters in Washington.

Mars’ atmosphere was pushed out by solar wind and the planet lost its ability to protect itself from the sun—likely losing most of its atmospheric gas millions of years ago during major solar activity, as strong winds and radiation eroded the molecules necessary to preserve the planet’s oceans and atmosphere.

The findings come from data obtained by the MAVEN (Mars Atmosphere and Volatile Evolution) spacecraft, in orbit around Mars since late September 2014.

It seems that the more we study Mars, the more we learn how life could be supported and where there are resources to support life in the future.

This recent announcement adds to the speculation that Mars looked a lot like Earth at some point in history, and may have even harbored life. Today the planet is cold, but billions of years ago the atmosphere was warm enough for flowing rivers, lakes, and oceans.

This past September, NASA made one of the biggest announcements in the organization’s history: the discovery of on Mars. The news leaked when several researchers discussed the findings in a study published earlier in the week.

“Using an imaging spectrometer on MRO, researchers detected signatures of hydrated minerals on slopes where mysterious streaks are seen on the Red Planet. These darkish streaks appear to ebb and flow over time. They darken and appear to flow down steep slopes during warm seasons, and then fade in cooler seasons. They appear in several locations on Mars when temperatures are above minus 10 degrees Fahrenheit (minus 23 Celsius), and disappear at colder times,” NASA announced in a press release.

“It took multiple spacecraft over several years to solve this mystery, and now we know there is liquid  on the surface of this cold, desert planet,” Mr. Meyer said in a press release. “It seems that the more we study Mars, the more we learn how life could be supported and where there are resources to support life in the future.”

The existence of  on the planet’s surface makes life on Mars a more tangible reality.

Rumors first circulated about the discovery of flowing  on the planet’s surface with the release of a paper in September, prior to NASA’s official announcement. In it, researchers confirm an initial hypotheses that images taken by the Mars Reconnaissance Orbiter of seasonal dark streaks seen on the planet’s surface are caused by periodic briny . “Pure  would rapidly evaporate and/or freeze on the present-day surface of Mars at most times and places; however brines are far less volatile compared to pure  due to their lower freezing points and evaporation rates,” the paper says.

Though flowing  is identified, the source has yet to be understood or explained.

“The origin of  forming the Recurring Slope Linae is not understood, given the extreme aridity of Mars’ surface environment.  could form by the surface/sub-surface melting of ice, but the presence of near-surface equatorial ice is highly unlikely.  could also form via deliquescence by hygroscopic salts, although it is unclear how the Martian atmosphere can sufficiently supply  vapor every year to create RSL. The absence of concentrated deliquescent salts would rule out this hypothesis. Another hypothesis is seasonal discharge of a local aquifer, which concentrates salt deposits as the brine evaporates, but then lineae emulating from the tops of local peaks [10] are difficult to explain. It is conceivable that RSL are forming in different parts of Mars via different formation mechanisms. The new compositional insights reported here from widely separated sites provide essential new clues.”

Earlier this year, NASA discovered—using infrared telescopes from ground-based observatories—that Mars, one-sixth the size of Earth, once had a body of  holding more  than the Arctic Ocean. Roughly 4.3 billion years ago, Mars had enough  to cover its entire surface, but scientists believe it is more likely the mass formed an ocean in the planet’s norther hemisphere.

In 2012 a team of German researchers at the DLR Planetary Institute simulated planetary conditions of Mars and found that alpine and polar lichens could survive and continue photosynthesis in Mars’ environment. Rumors of life on the planet stem from its similar features to Earth and the discovery of frozen  at its polar caps discovered by Mariner 4 in 1965. The existence of flowing  on the planet’s surface heightens the planet’s potential for life in its past, as well as making life on Mars in the future a more tangible reality.

Breaking: NASA Confirms How Mars Transformed From Earth-like to a Cold Dry Planet 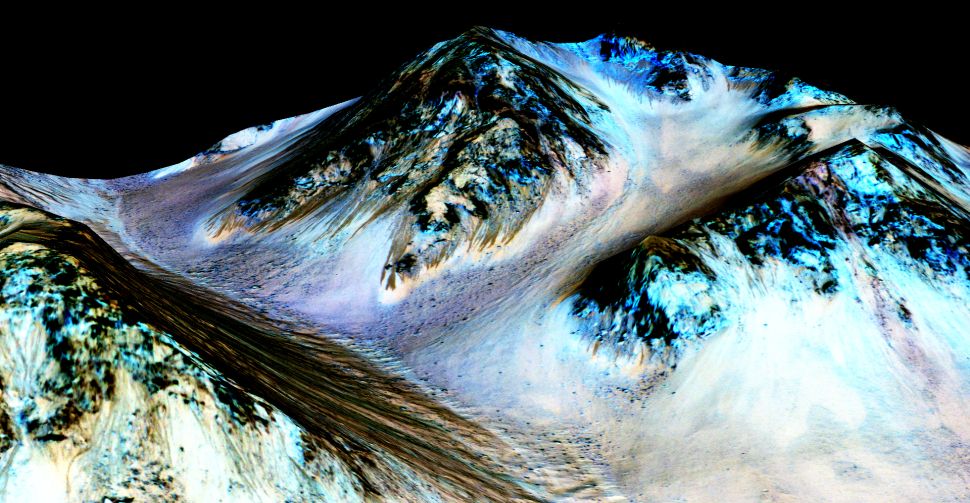