It’s a stormy morning when I enter the Carroll Gardens brownstone that houses Lift/Next Level Floats, but you’d never know it from the inside. The atmosphere is tranquil: fluffy white pillows line the walls, like they would at any upscale Equinox gym, and a young, scruffy man scribbles in a moleskin notebook and sips chamomile in the lounge after an hour-long “float session” in a sensory deprivation tank, of which Lift houses five.

David Leventhal, the sotto-voiced co-owner of Lift, is apparently on good enough terms with his young customer that when the hipster pauses to pay on the way out, the former lawyer waves him away. “Get us back next time,” Mr. Leventhal tells him. This isn’t mere generosity: for the burgeoning movement—or removement—of private floating relies on word-of-mouth and repeat business. Mr. Leventhal, who began floating in his college days in the late ’80s, believes that most clients will (and should) be back.

“In the float industry,” he says, “we recommend you try three or four floats before deciding if this is something that’s for you or not.”

For an industry that all but died out in the early ’90s, more out of fear and misinformation during the AIDS crisis than the fear and misinformation associated with the 1980 sci-fi horror film Altered States (in which William Hurt enters a sensory deprivation tank a scientist and exits as some sort of homunculus), floating culture faces a battle to regain popularity.

“We have a huge percentage of people who come out of their first float and they’re happy and relaxed. But there is something of a learning curve,” Mr. Leventhal tells me when I express fears about being enclosed for an hour in a small space without sight or sound, buoyed by 1,000 pounds of Epsom salts in body-temperature .

Still, he explains, it’s perfectly safe. “With 10 inches of , you’d have to be really acrobatic to flip over.” He references one of his recent overnight sessions: he’d fallen asleep without a problem. “In the 60 years that I’ve been aware of, there’s only been one fatality,” he assures me, “and that person was high on ketamine.” He clarifies: “The cattle tranquilizer.” I must still look skittish, because Mr. Leventhal adds that in the ’80s, Manhattan boasted at least 30 sensory deprivation tanks, “including a 24-hour place. Anthony Bourdain and his chef buddies would get wasted and then go do a float at four in the morning.”

Well, if Anthony Bourdain could do it! I prepare to step into one of Lift’s largest tanks, less of a coffin and more of a walk-in closet with fiber-optic lights in the 7-foot-high ceiling that can be switched on to resemble constellations.

Before I step in, I begin to fidget. Should I really have had that coffee before 60 minutes of tub action? I definitely shouldn’t have had the coffee and the Adderall, I decide, but before I can bow out, I am ushered into one of the float rooms.

Naked on my back (swimsuits are discouraged, as they might introduce extraneous materials into the otherwise hygienic tub), I use the starlights above to confirm my position in the tank before hitting a switch that lands me in complete darkness.

The first couple of minutes prove difficult. My mind, not accustomed to the theta “pre-dream” state these tanks are supposed to induce, searches for anything to grab ahold of to get my bearings. I try to separate the hour into 15-minute chunks: surely I can make it that long without techno-stimulation.

As a frequent sufferer of insomnia, however, slightly panicked boredom soon begins to itch down my side. I bump into the walls of the tank to gain my bearings for a while until my mind indeed begins to loosen its hyper-awareness of my body.

One, body: Far from the uncomfortable associations I have with salt , my skin feels anything but wrinkly; it’s smooth and slippery, like a seal’s. I take out the provided earplugs. Jeez, is my heartbeat loud! I plug my ears back up quickly.

Two, mind: I start puzzling over a pilot I’ve been developing with a friend. Our main character was a bit of a bore. Would that mean we had to scrap the whole project, which otherwise seemed so promising?

I allow that thought to float away from my body as it bobs in the darkness, and focus solely on what kind of person I’d be interested in writing about. Someone flawed, but motivated by something different than I imagined.

The answer comes immediately, as if it had been waiting for me in some suspended state, fully formed but not yet activated. I play through our entire show again with this substitution. (Of course, I’m not going to share the revelation, but AMC, please call me!)

Three: Theta. The room doesn’t seem so dark anymore. Instead, it is like a movie theater with the lights off so to better project the movie on screen, or in this case, behind my eyes. Lacking other distractions, the pieces of the series keep falling into place: where this person came from, where they wanted to go and the circumstances that prevented them from doing so.
Four: Time. It feels like hours; it feels like moments. It passes, apparently, because soon enough the tranquil music signaling my time in the tank is up pipes through the speakers. Only then do I make the single worst decision you can in a float tank: I flip onto my stomach and dunk my head for one final sense-memory. Immediately, my eyes burn, and I spent the next 10 minutes washing them out, along with my hair.

In the lounge, with a cup of tea in hand, I try to tap out all the ideas I dreamed up while floating. I recall the young hipster who had been sitting at the very spot, doing the exact same thing as me. I can’t speak to the physical benefits of the float as much—it apparently relieves chronic pain and discomfort from pregnancy—but I will say that as a creative stimulant, it’s the best legal high I’ve ever had. And for $99, one of the cheapest, too. 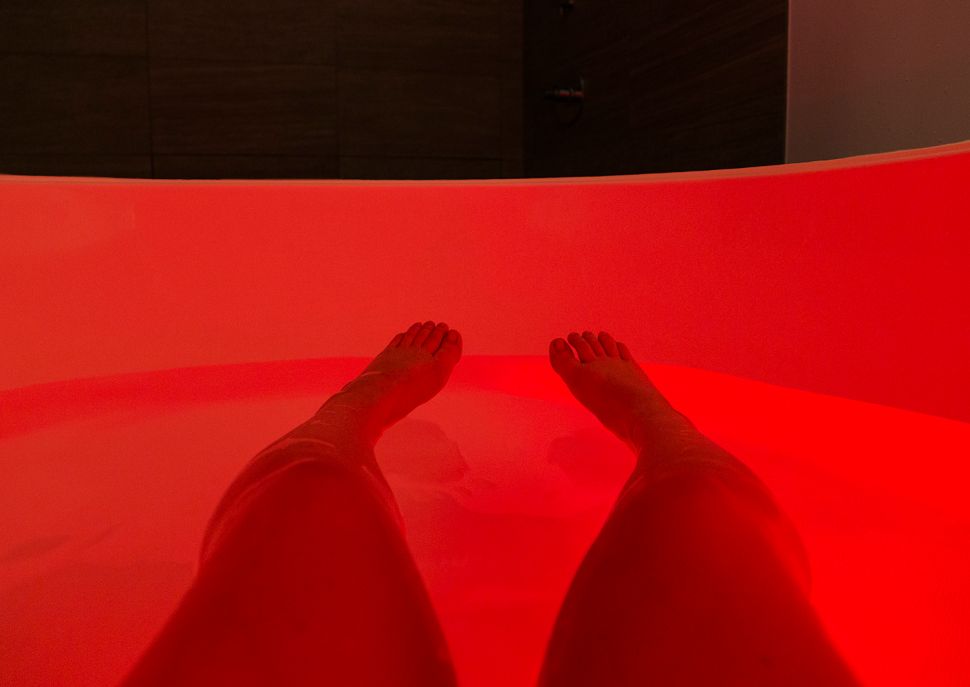