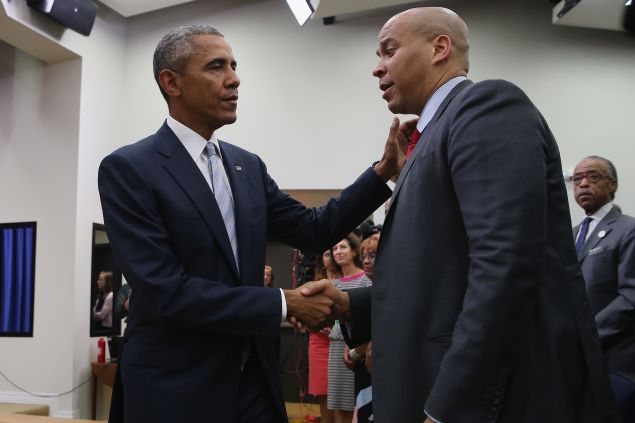 The political speculation that President Obama’s visit to Newark today to help promote Senator Cory Booker’s prison reform legislation is part of some deal – political payback for Cory’s support for the Iran deal – is misguided, wrong-headed, and beside the point.

Judaism as a religion does not second-guess people’s motives and gives individuals the benefit of the doubt. I utterly reject any notion that Cory played politics with the survival of the state of Israel and the security of the American people. What’s important is not why good friends of Israel like Cory voted to legitimize Iran but rather that their support must surely be seen, even by them, as a catastrophic mistake.

In the last two weeks alone Iran has illegally tested long-range ballistic missiles, which directly contravenes UN Security Council resolutions, brutally imprisoned another innocent American, sentenced two poet-protestors to floggings and lengthy prison sentences, and, according to The New York Times, “executions have surged in Iran and oppressive conditions for women have worsened.” Whoa. That’s a lot of monstrous acts in just a few weeks. But for Iran, brutality is par for the course.

So much for President Obama’s insinuation that Iran would moderate once the deal was signed.

Many supporters of Israel have written to me complaining about why I vouched for Cory for more than two decades, ever since he served as my student president of the L’Chaim Society at Oxford University in 1993. I have seen an avalanche of anger pour out from the Jewish community who were once awed by Cory’s special friendship with our community and his regular Torah study with me, expressing feelings of hurt and betrayal. They have asked how Cory could have supported a deal that gives Iran $150 billion to kill people in acts of terror? This anger has only increased with the recent wave of stabbings and murders of innocent Israelis, which many surmise came in the wake of the Iran deal and the evisceration of American Jewish political power.

But how does one walk back the legitimacy given to Iran?

When it comes to close friends of the Jewish community who supported the deal, there are two paths open to us. The first is the path of sycophancy and obsequiousness. To simply overlook the support that our elected officials gave to the Iran deal is unacceptable, even as we witness brownnosers in our community who will do anything to curry favor and retain access to those in power.

Over the last few weeks I have watched Rabbis and other communal leaders embarrass themselves in offering political cover to those who voted for the deal.

Over the last few weeks I have watched Rabbis and other communal leaders embarrass themselves in offering political cover to those who voted for the deal. Toadying to the powerful betrays the values and interests of Judaism and the Jewish people. It’s lowly and unacceptable.

This past Sunday the town of Englewood, NJ, held a “Get Out the Vote Rally with special guest Senator Cory Booker.” The invitation was sent to the Jewish residents of the city in the typical politically tone-deaf manner you would expect from a town that for decades has experienced one-party rule. Rabbis who had strongly preached to their congregations against the Iran deal lined up to praise Cory publicly and ask for political favors, albeit for what they said were noble ends.

They did not learn the lessons of history. In the epic battle during the holocaust between Rabbi Stephen S. Wise and Peter Bergson, Wise’s argument was that American Jewry dare not pressure FDR to stop the slaughter of European Jewry lest we lose political access. But Bergson, who publicly pressured FDR non-stop, was right and his efforts led directly indirectly to the saving of more than 200,000 Jews through FDR’s creation of the War Refugee Board. Wise’s name today lives in infamy for the political cover he granted FDR in his refusal to bomb the Auschwitz death-camp or the train tracks that led to it.

Cory is one of my dearest friends and our community must endeavor its utmost to bring him back to strong support of Israel and opposition to public calls for genocide against any people. Those efforts are undermined by fawning, kowtowing, and groveling that show him and other elected officials that there is no price to pay for legitimizing a genocidal government.

But to sever our ties with good friends like Cory who have always shown our community genuine love and affection is likewise something that we must absolutely avoid.

Every day Jews are stabbed, slashed, shot, and murdered on the streets of Jerusalem, Tel Aviv, and Beersheba. And every day the world lies about “violence on both sides,” as if Netanyahu and Israel are inciting Jews to take knives and stab Palestinians the way that Palestinian clerics on the PA payroll and Mahmoud Abbas are doing about Jews.

There can be only one conclusion. Jewish blood is cheap and getting cheaper by the day. I know of no other ethnic or religious group on earth who face daily incitement to genocide with the world making not even a peep of protest.

And here is where there is a path back for good friends of our community like Cory, Debbie Wasserman Schultz, Jerry Nadler, and others to right a terrible wrong. After they voted to legitimize the single most brutal government on earth, they must, at the very least, speak out, on the Senate and House floor, against Iran and Hamas’ genocidal intent against the Jewish people.

I call upon Cory, who remains a soul friend, to take the Senate floor and denounce once and for all the genocidal threats that Iran makes against Israel and demand that President Obama do the same. He should simultaneously introduce legislation that makes it unlawful for the United States to retain ties with, or fund, any entity that calls for the annihilation of the Jews and Israel. This would mean making it illegal for Hamas, who now receive hundreds of millions of dollars in US aid, to obtain another penny until they revoke their genocidal charter calling for the murder of the Jewish people wherever they are found.

It would mean keeping all sanctions against Iran in place so long as Iran’s Supreme Leader Ayatollah Khamenei continues to call for “the annihilation of the Jewish state” and insist on the religious “justification to kill all the Jews.” Echoing the Nazis, Iranian leaders have referred to Jews as “filthy bacteria,” and Israel as “a cancer that must be removed.” Cory, are you listening? Then do something about it.

It would also mean defunding the Palestinian Authority until Mahmoud Abbas repudiates his public call to murder Jews which he gave on September 17 on Palestinian television: “We welcome every drop of blood spilled in Jerusalem. This is pure blood, clean blood, blood on its way to Allah. With the help of Allah, every martyr will be in heaven, and every wounded will get his reward.”

President Obama’s silence on Iranian calls to genocide will forever tarnish his legacy.

And if it means that the President and members of his party will be annoyed at Cory, so be it. Protecting innocent life trumps party loyalty, be it Democrat or Republican.

The administration’s refusal to even once condemn Iran’s threats to murder all of Israel’s Jews is an immoral omission destined to forever live in infamy. President Obama’s silence on Iranian calls to genocide will forever tarnish his legacy.

Irwin Cotler, the former Canadian justice minister and one of the world’s great defenders of human rights observes that “the Holocaust – and the genocides that followed in Srebrenica, Rwanda and Darfur – occurred not only because of the machinery of death, but because of state-sanctioned incitement to genocide.” When repeated threats to genocide are ignored, they permeate the consciousness of the body politic circumventing any moral filter. It is not long before words are translated into action. The population becomes desensitized to death.

Hitler was the most evil man that ever lived. But once he began the final solution even he masked his mass murder of the Jews. But Iran boasts of its planned extermination of Israel in plain sight.

Good friends of Israel approved the nuclear agreement, but their support for Israel in other areas does not absolve them of the failure to speak out against Iran’s desire to exterminate the Jews of Israel.

And slowly, with action rather than words, we can all begin to rebuild loving relationships and special friendships.

Support for Israel must never be a partisan issue. Whenever people say to me that Republicans are better friends to Israel than Democrats, I remind them that arguably the single greatest friend of Israel in the entire United States Senate is a Democrat from the State of New Jersey.

His name is Robert Menendez.

I believe and trust that with time and experience Cory will ultimately follow the path his senior colleague has trail blazed in standing up to tyrants and fighting for liberty the world over.

The Washington Post calls Rabbi Shmuley “the most famous rabbi in America.” He is the founder of This World: The Values Network, one of the world’s leading organizations defending Israel in national media. The international best-selling author of 30 books, he will shortly publish, “The Israel Warriors Handbook.” Follow him on Twitter @RabbiShmuley. 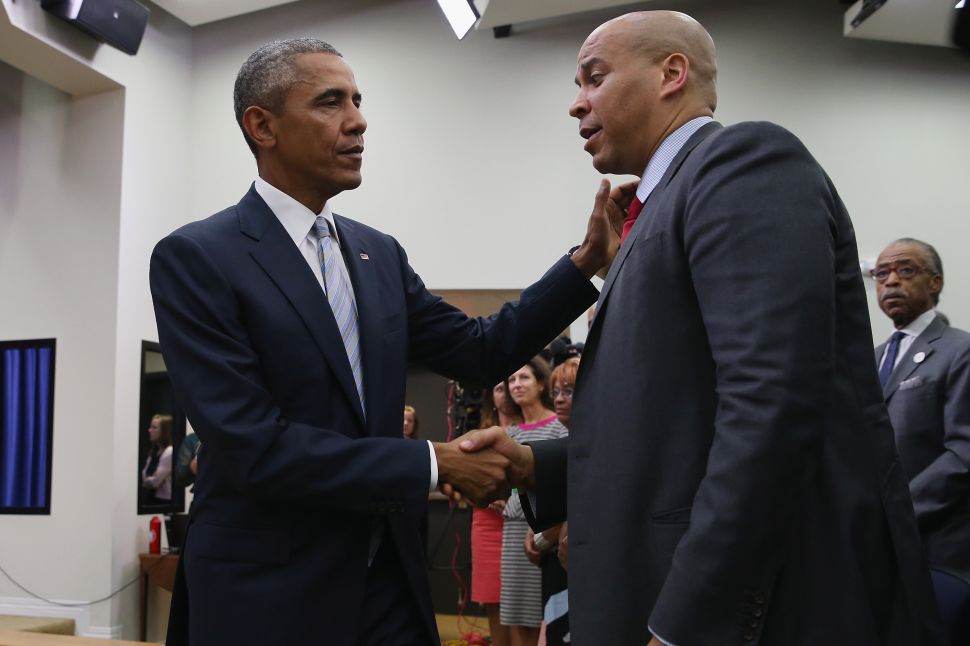