Since the Kremlin’s seizure of Crimea in March 2014, setting off what I’ve termed Cold War 2.0 between Russia and the West, propaganda has played a key role in President Vladimir Putin’s new aggressiveness. There’s general consensus that the Kremlin’s weaponized propaganda represents a significant component of Russia’s arsenal in the shadow conflict of ideas, information, espionage, and secret warriors that I’ve called Special War.

How the Kremlin employs propaganda to create favorable political conditions for Putin’s revanchist aims has gotten a lot of media attention, and rightly so. Flush with cash, since the former KGB colonel Putin understands the importance of agitprop, Russia’s propaganda arsenal encompasses a wide array of outlets, aimed at various audiences around the globe. Americans are most familiar with English-language networks like Russia Today (rebranded as RT) and Sputnik.

Both have considerable online presence and they disseminate unfiltered Kremlin propaganda with aplomb. There’s a gullible Western audience for this unsubtle agitprop, despite the fact that they’re highly questionable outlets. RT employs avowed neo-Nazis and even has an Illuminati correspondent, while Sputnik recently has engaged in outright genocide denial. If you like nuance in any form, these Russian networks are not for you.

This is merely an online version of the well-honed Cold War practice of what Kremlin spies term Active Measures, meaning the dissemination of lies and semi-lies at the West for political effect.

There’s really nothing new about this except how the Internet gives such propaganda unprecedented reach, quickly. This is merely an online version of the well-honed Cold War practice of what Kremlin spies term Active Measures, meaning the dissemination of lies and semi-lies at the West for political effect. More properly it’s called disinformation – dezinformatsiya or deza for short among Kremlin insiders — a murky amalgam of fact and sordid fiction.

Moscow churned out disinformation down to the collapse of the Soviet Union, often with success. They had little trouble finding credulous Western media willing to report their deceptions uncritically. One of the KGB’s more notorious lies of the 1980s, that the American government maliciously created the AIDS virus, still reverberates today in certain quarters.

While there’s broad agreement today across NATO that Putin’s disinformation machine needs to be resisted, since its lies often have potent effect – for instance, rank Kremlin untruths about the downing of Malaysian Airlines Flight 370 over Ukraine in March 2014 continue to be repeated by gullible Americans like former Rep. Ron Paul – what exactly is to be done remains difficult to pin down.

To their credit, the Europeans have begun to fight back against Kremlin lies and spin, at least to some degree. The European Union understands that the truth, per the cliché, is the best disinfectant of noxious Moscow lies, so the EU recently created a small team of Russian speakers to counter Kremlin agitprop.

This effort, composed of no more than ten people, is not intended to engage in pro-EU propaganda, rather to expose Kremlin disinformation that’s aimed at Europe – a critical distinction. To anybody who cares about the truth and wants to prevent unauthorized visits by Putin’s “Little Green Men” to any EU or NATO countries, this should be regarded as a step in the right direction, however modest and small.

Sadly, Washington, DC, is doing even less than the Europeans are to combat Russian disinformation. Although President Barack Obama has publicly noted the malign impacts of Kremlin spin, noting the “absurd” nature of much Russian propaganda, and the administration behind closed doors has shown intermittent interest in fighting back, no concrete action has followed over the many months since Putin snatched Crimea from Ukraine.

The story of how Obama has failed to fight back against Russian propaganda is a depressingly typical one for this White House: a threat is recognized, then publicly denounced, some activity follows, only to be dropped due to a lack of interest, courage, and follow-through.

Perhaps the worst part of this unsatisfying inside-the-Beltway saga is that we know how to fight back against Kremlin lies, there’s no need to reinvent the wheel here. Back in the 1980s, when KGB disinformation was at its peak, the Reagan administration created the Interagency Active Measures Working Group, led by the State Department and the U.S. Information Agency, to counter Soviet propaganda. Using truth to fight lies, it became something of a model of how to debunk Kremlin disinformation without resorting to propaganda oneself. Let the facts speak for themselves was their watchword, and it worked.

Nothing more is needed now than to replicate the solid work of the Active Measures Working Group, sped up for the Internet age. To be fair to the White House, there are obstacles in the path. The disestablishment of USIA under President Bill Clinton, reducing its vital information mission to a mere appendage of the State Department, must be regarded as a bureaucratic error of the first order. Moreover, only a tiny handful of veterans of the Active Measures Working Group remain on the job today. Retirements and death have taken their toll.

Is anybody in the U.S. government authorized to debunk Putin’s lies – if so, who? If not, why not?

That said, there’s no shortage of talent available to counter Kremlin propaganda today, only a lack of bureaucratic will. Nearly a year ago, the State Department created a Counter-Disinformation Team, inside its Bureau of International Information Programs, as a small, start-up effort to resist Russian disinformation. Consisting of only a handful of staffers, it was supposed to expose the most laughable Moscow lies about America and the West that are disseminated regularly via RT and other outlets. They created a beta website and prepared to wage the struggle for truth online.

Alas, their website never went live. Recently the State Department shut down the tiny Counter-Disinformation Team and any efforts by the Obama administration to resist Putin’s propaganda can now be considered dead before birth. Intelligence Community sources tell me that it was closed out of a deep desire inside the White House “not to upset the Russians.”

Meanwhile, at the State Department, the senior official involved is Rick Stengel, the Undersecretary for Public Diplomacy and Public Affairs, a veteran journalist who was brought into State two years ago, leaving his job as TIME’s editor. His appointment raised concerns about the revolving door between the White House and the mainstream media, but Stengel is someone who should understand the importance of new media in the global information struggle being waged today.

Apparently, however, he – or someone else – does not. What role, if any, Stengel played in shutting down the State Department’s tiny effort to resist Kremlin lies is unclear. A lot about what happened here is murky and Congress may want to ask a few questions about this sorry tale of governmental dysfunction.

Who killed the Counter-Disinformation Team and why? What did the team produce during the time it existed? What has become of this product? How many people were on it? Does the State Department not consider countering Kremlin disinformation to be in its remit? Does the White House agree? What about the National Security Council? Is anybody in the U.S. government authorized to debunk Putin’s lies – if so, who? If not, why not?

It’s clear that Barack Obama rejects the notion that we are in any Cold War 2.0 with Russia, Putin’s recent military moves in Syria notwithstanding, even though a great many foreign policy mavens would disagree. All that can be stated for certain is that it’s a sad day when the European Union, perhaps the most risk-averse and bureaucratically arteriosclerotic organization on earth, can manage to fight back against Kremlin disinformation while Barack Obama, twenty months after Putin seized Crimea, still cannot be bothered to. 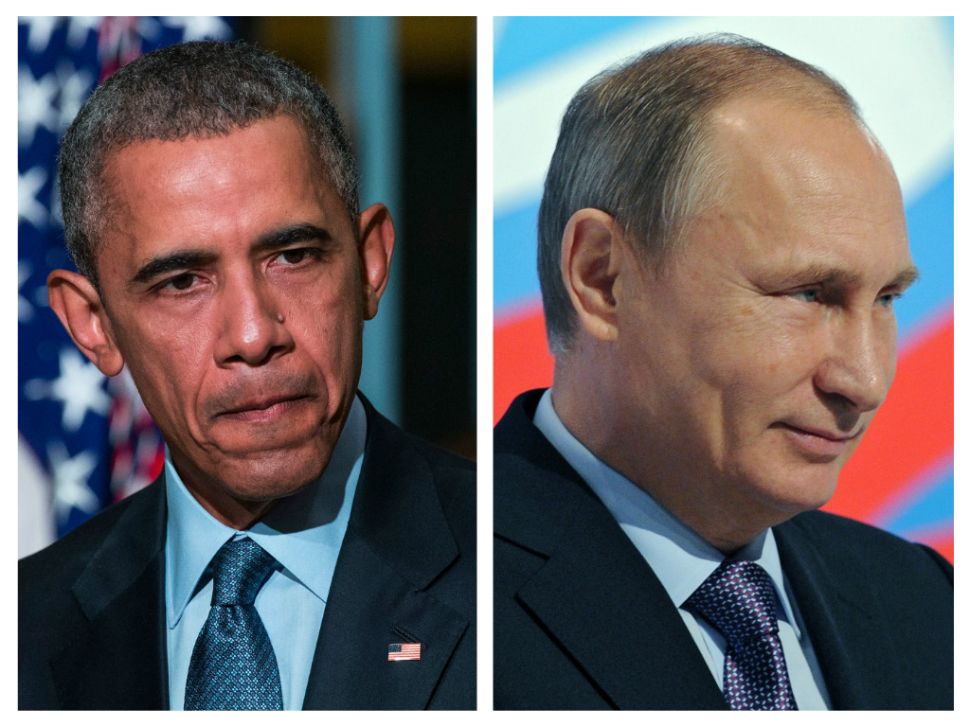