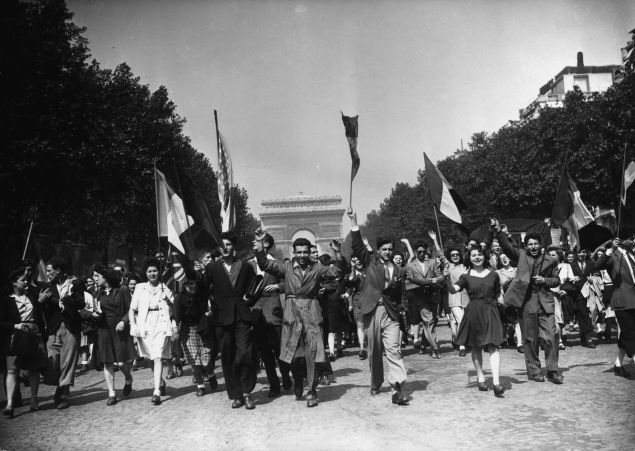 As the bodies of the dead are laid to rest on earth and their spirits ascend to be welcomed by their Maker in heaven, the City of Light is being liberated from terrorists in November 2015 as it was Liberated from Nazis in August 1944.

While the decent people of the world trembled with horror and rage after the latest barbarism that we are all in this together to destroy, we should rise with admiration and salute the men and women of Paris who keep alive the timeless traditions and spirit of humanity and France to liberate that magnificent and extraordinary place called Paris—again—from the tyrannies of hatred and fear.

The writer is Ernest Hemingway, who battled alongside novelists and shopkeepers and poets and workers and the exhausted but unyielding heroes of the French resistance who achieved one of the great victories in the history of freedom when the people reclaimed Paris from the Nazis in August 1944.

In the 1940s the rich and famous joined the poor and downtrodden to prevail in the great cause of their times.

I am two-thirds finished writing a historical fiction novel and motion picture screenplay that moves between the New York of the recent financial crash, where my protagonists and lovers begin with the agony and misery that came with the crash, and are taken back in time, by a fictional but historically true Ernest Hemingway, to fight with the French in the liberation of Paris during the Second World War.

I thought about this when I took great joy in reading that Parisians were acting in protest against fear and with hope for their future to buy A Moveable Feast.

Doing research for my novel what I learned, and became consumed by and immersed in, was the degree that in the 1940s—when they were all in this together to save humanity from fascism—the rich and famous joined the poor and downtrodden to prevail in the great cause of their times. 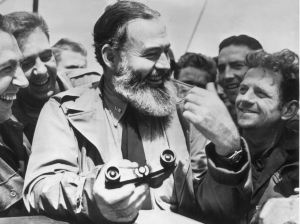 1944: American writer Ernest Hemingway with US soldiers, in his capacity as war correspondent, on their way to Normandy for the D-Day landings. (Photo: Central Press/Getty Images)

It is possible to write a historical fiction novel about those days that includes as much true history as pure fiction and in their own way—in real time before our eyes today—that is what the good, noble and courageous people of Paris are doing as we offer them standing ovations and support in every way we can.

When we see Parisian writers fearlessly put their talents in the service of a magazine under attack by terrorists we might remember the great writer Albert Camus—who later famously wrote that he would like to love his country and still love justice—who edited the French resistance journal Combat as he defied the Nazi butchers under penalty of death if the butchers had found a way to stop him.

When we see Parisian lovers today holding hands while they lay wreaths to honor those who have made their journey to heaven— without fear of the terrorists who could be targeting them as they honored those who are gone—we might remember the great Frenchmen Jean Paul Sartre and his lover the great French patriot Simone De Beauvoir in 1944 as they held hands and joined hearts to free Paris from the genocidal murderers who gave the world Auschwitz and Buchenwald.

When we witness today the singers who perform in the cabarets and concert halls and on the subways and streets of Paris, as you read these words we might remember the indescribably brilliant artist Edith Piaf—one of the great talents in the history of song—who put her voice and body in the service of the cause. 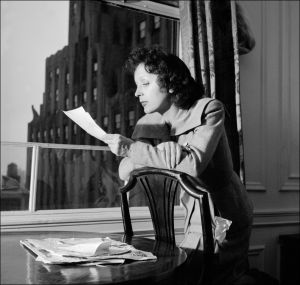 Here is a true story of Ms. Piaf. During the war she performed at German POW camps for the allied prisoners and was photographed with Nazi officers.

For a brief time after the war she was attacked by the ignorant for being a collaborator, until brave soldiers of the French resistance rose to her defense with a fury and passion that brought to life one of the greatest truths of her life story—a life story that brought her from the gutters of virtual homelessness to the stage at Carnegie Hall, which was this:

When she was performing at German POW camps and being photographed with Nazi officers she was secretly collaborating—not with the Nazis but with the French resistance! Edith insisted that prisoners be included in the photos, which were ultimately shared with the resistance, whose wizards edited out the Nazis and turned the cropped photos of the POW’s into fake IDs and passports that were smuggled back into the POW camps to help the POW’s escape!!!

When we watch Parisians attend the concerts and plays and films at places no different than the places where the innocent were massacred on that dastardly Friday, they are no different than those Frenchmen and Frenchwoman who visited similar places under close watch by the Gestapo, to exchange illicit messages often in code to spread the world of the resistance, defying Nazis in their times as Parisians in those places defy terrorists in ours.

When Parisians today buy Hemingway in droves they are doing something that is universal but also particularly French, creating a unity between art and action, between literature and life, between the creativity of the mind and the courage of the body that we witness every day in real time as they reclaim Paris from the gangsters, goons and genocidal maniacs of ISIS.

One of the great moments in literary history occurred at the Ritz Hotel in Paris hours after the liberation. J.D. Salinger, then known as Jerry Salinger, was a twentysomething man and little known writer who witnessed indescribable carnage when he landed at Normandy and fought battles across the combat fields of France.

After the liberation young Salinger went hunting for his literary hero, the Hemingway who was then at the peak of his power and fame. Mr. Salinger found Mr. Hemingway at the Ritz—two writers and warriors, one of the most famous writers of the century and the other an unknown young man.

Today’s battle will not be won in a linear war with a clearly defined ending.

Somewhere in Paris tonight there are most certainly young men and young women sharing stories of war they are fighting today, sharing their resolve to defeat those whose carnage would kill our people. Names we do not know will someday share their stories with the world and become the literary lions or political leaders of the future—made stronger and wiser by the experience they share today and will surmount tomorrow.

Parisians and those who cheer them and stand with them from around the world, are reviving that spirit that we are in this together—a spirit that was widespread in the 1940’s but is all too rare in our age of partisan venom, political vindictiveness and political appeals to racism, bigotry and fear.

In the liberation of Paris in 1944 the great artists of the time played a central role. Ernest Hemingway did in fact fight with the French resistance while Albert Camus did in fact write appeals for freedom in a journal outlawed by fascists. Andre Malraux and Jean Paul Sartre did in fact risk their lives for the freedom of France—alongside the multitudes of French men and women who can be viewed on thrilling video on You Tube, standing on both sides of the street cheering wildly and crying with joy and laughing with ecstasy—as the Free French Army marched into Paris on the day that the liberation of Paris was won.

Today’s battle is different, but identical in nature. Today’s battle will not be won in a linear war with a clearly defined ending. With Washington and New York now threatened again, the danger to America grows again, and we must seek to find a national unity and resolve and courage and spirit that is not in the nature of our bitterly divided country.

Paris was liberated from fascism in August 1944, and while we share the horror of the crimes against Paris in November 2015 we share the honor being present to witness—before our eyes in a real time experience through pictures captured by modern media—the new liberation of Paris by the people of Paris who are being cheered in heaven by those who rose to the occasion in 1944 and shared with Parisians today the timeless truth that the City of Light will live forever. 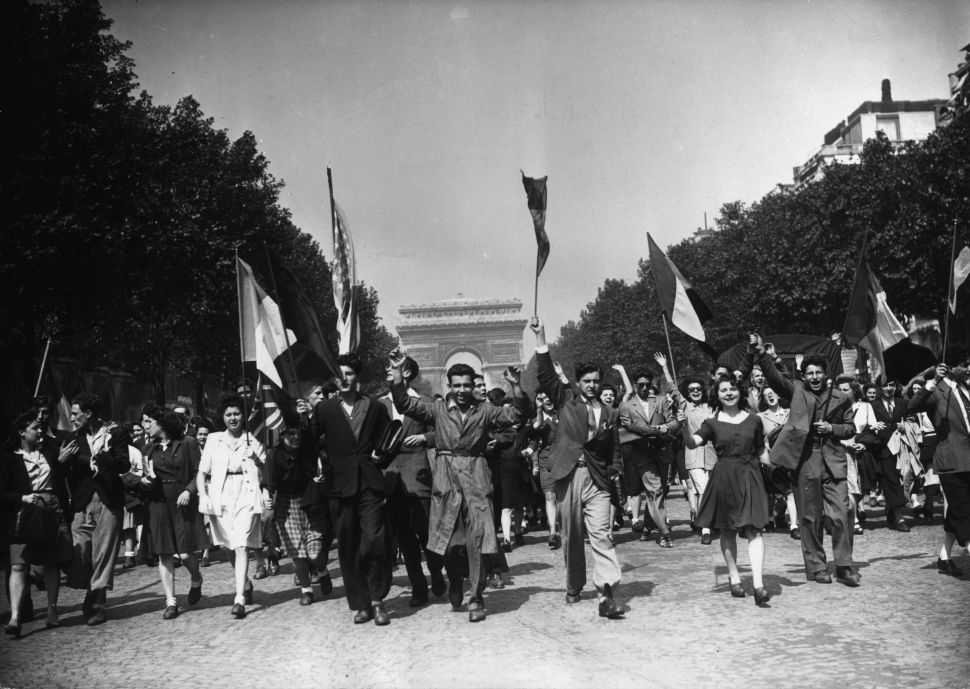